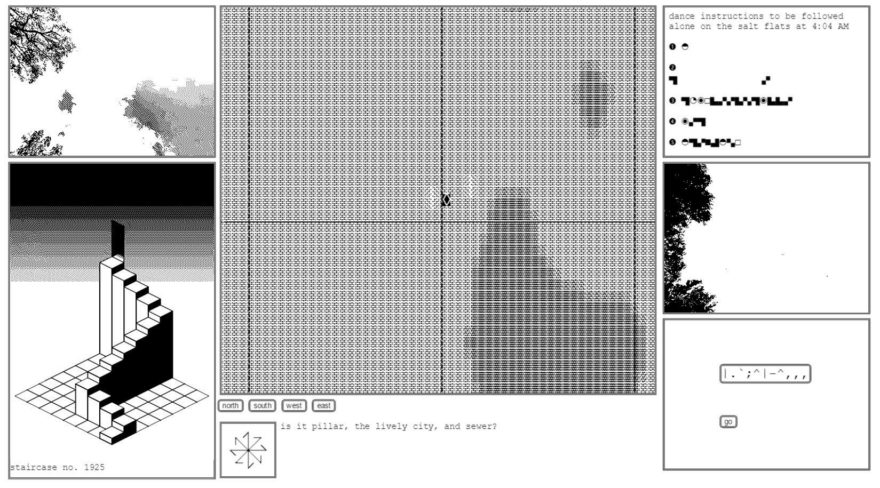 What is a city? It’s a question we rarely consider: that word, city, being such a useful label for the dense, multi-layered, contradictory, opaque, ever-changing, utopic, perverse, magical, and mundane piles of decaying masonry where most of the world’s population spend their lives. A city can be a landscape, or a home, but it can also be an instrument, played by a multitude, a fiction re-enacted daily by its population. Describing a city is a fool’s game, as you can see, with most descriptions simultaneously too big and too small to encompass the idea of a city. But perhaps that is what a city is—an idea, collectively held, prone to transformation.

Loren Schmidt and Katie Rose Pipkin’s procedural project, Inflorescence City tunnels into this concept of a city as a transforming transient idea: something that cannot be looked at directly, lest it disappear from existence entirely.

A constant narration of disjointed text

Built around procedural words and images, generated through carefully sculpted algorithms, Volume 1 of the project presented an endless set of catalogs for imaginary cities, strange publications of articles, interviews, indexes, lost property, and library lists. It feels linked to the literature of Jorge Luis Borges and Italo Calvino, but also to the procedural text experiments of John Cage and Jackson Mac Low. It created not a city, but a ghost of a city, linked to a body of juxtaposed word and image.

Volume 2 has now joined it, and it resembles a city in perhaps a more conventional way. Like a concrete city it has directions—north, south, east, and west—and what appears to be map. It can be explored, walked, and it can be discovered. But perhaps more importantly it is populated by stories. These stories appear in the same procedurally generated, fragmented language of the first volume, but untethered from the linear structure of their publication, they float free in this nebulous landscape, ready to be connected by the player’s wandering movement.

Over time, backed by a hypnotically shifting soundtrack of harmonic tones, something begins to emerge. A collection of artefacts and parables, some sculptural forms and unclear motifs. A constant narration of disjointed text, running along the bottom of the map, like the ramblings of a lost citizen.

Inflorescence, for what it is worth, means “the process of flowering”, and what flowers here is an open space of potential connections, a place to play a little while and draw your own links between the words and ideas that lie all around you; like the debris of a million half-finished lives. What is flowering here is a city, whatever that might mean.

You can play Inflorescence Volume 2 in your browser with this link.