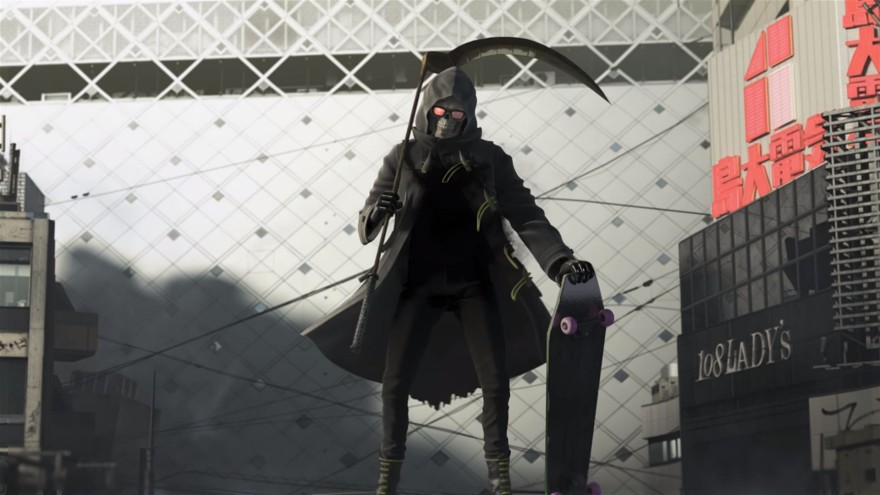 It is rare that a piece of key art is worthy of comment. That ugly, industry-saturated term, “key art”, tells the whole story, bringing to mind images of focus testing promotional images usually of men with guns facing away, silhouetted in the light of an explosion. But this bit of key art, this is something special. Let’s just lay it out here, for your enjoyment.

Observe the faded tones, the dappled light. Look on the grim reaper, posed classically, one hand stretched towards a prostate victim. Take in the towering pile of city, punctuated with plumes of smoke, the distant towers of a modern city all around. What a vision in digital paint. This is the key art for Let it Die, the upcoming hack-and-slash RPG from Suda 51’s GrasshopperManufacture, and it is more than a pretty picture. It may strike you as familiar, the forms and colors recognizable somehow. That’s because this piece of art is a paintover.

Above is Pieter Bruegel the Elder’s Tower of Babel, painted around 1563. Note the warm tones, the dappled light. Look on King Nimrod, surrounded by his retinue of architects, reaching towards a grovelling builder. Take in the tower, its arched forms spiraling towards the sky. Now look at the line of scaffolding on the bottom left of the tower. Fix it in your mind. Now scroll back up to Let it Die’s key art. Scroll up and down a few times. Look at the raft turned to a dock. The winch integrated into a roller-coaster. The tools lying on the closest slab, now receding under accumulated dirt. The hill in the top left. The red stone in the center. Nimrod himself turned to the figure of death. Grasshopper didn’t just copy Bruegel, they iterated upon him, sketched out a tower of Babel 500 years later, their brushstrokes covering his.

But what are we actually looking at? Is it a lazy artist daubing over the work of a master, or a complex set of references, overlaid and interlocking? Does it help to know that Let it Die’s central city-tower seems to be an arena of battle, a place for warriors to test their strength, and that Bruegel’s tower of Babel was based on that most infamous of all arenas, Rome’s Colosseum? Perhaps things might be clearer if I pointed out that Bruegel was victim of one of the most famous acts of overpainting in art history, when his Massacre of The Innocents (1565-67) was, at the Holy Roman Emperor’s instruction, modified to have its dead babies and speared children replaced with animals and sacks of grain.

It’s tempting to imagine Let it Die’s art as a network of these ideas and images. That its overpainting is a reference to Bruegel’s censored violence and that its city-arena is connected to the folly of Rome’s gladiator battles. It wouldn’t be out of character for a designer like Suda 51 to be so bold. His existential detective story Flower, Sun, and Rain (2001) riffed on Wim Wenders, the nightmarish Killer7 (2005) finds points of connection with Oscar Wilde’s The Picture of Dorian Gray (1890), and even the grindhouse pastiche Shadows of the Damned (2011) started life as an adaptation of Franz Kafka’s final unfinished novel, The Castle (1926). That book, supposedly Suda’s favorite, might be one of the most distinct indicators of his approach.

there is something hollow here

The Castle is a work that specifically blocks progression, tangling the reader up in subplots and diversions that do nothing to progress the fortunes of its protagonist K. The heroes of Suda’s earlier work—Sumio Mondo of Flower, Sun, and Rain and The Silver Case (1999), The Smith syndicate of Killer 7—are equally lost, knowing less than the player, stumbling through endless increasingly surreal tasks. Even Travis Touchdown’s quest for the position of number one ranked assassin in No More Heroes  (2007) might be seen through the same filter, his challengers constantly diverting him on bizarre side stories. It is tempting to imagine Let it Die as another potential work in this vein, rich, surreal, jammed with references, but it is also naive.

Here is Let it Die’s city of babel again, darker, foggier, more like a thousand Kowloon Walled Citys piled on top of each other than a Bruegel painting. And here is Suda as we know him, ramming that city with stylish violence, freakish horrors, and at the end of the trailer a Daft Punk anime crossover. Our figure of death? He’s got a skateboard now. This kind of tonal insanity is what we’ve come to expect from Suda, and yet there is something hollow here. Perhaps it’s the fact that Shadows of the Damned, Kafka-inspired or not, was an oddly misogynistic mess of a game. Or that Killer is Dead (2013), his supposed return to Killer 7’s masterful form was an even more misogynistic collection of self parodying non-sequiturs that rang hollow at every beat. In fact, by my count, it’s been almost 10 long years since Killer 7, and while No More Heroes went some way to filling that gap, its otaku-obsessed, non-stop pop-culture remix felt like a side project. A Chungking Express (1995) to his In The Mood for Love (2000), so to speak.

Yet here we are, Bruegel on screen, playing that game again. Trying to unpick the references and the details, expecting something mind-blowing to emerge from the synergy of high and low, ugly and sublime. We want Suda to be an auteur, a genius, we want his games to blast through our optic nerves and into our brains like napalm. Here I am overlooking over the dreary screenshots, and the free-to-play mechanics, and thinking to myself, could this be Suda’s Dark Souls (2011)? Lets face it, in reality this key art is the work of an unknown (and seemingly talented) artist at Grasshopper, who probably did a Google Search for “tower of babel” and downloaded the Bruegel to work it over. Right? But we want it to be Suda, we want it to be great. As Kill Screen’s Zack Kotzer put it in a late night conversation:

‘I miss the old Suda, the Sun and Rain Suda

I hate the new Suda, the laptop sticker Suda

I miss the obtuse Suda, fast and loose Suda

I gotta say, at that time I’d like to meet Suda

What if Suda made a game about Suda?

Called “I Miss The Old Suda,” man that would be so Suda!’

When I load up the website for Let it Die, death skates across the screen on his board, scythe casually hooked over his shoulder. In his wake some text appears: “Death cancels everything, but the truth.” It’s a William Hazlitt quotation, a 19th century philosopher, painter, and poet; a true renaissance man. When I see it, all I can do is laugh. Suda 51 used a single title to cover all of his early games, a thematic link that tied these often incoherent pieces together. “Kill the past.” Perhaps Suda should follow his own advice. Perhaps it’s time we let Suda die.