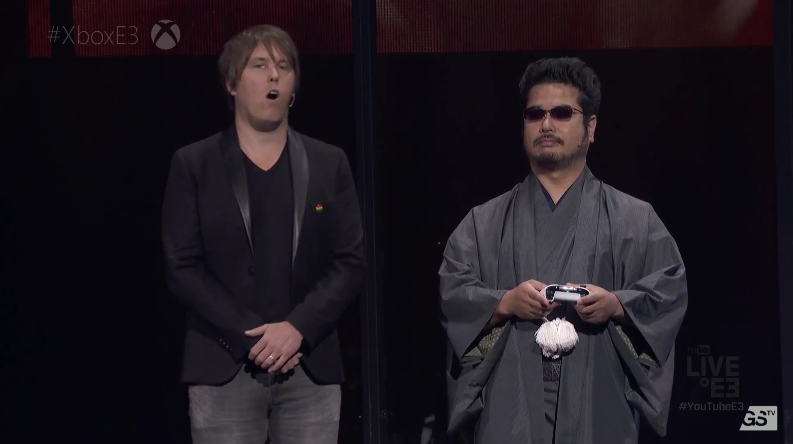 We still live in a glorious time for mediocre fashion. Russell Westbrook notwithstanding, all it takes for a man to be deemed a good dresser is baseline competence: if your clothes vaguely fit, you’re stylish. This, incidentally, is the bigotry of low expectations or, to use a trendier term: male privilege.

Here, for your sartorial pleasure, is one Hideo Kojima:

He’s giving the thumbs up and so are we. Everything fits, which is a good start. It all matches, which is easy enough when everything is black. There are, however, some pops of color that prevent this from being a soporific display of competence. The sunglasses are the obvious pick—reflective and blue and about as inscrutable as a VR headset. Though the glasses grab your attention here, the real difference maker is the green wristband, which adds a pleasingly anarchic touch to an otherwise regimented look. This little touch makes up for the otherwise unimaginative shapes.

Here, presenting for Bethesda is every dude in every nightclub ever. I’m told his name is Raphael Colantonio, but really there’s no reason to get bogged down in specifics:

You may be sensing a pattern here. Another jacket. Another t-shirt. What, as they ask on Passover, makes this getup different from Kojima’s? For starters, the sleeves are a bit too long. You can see one riding up Colantonio’s hand beyond his wrist even though his arm is bent. The sheen of the jacket also doesn’t work under this lighting; it comes off as grey as opposed to just shiny—an impression not helped by the grey shirt. It’s all just a bit washed out. But the rainbow pin is nice.

Let’s pick things up a little. Here’s Palmer Luckey of Oculus fame (can you call it fame?):

Ignore the chyron. Palmer Luckey is on the left, though the thought of him in E3’s de rigueur jacket and t-shirt look, instead of an untucked shirt, is the closest any of us have yet to come to virtual reality.

Let’s take a break from jackets and re-enter the wonderful world of hoodies with Craig Duncan of Rare:

This is perhaps the most compelling argument yet that one does not simply become Mark Zuckerberg by wearing a hoodie. What fresh hell is this, both short in the arms and wide in the shoulders? Bill Belichick would approve, and that’s never a good sign. Is it zipped? Is it unzipped? Do we really want to see more of that t-shirt anyhow?

Back to the jacket/t-shirt category, and back to Bethesda:

That is not a t-shirt; it’s an undershirt.

One more for the road:

Note the look of resigned sadness on his face. Note the asymmetrical sweater. It is almost… interesting? Not stunning, but at least a compelling shape, which is shockingly hard to come by at E3. The headphones, well, they’re huge and no matter how many ads Beats bleats, are not fashion. They’re just big. But this is an excellent look for going to the airport. Good enough.

BUT WHAT DOES THIS ALL MEAN???

The jacket and t-shirt look never gets old, at least in certain circles. It is unambiguously old, but E3 will never let it die. And fine. Whatever. Wear whatever makes you comfortable. But the striking thing about E3 menswear is that an event that presents all manner of creativity and imagination has so little of it on stage. There is so little dreaming about shapes and textures and color when watching E3 streams—and then there’s the fashion, which has even less. It’s bleak. Competent but bleak. The fashion at E3 doesn’t really happen. It never does. But it’s a metaphor for much of E3, an event of boyish and unimaginative professionalism. At least it’s over until next year?