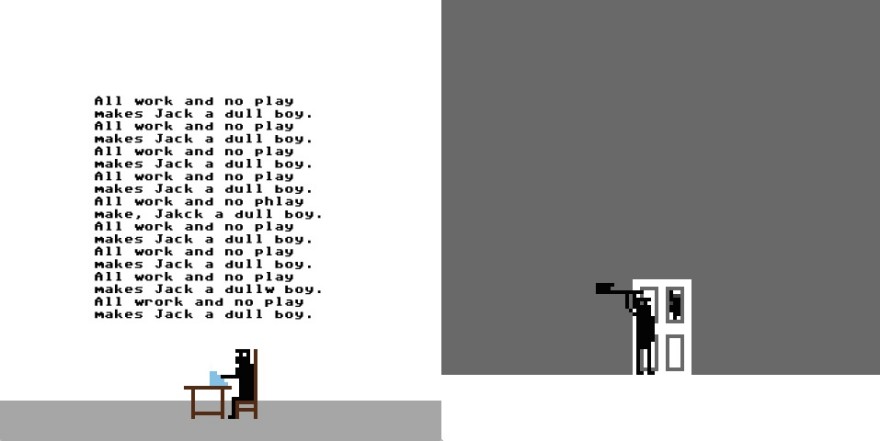 Fans of Stanley Kubrick’s cinematic adaptation of Stephen King’s horror-drama The Shining have obsessed over the finer details for years. You don’t have to search for long to find some of the wilder theories. There’s an hour-long documentary called “The Shining Code” about how people have decoded messages in the film. They believe that hidden in the mise-en-scene are signs that Kubrick is trying to tell the viewer that the original moon landing was faked. That’s only the start of it.

So it stands to reason that a videogame adaptation of The Shining should at least attempt to honor the thoroughness both its director and its viewers have engaged it with. Pippin Barr, the creator of Let’s Play: The Shining, isn’t one to let us down. While its Atari-like skimming of the film into iconic, bite-sized scenes is obviously simplistic, with what he has forged through computer code and pixels has been given the adequate consideration.

One look at Barr’s development blog will tell you this much. In one entry, he writes about how he wanted to ensure that the scene in which Danny rides his tricycle around the spacious corridors of the Overlook Hotel, encountering the twin girls for the first time, was as “true” to the film as possible. He recalls how he initially had Danny’s sprite revert to the idle frame when stopped by the twins, but he felt this didn’t reflect the “emotional impact” of that sudden halt in the film. “Which meant that in the game you shouldn’t play a separate idle frame, rather you should stop the animation at the precise frame when the twins appear and Danny stops—whatever position his peddle is in,” Barr reasons.

interactions as sharp as the blade of Jack’s axe

Due to Barr’s meticulous contemplation, it becomes the subtleties of the actions that you perform in Let’s Play: The Shining that render it a satisfying adaptation. Barr’s interactive version of the scene in which Wendy is backing away from the maddening Jack up a flight of stairs, wildly swinging a baseball bat at him, captures the violent play between the two characters at this point. Assigned to different keys, you claw at the empty air with Jack, and clobber it with Wendy—after each failed attempt at contact, they move upwards in unison as if performing a dance.

Barr even manages a worthy tribute to the film’s most well-known scene. You know it: “Heeeeere’s Johnny!” Before that line is snarled in the film, Kubrick had the camera stick like glue to the weighty to-and-fro swings of Jack’s axe as he winds it up behind him and then throws it against the bathroom door. It’s almost dizzying as you watch it due to the rapid movement. Barr’s version draws attention to that huge shape made with Jack’s arms by dividing it into a motion of four parts, each one tied to an arrow key. It means you have to feel out the circle with your fingers again and again, hacking at the door with all the labor it demands, until the wooden panel has been opened up.

With The Shining broken down to only a few scenes characterized by a number of interactions as sharp as the blade of Jack’s axe, Barr lets our knowledge of the interstitial events billow into the gaps. It probably wouldn’t work without the player being familiar with the story, but even they, the strangers to this fiction, should at least be able to feel the emotions of each scene despite them being wordless and without instruction.

For the most part, that is how Kubrick’s film is impressed upon us too; through the vehemence captured in those long and wide shots, the menace of the hotel found in its stillness. Often, the film leaves us to follow a character as they move around aimlessly, hearing only the sounds around them, the eerie quietude speaking out in volumes. It reflects how family members, who know each other so well, communicate best not with words but with actions (a facial expression can reveal paragraphs of information).

Jack says nothing wrong to Wendy but she reads his behavior as being disturbing. And it’s that pixel-perfect focus on posturing and movement—the readable language of behavior—that makes Let’s Play: The Shining work.

You can play Let’s Play: The Shining for free in your browser.