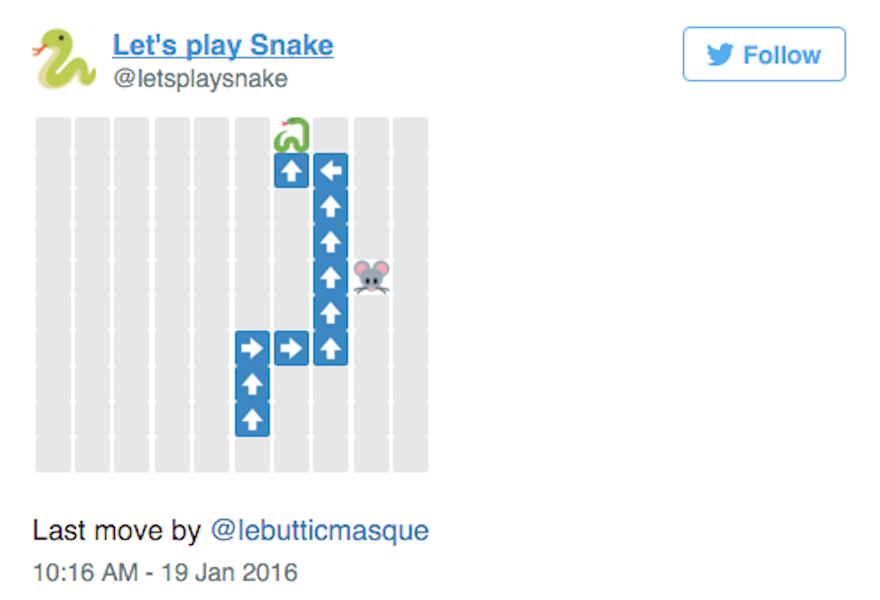 With visuals that can be easily represented using only a line and a dot, and rules no more complex than “get to point b without hitting anything along the way,” classic arcade game Snake has become renowned for its simplicity and elegant design. This, in turn, has lead to its prevalence among a number of platforms, especially those that struggle for visual fidelity, such as graphing calculators and early cell phones. There’s even a version of it that can be played over your favorite YouTube videos. Now, thanks to web developer Yannick Rochat, Snake has been adapted for Twitter.

Rochat’s Let’s Play Snake is played through a computer-run Twitter account that takes the typically real-time game and slows it down to a turn-based format, allowing users to control which direction the titular snake moves by tweeting their desired input at the account. The account will then check for player instructions at regular intervals depending on how far the players have progressed in the game and move the snake accordingly. Fitting for Twitter, the field of play is represented entirely in emoji, with a snake emoji representing the snake’s current position, arrows behind it representing both its tail and past moves, and a mouse representing the goal. Of note is that, in a display of mercy, the original game’s restriction of not allowing players to touch walls has been removed, meaning that boundaries simply move the player to the other side of the screen, like in Pac-Man. In Let’s Play Snake, the only way to die is by colliding with your own tail.

The whole experiment is reminiscent of 2014’s Twitch Plays Pokémon, which functioned in a similar manner, allowing multiple Twitch viewers to simultaneously control a game of Pokémon by entering commands into the chat. The key difference here being that Twitch Plays Pokémon (which is still going on, despite having already achieved its original goal) had a bit more material to work with, narratively. Pokémon may not be the most complex of game worlds, but compared to Snake, its story might as well be Ulysses (1922). One of the more unexpected and fascinating creations to come out of Twitch Plays Pokémon was a complex user lore, in which players refashioned the familiar Pokémon story to suit their experiences playing the game together on Twitch. Telling legends of gods and messiahs, the religious fervor of this user-created context might have seemed an odd-fit for the child-friendly franchise, but it does make a certain degree of sense why a game like Pokémon would lead to these kinds of internet folktales. With its cuddly companions and deep-rooted nostalgia among the millennial crowd, players easily became attached to the characters they fought for control over, helping to cement Twitch Plays Pokémon‘s popularity.

Perhaps the game could more accurately be titled Ouroburos

Let’s Play Snake, working with Snake‘s trademark simplicity, doesn’t have that luxury. What it does have, however, is the chance for biting social commentary. Creator Yannick Rochat, after all, is a postdoctoral researcher from Switzerland’s École Polytechnique Fédérale de Lausanne, focusing on, among other topics, social media studies. In his developer page for Let’s Play Snake, he opens up with a quote from writer Allison Parrish reading “snake is a procedural fable that uses judeo-christian imagery to show the dangers of unchecked growth, i.e., capitalism.” These are big ideas for a game first invented in 1976, but their premise is not faulty. Snake has always been, to a degree, about the stress of success. The more food a player eats, the longer their snake’s own body will get, to the point that it serves as their greatest obstacle. From a design standpoint, it’s a wonderfully elegant way to make sure difficulty increases with skill, but it also means that in choosing to play along with the rat race (quite literal in Let’s Play Snake’s case, with its food being represented by a rodent emoji), they only get closer to consuming themselves. Worse is that, in classic arcade game fashion, Snake can never be beaten so much as just survived for a certain amount of time. Eventually, your snake will fold in on itself. Perhaps the game could more accurately be titled Ouroburos.

There might be an argument to be made here that is fueled especially with the switch to a turn-based system. Granted, in order to allow play through tweets, this was always going to be a necessity. But it also removes the entire challenge of the game, which was originally a reflex test of sorts. Rather, the difficulty in Let’s Play Snake comes entirely from other players. If everyone gets along and works as a team, the game should progress smoothly, maybe even more so than a traditional game of Snake. But for Twitter, that’s an idealistic proposal.

As of now, Let’s Play Snake only has 36 followers, which could maybe be described as the game’s easy mode. Were it subjected to the full force of Twitter, including overenthusiastic fans and other automated accounts, perhaps it might better represent the capitalistic nightmare Parrish describes. In our modern era, views and follows have become a sort of currency of their own, able to buy happiness with exposure and social validation. But that also comes with the risk of being on stage 24/7. After all, once it took off, Twitch Plays Pokémon was only able to beat the game by compromising on the rules that made it so interesting in the first place. In order to appeal to the masses, it had to change what it was. In this scenario, Let’s Play Snake perhaps strikes a question such as: is the only winning move not to play?