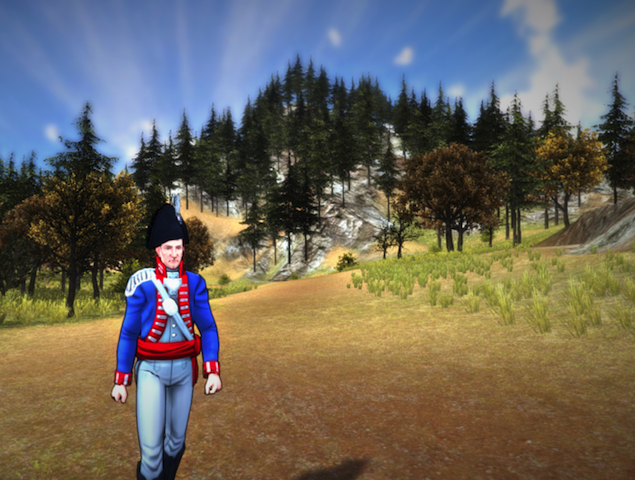 In 2008, after reading Undaunted Courage, Stephen Ambrose’s history of the Lewis and Clark expedition, game designer Joshua DeBonis and his wife took a road trip along the 3,700 mile trail forged by the two explorers. While camping just off the trail in Badlands National Park, they watched a herd of buffalo crest a hill as the sun set.

Moved, DeBonis thought of that herd days later as he climbed to the top of the great Montana rock formation called Pompey’s Pillar. It was from the Pillar, in which Clark famously carved his name, that both he and Lewis famously witnessed the great abundance of the old west; in their journals they both wrote of the thousands of buffalo milling as far as they could see.

“It was so inspiring and intimidating and beautiful and amazing,” DeBonis says. “It became really obvious to me that it was a really great topic for a game.”

That game is Meriwether, the in-development role-player from DeBonis’ company Sortasoft, and it gives you, Meriwether Lewis, command of the Corps of Discovery. The narrative starts in 1803 with Thomas Jefferson’s decision to put you in charge of exploring his newly-purchased Louisiana, and follows your journey to the Pacific and back. Along the way, the player acts as a naturalist, a resource manager, a hunter, and a diplomat with the many Native nations that the real expedition encountered.

Lewis was, DeBonis says, the natural choice for the main character of a narrative game that partially revolves around Mass Effect-style dialogue trees. Unlike the highly extroverted Clark, Lewis was a complex person who “struggled with depression – they would have called it melancholy – and he, at times, genuinely like to be alone in nature.”

The many facets of Lewis’ personality – he was by turns stoic, bullying, detached and emotional – give the player different ways to navigate the many tribulations of the journey; each situation calls for a different tack.

In addition to the third person role-playing sections, Meriwether features so-called “Travel” levels, in which the Corp does its actual journeying. These sections, DeBonis says, owe as much to the old roguelikes as to the Oregon Trail series.

“That game always comes up; it’s an immediate association. But in Oregon Trail a lot of people just focused on the hunting minigame. We are trying to have a holistic experience; our game is extremely historically rigorous.”

Meriwether possesses obvious educational potential, and DeBonis plans to take on a partner to distribute the game to schools, museums, and other cultural institutions. First and foremost, though, the game will be a consumer product, and Sortasoft hopes to publish the game on Steam when they finish it in the fall of next year, assuming they hit their $35,000 Kickstarter target.

The game, which should last from about 15-20 hours, is a hefty undertaking for the six people working on it, some of them part time. But it’s also a passion project, and part of a new crop of games, from the highly mainstream (Assassin’s Creed 3) to the academic-indie (Walden) to the art-game avant garde (Proteus) that scrupulously renders and unabashedly celebrates nature.

“It is a bit of a cultural reaction to the harsher themes that we typically see in games.”

“It is a bit of a cultural reaction to the harsher themes that we typically see in games: sci-fi and fantasy,” DeBonis says. “It is trying to tackle something that is unconventional and a little more difficult to approach.”

While Meriwether takes place in the great open spaces and silences of the American west, it is being developed in Brooklyn.  Though DeBonis sees the irony, he says imagining the wild from the city that never sleeps comes naturally. “That’s where I want to be; I love the West. Because of my love for the Lewis and Clark story, I love imagining that I’m there.”

Then again, maybe it’s not so ironic after all. It’s the borough, after all, that is now 75% made of canvas and rivets, where expedition-worthy beards grow like grass, where it’s a mark of sophistication to grow your own food, and where “artisanal” has become a redundancy. Call it the rise of Americana gaming.