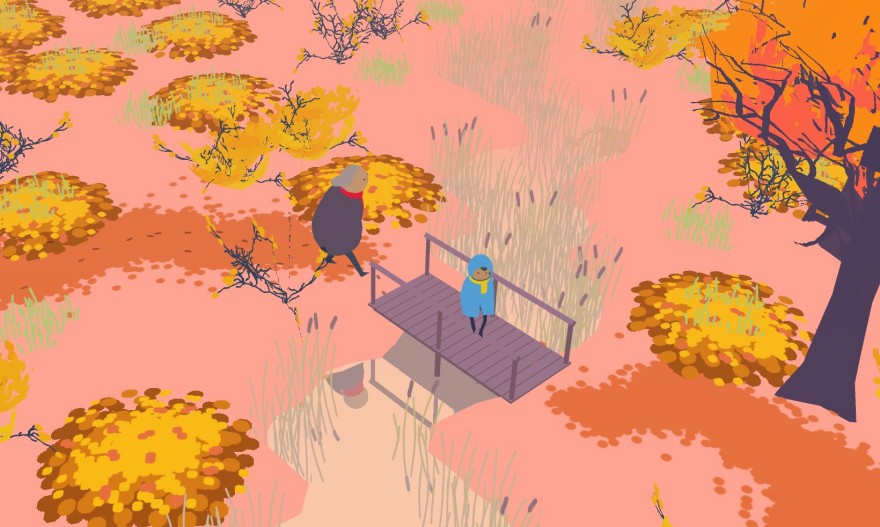 Dedicated to grandmas everywhere, Lieve Oma (translated from the Dutch as “Dear Grandma”) is a game that speaks to the way we come to associate places in the world with the loved ones we once shared them with. Creator Florian Veltman has now released it on itch.io after having spent the past few months arranging the trees and rivers of the game’s forest to his liking—an act that he previously told me felt akin to grafting a portrait of his own grandma. “Not because of the ‘autumnal sunset colours’, but because despite what it may evoke on the surface, everything still seems very vibrant, warm, and pleasant,” Veltman said.

Looking under the surface to find warmth, it turns out, is a major theme of Lieve Oma. In it, you play a young girl who goes mushroom picking in an autumn forest with her grandma. The pair talk as they step over the early morning brushwood, the grandma asking the questions and picking out nature’s terrific sights, while the girl seems uneasy as she answers mostly with ellipsis. There’s something going on in this little girl’s life, and it becomes apparent that the grandma has taken her away from it all, to this serene and rejuvenating forest, to help her talk through it.

How the grandma gets to the truthful feelings that her granddaughter is trying to bury is subtle—she isn’t forceful, but patient and gentle, showing utmost love and care in her conversation. The game follows the grandma’s example in its approach to getting its story across to you. While the dialog is the most obvious storytelling device, there are many more for the eye to tease out; it’s a game brimming with small gestures. Everything from the difference in the pair’s walking animations—the grandma hunched over and slow, the girl much more springy—to the font inside their speech bubbles seems to have something to tell you.

The use of the game’s camera is perhaps the most graceful of these storytelling tools. It starts out fixed just above the two characters, giving you a clear view of the forest surroundings in a way that encourages you to explore the path ahead, or to even leave the path and find mushrooms deeper among the trees. It seems to reflect not only the wanderlust of the granddaughter but her initial unwillingness to talk to her grandma—at this stage, she prefers to avoid answering the prying questions altogether, and so it seems fitting that she would want to run away from her grandma into the woods, alone. Later on, the camera subtly shifts to a higher, more distant perspective to give you an overhead view. From here, you cannot see what’s ahead so much, and so rather than explore you feel inclined to keep the girl closer to her grandma as she walks the dirt path through the denser parts of the forest. It seems like no great coincidence that it’s also during this section that the two start to break through the discomfort in their conversation and become emotionally and spiritually closer.

The walk through the forest with the grandma is broken up with scenes from the girl’s future (or, perhaps more accurately, her present), when she is old enough to drive. These wintry scenes, in which the girl walks alone through the same forest as she used to with her grandma, frames the autumn scenes as memories from the past—it’s as if she’s walking through the forest to make a physical connection back to that time, to remember it. At one point in the past, the grandma and the girl search for a blue heron they usually see stood in a river, but it’s not there. When revisiting this place with the older version of the girl, the blue heron is seen stood in the river, but the grandma isn’t there to acknowledge this. And so seeing it seems to take on a greater meaning, as if the young girl is carrying her grandma’s presence on in her absence; the sight of the blue heron acting as a metaphor for the connection they established in this forest years ago.

Lieve Oma is full of moments like these that evoke both sorrow for the times lost to the past and an appreciation that the connections made back then between the girl, the forest, and her grandmother happened at all.

You can purchase Lieve Oma over on itch.io.