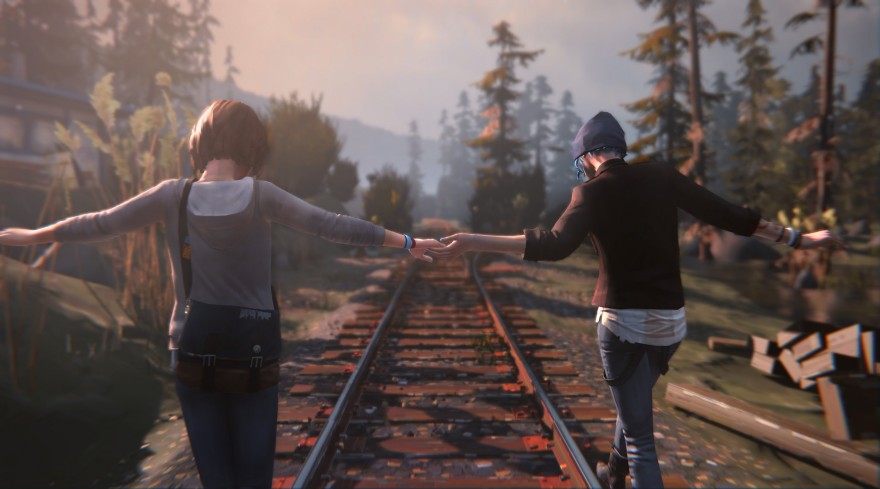 The second episode of Life Is Strange opens slowly. After a recap of the non-contingent events of the first episode and a written reminder that player actions “will impact the past, present and future,” a digital alarm quietly but insistently buzzes. A screen prompt on an otherwise black screen encourages the player to hit the snooze button.

The first thing the player does, the only thing she can do, is to give Max another minute or two before she has to get up and do anything.

The camera pans slowly across Max’s room in the soft early-morning light, showing us artifacts of Max’s effort to give herself a context for her newfound powers—H. G. Wells’ The Time Machine, notebooks and physics textbooks, Max’s laptop computer, with the tabs of the previous night’s searches still open behind the drifting aquamarine screensaver.

Eventually, Max herself comes into focus and thinks about opening her eyes. She’ll remain in a comfortable half-sleep until the player presses the button telling her to “get up.” The player might be tempted to delay for a minute or two. It’s early. Max had a hard day yesterday, and  can almost certainly expect another one today. But for now, the soundtrack is good, and the lighting is gorgeous. There’s no need to rush.

There’s a suggestion in this deliberate, almost languid opening sequence that maybe we’ve been going about this whole game thing all wrong. Maybe the timers and deadlines are overdone, and the constant press of wave upon wave of mortal peril has played itself out. Maybe even the open-world do-what-you-want walking/driving/skydiving simulators are just too, well, busy.

In places, Life Is Strange utilizes familiar gestures toward unhurriedness, allowing the player to direct Max quickly to the obvious and clearly designated story/action waypoints, or to meander instead, examining objects and pursuing optional conversations. The moments in the second episode that truly stand out, however, are the ones where the game allows Max to just sit down, and, after a bit of not-great but not-awful internal monologue, just be where she is, as long as she and the player want.

the videogame as a form in its own adolescence

This is what Life Is Strange really captures about late adolescence, at least as I think I remember it all these years later—the way that matters of what seem like life-and-death coexist with long stretches of absolutely nothing to do, and somehow neither is particularly preferable to the other.

In fairness, as the name of the episode might indicate, “Out of Time” struggles between its unhurried spaces and the necessity of being an episodic videogame with a story to advance and action set pieces to stage and execute. In “Out of Time,” Max twice faces situations in which another person’s life is placed in her hands. In one of those two, it is impossible for the person to die. No matter how long it takes the player to figure out how to extract Max’s friend from her somewhat random predicament, time reverses again and again, stopping absolutely at the point of crisis no matter how much strain the game tries to tell us Max has to endure.

In that particular infinitely extended moment, Max’s resources are limitless. By the time she has to try to save a second life, things are different. If the first life-and-death set piece retains a certain power even after the player realizes she is working with a net—there’s something primal, at least for me, in the mass and inevitability of an oncoming train—Max’s second attempted rescue is troublesome for a different set of reasons.

Suicide is an unavoidably sensitive subject, informed by and inflicting trauma, fraught not only with misunderstanding but the absolute exclusion of the possibility of understanding. There’s a hint of dramatic truth when Max’s powers fail just as she’s faced with a friend on the verge of ending her own life—and Max, like the rest of us, has to reach out knowing that failure is possible and that failure matters and that sometimes you can reach other people and sometimes you can’t and that sometimes none of this makes anyone feel any better, no matter the result.

But ultimately the scene fails. Describing exactly how is stymied by the fact that we don’t exactly have a word in games for what, in drama, we would talk about as the staging or the performance. In a game such an idea has to include not just the activity of the actors and producers but the player herself. It’s accurate but insufficient to complain that Life Is Strange doesn’t really do the work of establishing the girl Max tries to save as a character on her own rather than a signifier of the cruelty of Max’s environment and an opportunity for Max to set herself apart from that cruelty by showing compassion.

The greater failure, however, is that the manner in which Life Is Strange gamifies Max’s attempt to connect to another human being reduces a moment of fear, pain, and desperate vulnerability to a memory quiz.

And even if Max, in that sequence, cannot reverse time, the player still can by replaying the episode or loading a new save, making a dramatically functional limitation on gameplay mechanics feel unfortunately arbitrary. Hacking time is new for Max, but (at least when it comes to narrative games) some of us have been at it for quite some time.

It’s still easier to construct narrative contingency than to make it meaningful. Which is not to say that the climax of “Out of Time” should have been a cutscene so much as to acknowledge that reviled as they may be there’s a reason why so many games still rely on non-interactive scenes to convey their major storytelling beats. This is one of the reasons many of us still talk about the videogame as a form in its own adolescence. We haven’t figured out all the tools just yet. It’s okay. There’s still time.