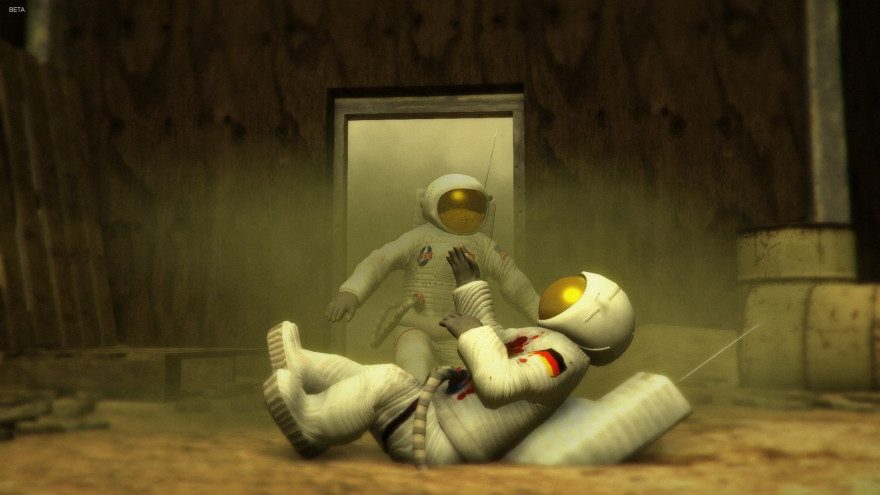 The first half-hour of Lifeless Planet is pregnant with unnerving possibility. Our hero (let’s call him Jack, because the game never names him) has awoken alone on the surface of an alien world. His capsule has crashed, his crew is nowhere to be found, and the barren, desolate landscape doesn’t seem to be anything like the lush garden world he’d been briefed to expect.

Exploring the area around Jack’s crashed space capsule, we see things that don’t readily make sense given our location 20 light-years from Earth: a leather-bound book half-buried in the dust, then a neat line of decidedly Earth-style telephone poles strung with wire. Eventually we come to a small town of clapboard and brick, empty of life but still animated by the wind: buildings creak and the settlement’s tattered Soviet flag flaps. The planet seems haunted by ghosts from Earth’s past but then so, apparently, is Jack.

The human artifacts on this alien world are strange enough, but in addition to the tangible village, Jack is seeing things that may or may not be there. In a cave, a hospital bed appears and then vanishes. He seems to see one of his crewmates for moment, but then the astronaut appears to be sucked into the ground. “I think my mind is playing tricks on me,” our hero observes.

This first half-hour is Lifeless Planet‘s apex. The game world exists in a David Lynchian possibility space where we can’t be sure what’s real and what’s surreal. The first thing that we hear Jack muttering to himself is that he’s pretty sure the spaceship crash has given him a concussion, and not long after that we’re presented with a voiceover of one of Jack’s memories (apparently from a pre-mission media interview) where he mentions the disappearance of his wife.

Just how damaged is Jack, physically and emotionally? Are these visions the delusions of a traumatized mind? Did Jack die in the crash and we’re now running with him through the tortured Elysian fields of a broken-hearted astronaut? What is the connection between this increasingly hostile world and his wife back on Earth? You spend a good deal of time in this opening act just walking in silence, which gives you time to engross yourself in what may be. Will there be a Planet of the Apes-style twist as to where we actually are? Perhaps, as in The Martian Chronicles, this is all just an illusion.

Sadly, it’s all much more straightforward than that. The titular Lifeless Planet isn’t as lifeless as advertised, of course, but its secrets purl together into a threadbare sci-fi yarn, told largely through dull written log entries scattered along its linear levels. The game’s lore is reasonably imaginative, but the story doesn’t have the knock-out “wow” factor that Lifeless Planet seems to think it does—you’ve heard most of these story beats before, and told more elegantly, too. Creator David Board mistakes spareness with subtlety, and at the end of the game we’re left with a mostly unconnected handful of vague notions about unethical science, the Gaia hypothesis, and Jack’s wife back on Earth. Lifeless Planet wants to be a story-driven adventure, but its plot doesn’t resolve into any kind of coherent or compelling narrative.

Good platforming requires a Rain Man-like obsession with perfection and Lifeless Planet doesn’t have that. The controls are imprecise and—infuriatingly—it is entirely possible to cross a checkpoint threshold with your corpse, as our man Jack is a bit delicate when it comes to falling damage. By the fifth (or twentieth) time you trudge back to the beginning of an obstacle course you’ve failed to start all over again, I can promise that you won’t be lost in contemplation of the mystery of the Lifeless Planet—just cursing and doing your best not to fling your keyboard out a window. It’s difficult to imagine a gameplay genre less suited for telling an immersive story than 3rd-person platforming.

Jack has a jetpack on his spacesuit, and Lifeless Planet attempts to mix up the platforming by occasionally boosting its power. When the plot decides it’s necessary, the jetpack goes from a double-jump to a powerful flight-enabler, and it’s these segments that provide the biggest of Lifeless Planet‘s modest thrills. But when you’ve finished the section that requires it, the game duly informs you that the jetpack has run out of fuel. Designated fun time is over.

The game’s environments have the appearance of a 3D sandbox but you quickly discover how linear they are. From time to time you’ll find a dead-end path with a gameplay-irrelevant collectible doodad perched at the end of it, but the environments offer little of interest outside of the straight-line path to the next platforming segment. Even if exploring the mostly-sterile environments was compelling, the game introduces angry alien flora about a third of the way into the game, which spring out of the earth and impale you upon their branches. The biggest result of their introduction is a chilling effect on your desire to explore beyond the monster-free Yellow Brick Road, making the Lifeless Planet feel even more restrictive.

It’s a place that deserves a more compelling reason for you to visit.

The great pity is that Lifeless Planet is not entirely without merit—Board has a good eye and ear for aesthetics. He’ll make you trudge through a Mars-like landscape for five minutes and then have you turn a corner to find a 1970s-era Brutalist Soviet apartment block. Board loves this Duchamp readymade approach to level decoration, where mundane objects become striking by being dropped into an alien context. The Rich Douglas-composed soundtrack is majestic and mysterious, and Board uses it sparingly to preserve its power to move you. It is genuinely impressive to arrive at a Lifeless Planet vista, received by a stirring musical crescendo. It’s a place that deserves a more compelling reason for you to visit it.