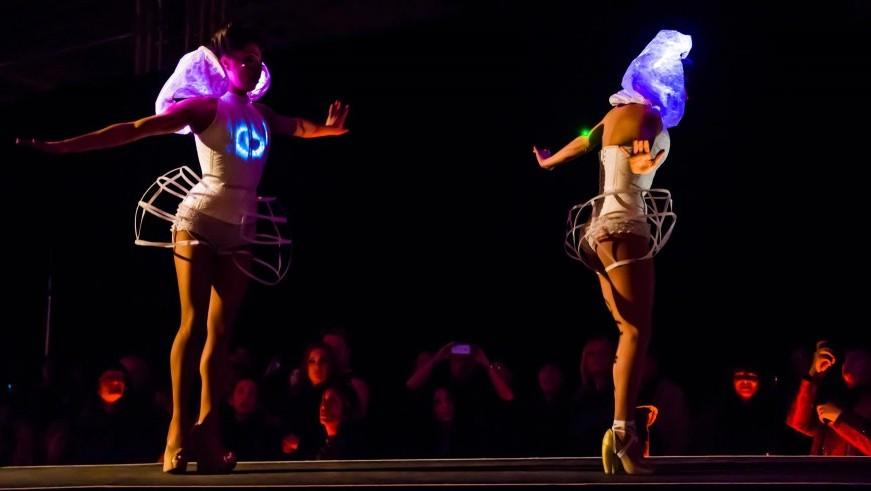 There is quite the scene wherever Heart Sync is shown. One part haute couture, one part futurist freakout, the world of biometric fashion is indeed a strange one, and you could easily confuse a public showing for something out of a Fellini film. A procession of contortionists, chiseled hunks built like Roman athletes, and circus performers pose with the latest smart linens and digitalized brassieres.

At the Woman 2.0 Conference in Las Vegas, November 14th and 15th, where the high-tech bustier will appear next, it will be accompanied by a curious jacket for DJs that plays Midi samples as you move around, and a dress with bustle and train that’s covered with racist comments collected from the internet. Heart Sync is a striking garment, a lace-up nightie with a ruffled hood and a chameleonic glow. It’s also very revealing. The otherworldly corset not only flashes bare skin and butt cheeks, but its wearer’s emotional state. These sexy spacesuits are an initial step towards transforming body readouts from impartial data into a full spectrum of feelings, literally allowing you to wear your heart on your sleeve.

“It might be the root of empathy—feeling how another person feels,” says Kristin Neidlinger, the ballet, samba, and modern dancer turned techie fashion-designer. With Heart Sync, Neidlinger envisioned two hearts beating as one through biometric clothing. The way it works, she explains, is that each top is wired with a sensor that monitors your heart rate. These IR sensors read the oxygenation in the blood, representing that data with a motley of colored lights. Feel calm and the hoodie fades a bluish-green. If your heart is racing, it glows bright red. The color-coded readouts approximate high anxiety and tranquil mental states.

The objective is to match colors by syncing the rhythms of two hearts.

More than a modern mood ring, Heart Sync is also a game for two or more players, each laced up in their very own corset. At shows, Neidlinger relies on a duo of sinewy trapeze artists to demo the game in public. One, because they look good in costume. And, two, because they have exceptional control over their bodies, a talent necessary for demoing the game. The objective is to match colors by syncing the rhythms of two hearts. “When they synchronize, we’ve added a red and white swirl, which means you’ve won,” she tells me. “When that happens I jump up and down!” While often aloof, her motivations are sincere. “I just thought it would help people listen to themselves and to others more,” she says.

How do people act when they don a Heart Sync vest? They generally try to mirror one another, moving at the same pace. They listen more. Neidlinger describes it as a sensitivity training exercise for the emotionally-impaired. “When I first started designing wearable computing, I thought of it like a new kind of gym. Instead of going to the fitness gym, you’d go to the senses gym and tune up your senses,” she says. “It’s kinda like doing your pushups, but an exercise to make people more sensitive and empathetic.” She tells me how entire groups will work together until all their hearts beat in union. She hopes more people can try it, dreaming of it being played at large house parties, raves, and a theme restaurant in Vegas. “This could end war!” she says.

“I’m trying to get people to elevate their consciousness.”

It’s unimportant that the theories Heart Sync is based on are pure pseudoscience. (Although there are studies that show the heart is an electromagnetic communicator; or that two hearts can speak to each other over beams of radiation when in close proximity.) Neidlinger’s part is artist and spirit guide. “I’m trying to get people to elevate their consciousness. It’s almost, like, psychic. They can read each others bodies,” she says. Of course, some of her projects are more practical than others. She went to grad school to make ergonomic chairs, but created the “slouch screamer” instead, a sensor that beeps when you slump at your desk. That said, Heart Sync isn’t totally outside of practicality. A medical doctor is considering using it in group therapy sessions for stress. Leave it to science to sort out the rest.

That seems to be the mantra for the majority of computational fashion. While Nike’s Fuelband measures everyday migrations, and the iPhone 5s is locked with a fingerprint, the thing about e-textiles is that no one has figured out exactly how adding biometric sensors to a pair of pants will catapult society just yet. Thus, Heart Sync is nestled in between several tangential professional fields. “It’s not quite fashion,” she says. The runway presents problems, because the suits takes too much explanation to be shown in one pass. “They’d just be like, Ooh lights!” she adds. It’s not quite a wearable gadget, either. It’s therapeutic, so it’s almost medical. It qualifies as a game by the skin of its teeth. It has similarities to meditation and yoga. She shows it at tech conferences. It’s irrational, just like the heart.

The corsets were made by Dark Garden Unique Corsetry.