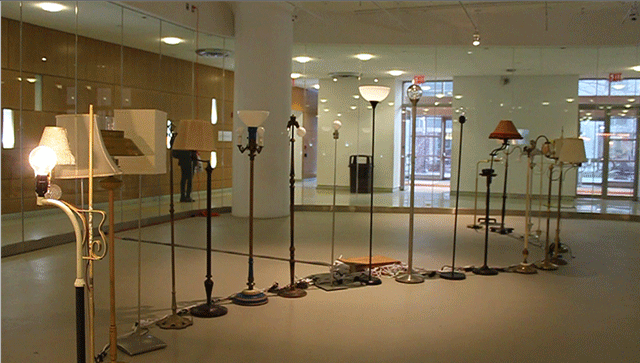 Joe McKay is an artist who is interested in exploring and breaking the artificial barriers between “art games”, and “art that comments on games” – and he wants to bring fun and meaning to both of those worlds. His latest playable installation, Light Wave, is currently on display in Long Island University’s Brooklyn campus gallery, beckoning potential players with its array of flashing lights (bright and shiny things tend to draw attention in a gallery space), and the unusual interface – players interact by hitting a soft mallet onto a button.

As a game, it’s a simple concept; really a stripped-down rhythm game that has players hitting the mallet in time to make a row of variously adorned lamplights run smoothly. It’s a little like those boss fights in Ocarina of Time that had you swing your sword to volley a beam of energy back at Gannon, only your only opponent here is your possible lack of rhythm and a row of hostile lightbulbs.

“In the game world, if a game is “artistic” that is usually code for a game with an independent developer (or at least a small team) and the game has a strong visual aesthetic. It does not mean that the game is in conversation with the art world in any way.” He says.

But the art world isn’t immune to similar criticism from McKay, in its continual sacrifice of gameplay for aesthetic value and/or artistic vision. He finds as much fault in this as in vapid or disconnected “art games”.

“In art, games are often used as a device to open a dialogue or critique and games are used as cultural references”, he says, “but it is rare that an art game is actually fun and addictive to play as a game. There are exceptions of course, but this is mostly true.”

Given this, McKay is interested in making art fun to play with: “…One of my goals as an artist is to create games that the art viewer / player can fully lose themselves into and forget, momentarily, the rules that usually govern looking at art.” He certainly has his mind in the right place if he wants Light Wave to appeal to everyone’s inner gamer, given the mallet interface and quick-and-easy gameplay.

If you should find yourself in Brooklyn, and you’re interested in experiencing Light Wave, McKay suggests a few practice sessions with Rock Band first. “You would think from watching the game that tennis (or Pong) skills would help, but in reality I’ve found those with rhythm game experience (Rock Band, Dance Dance Revolution) usually win.”

It’s fascinating work, and McKay brings up good points about the disconnection between the art-game scene and the larger art world. Much of it stems from the relative obscurity of “art games” in the broader cultural context (Joe gamer probably isn’t aware of, say The Graveyard), lending to a bubble effect. Anyone who works to break down barriers – no matter how artificial they are on the surface – deserves praise. Image via Joe McKay Studio