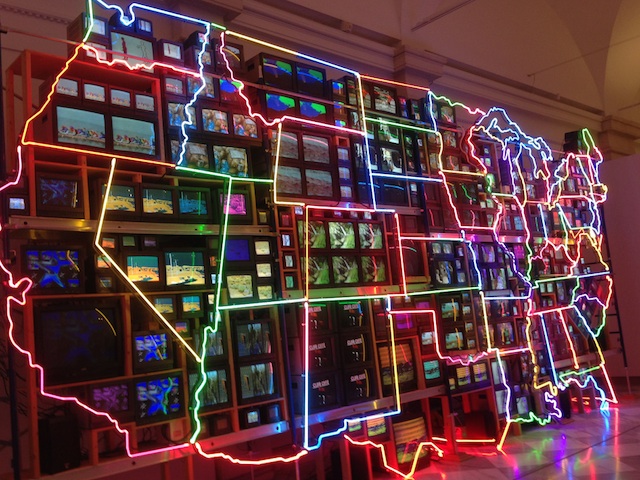 If the rest of Kentucky Route Zero turns out to be anything like the first chapter, the game will go down as a dark, strange, slick, mature, artistic, and mysterious venture unlike any other. My theory is that’s because while most adventure game designers pull from older adventure game designers for their sphere of influence, the guys at Cardboard Computer are inspired by all sorts of stuff, which include, but are not limited to: Tennessee Williams, the fiscal cliff, magic realism, stage design of the 40s and 50s, Sunn 0))).

And that’s just the half of it.

The two-man studio has released what they are calling a companion piece to Kentucky Route Zero. It’s called Limits & Demonstrations, a short game where the player ambulates around a darkened museum with two male characters and scopes out virtual art installations, mostly based on inspirations for the game. The idea grew out of the necessity for a demo, so potential customers could test out if the game was compatible with their system. But it soon turned into a virtual museum filled with strange artifacts.

One construction you come across is a revolving coil that makes a noise like riffling paper, based on the poem “The Policeman’s Beard is Half-Constructed,” which was debatably authored by a computer program named Racter. Another is an arrangement of “a middle-aged man with a cane, a nobly-posed horse, and one strange mesh of wires arranged to look like the sun.” This is a puzzle that was cut from the game.

The most curious virtual artwork found here, however, has got to be “Overdubbed Nam June Paik installation, in the style of Edward Packer,” which is based on a 1963 work called Random Access by Nam June Paik, the installation artist known for building robots from disused TVs. The way the piece worked in real life is that crisscrossing magnetic audio tape was arranged in an abstract pattern on the wall, and then the participants would run mechanical equipment over the tape to hear what was recorded on it. When you interact with the game’s version, it makes mechanical drones.

There are a couple of other sculptures and installations to be admired in the gallery, but that’s about it. Honestly, it isn’t much of a game. You just tick through the branching dialog and have pseudo-conversations. But when this demo is taken into consideration alongside Kentucky Route Zero, which I personally found riveting, it makes a strong statement: Games are at their best when they pull from an array of references for artistic inspiration–not just other games.