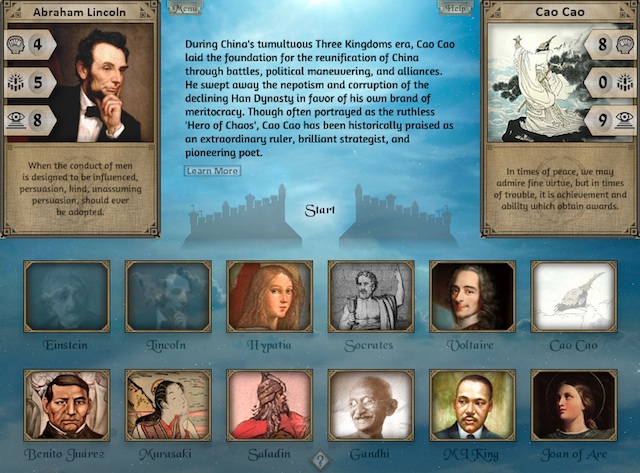 Lincoln had an austere and rigorous way with words. The Gettysburg Address is memorable not only for the message but for its gritty elocution. Still, there was a smidgen of down-home earthiness to Lincoln’s speeches, as you can hear in a line like “a drop of honey catches more flies than a gallon of gall.”

That’s why in Eternal Duel of Wits, a strategical card game on PC featuring history’s greatest public speakers and persuasive minds, Lincoln has a Charisma stat of 5 and a Guile stat of 8. His adversary Einstein has an Intelligence stat of 9, but far less Guile than him. Murasaki, the ancient Japanese novelist and lady of rank, is a more well-rounded character. As for Socrates, one of philosophy’s shrewdest rhetoricians, well, there was an argument over his skill set. You see, one of the game’s two creators has the impression that Socrates wasn’t a very bright guy.

“He wanted to give Socrates like a 1 Intelligence,” the other rebutted with a grin.

Multiplayer is like Street Fighter with cards and famous orators.

The spat was between two lifelong compadres from Hot Springs, Arkansas who met in the second grade, when one of them broke his leg and, being on crutches, had to sit in the back row, where the other was assigned to sit. The rest was history. The one with the leg, Allen Tucker, is now thirty, but looks much younger than his age. He had a black cat in his lap when we talked on webcam. His teammate W. Matt Dodd, who is employed stocking a Star Wars toy store, was seated beside him, wearing a black beard, black glasses, and black t-shirt they had printed up for the game. The shirt looked like something from Actual Pain, minus the pentagrams, plus a yin-yang.

In the game, the yin-yang, which can wreck the value of a perfectly good card, is one of many possible things to be wary of that you won’t find in a real debate. Actually, there’s not much debating going on. Eternal Duel of Wits is more of a numbers game that involves bluffing, match-three, and roshambo. What makes it an outstanding card game is that you can play it on automatic, the same way you play computer solitaire or Texas hold’em without even thinking about it, but the rules are complex enough that they consistently overlap in enlightening patterns. It also helps that multiplayer is like Street Fighter with cards and famous orators.

The duo had huge ambitions for this, their first game, but had to scale them back, and even then, the work they thought would take four months wound up taking eighteen. Some historical figures had to be axed. H. L. Mencken and John Stuart Mill didn’t fit because the guys didn’t want to overrepresent 19th century Western thought. Karl Marx was considered too influential in national politics. And they also avoided figures that could be vilified. “We believe that you can have engaging conflict in a game without it having to be about violence,” Matt said, “and debate is a perfect example.”