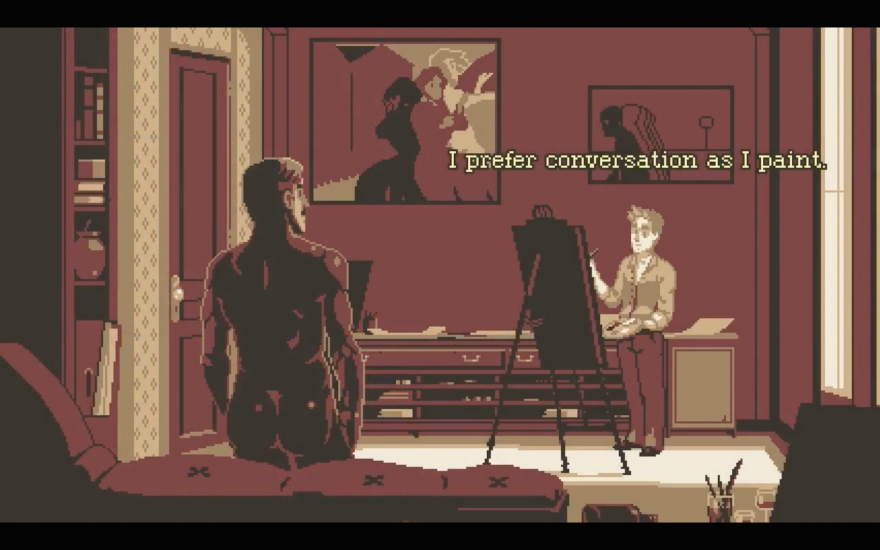 Episode one of The Lion’s Song, titled “Silence,” focused on the timid composer Wilma’s struggle to overcome creative block while secluded in a cabin in the Alps. The forthcoming second episode, “Anthology,” moves on from Wilma’s story, but it won’t leave her behind.

Anthology switches protagonists to follow Franz Markert, a painter back in Vienna who can see different “layers” of his subject’s personalities. A brief trailer shows him making cheerful conversation with one of his subjects, inquiring about his childhood as a ghostly figure appears by him, presumably one of the “layers” that Franz is channeling. Earlier, a snippet of Wilma from episode one shows her musing on her past history with Franz, who painted her in Vienna before she took her sabbatical to the mountains.

playing with the idea of that going in reverse

The Lion’s Song’s origin as a Ludum Dare jam game originally hinted that it would focus on the connections between people—the jam’s theme was “Connected Worlds”—and episode one provided that with Wilma’s impromptu telephone conversations with a Czech man named Leos. Now, the introduction of Franz presents the opportunity for many more of these connections, especially considering his prominent place in the artistic salons of early 20th-century Austria. That way, he can be tied back to Wilma and forward to (presumably) Emma, the third artist who will play a role in The Lion’s Song’s last two episodes.


But conversation isn’t the only way to connect the protagonists. Along with the traditional method of your episode one choices altering your episode two choices, The Lion’s Song is also playing with the idea of that going in reverse: what you paint as Franz may appear on the walls of the cabin that Wilma exiles herself to in episode one. Whether this is included in episode two as a kind of flashback, or whether it’s necessary to properly go back to episode one and see the art you’ve put up on the walls, isn’t known. Perhaps Franz’s recollections of his time with Wilma will influence her own musings to the same extent.

Luckily, The Lion’s Song’s first episode is currently up on Steam for free, so you can look for pictures in the background that may later be home to Franz’s masterpieces as you wait for the release of the second episode. Brief footage from Gamescom last week shows that it keeps the strong visuals of episode one’s sepia tone, although the environment of Franz’s urban apartment is much different than Wilma’s alpine view. We’ll be able to explore their connection later this year.

You can find out more about The Lion’s Song over on its website.