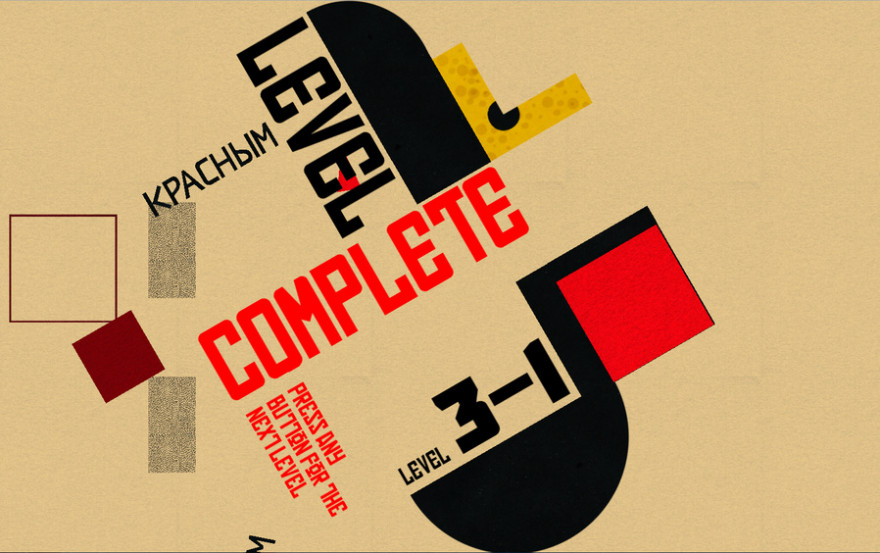 When Russian artist El Lissitzky printed his 1920 Soviet propaganda poster “Beat the Whites with the Red Wedge,” he had no idea it would become iconic. It was its bold symbolism that did the trick. The Russian civil war was reduced to a potent display of shape and space. The Bolsheviks were represented by a violent-red triangle that had stabbed the softer, pale circle of the anti-communist White movement. It was easily overlooked in Russia itself, but western media utilized the poster as a symbol of Russia’s inner struggle, finding its simplicity and blunt imagery an effective educational tool.

More recently, that same poster of Lissitzky’s and its Suprematist form—the Russian abstract art movement it belongs to—have been re-purposed once again. This time it has been adapted into a videogame. No, really: you play as the red wedge and must recreate its violent assault on the white circle to complete each level. So, not only is it thematically identical, it also retains the look of Lissitzky’s poster due to having been produced with paper cut-outs arranged in the same Suprematist style.

The game is called Lissitzky’s Revenge on account of it being based on the artist’s work, as well as being an adaptation of the 1982 arcade game Yars’ Revenge. It starts with you having to keep the triangle within cross-hatched pieces of material that move across the screen in order to charge enough energy for a dash that will destroy the circle. During this, the circle fires Russian words at your triangle in an attempt to keep you back. In more challenging levels, you first need to reveal the position of the circle by transporting squares to its position, while simultaneously safeguarding the squares from their various vulnerabilities.

At its surface, Lissitzky’s Revenge is yet another action arcade game with a compelling conceit. But if you’re aware of the context behind its imagery, and what the shapes represent, it has a deeper meaning. And this isn’t a repeated case of how people have forced an interpretation of Tetris over the years, it apparently being representative of communist ideals—a game in which you try to fit irregular shapes into patterns that cuts them into equal parts of a singular mass. No, Lissitzky’s Revenge is overtly political from the ground up.

However, the purpose of its creators isn’t to update the 1920 Soviet propaganda it takes as its source for today’s population. In fact, they state what their intention is quite clearly on the game’s page: “The purpose of this project is to explore new art production techniques using real-world artist materials to determine the viability of such methods in common game production.”

Lissitzky’s Revenge is part of a wider ambition called the Atelier Game project, which takes its name from the “atelier” learning method by which an apprentice studies fine art under a master artist. The relevance of this name is another part of what is actually the project’s three main goals. The first we’ve already covered. The second objective is to encourage those creators to get involved in videogame production who wouldn’t usually, and without having to use traditional skills or even the tools that are typically associated with it.

a political cartoon game made with pen and ink

The question is: if adapting the art work of 20th century artists, making it digital and interactive, is enough to make a videogame (as the Atelier Game project hopes to prove), will talents from other creative fields be more inclined to experiment with the medium? The answer is unknown right now but it will hopefully be a yes. To this end, the Atelier Game project will continue to make games in the style of Lissitzky’s Revenge. The next one is already underway, in fact, it being a political cartoon game made with pen and ink, and that should be out this May.

Once all the games are finished, the plan is to then exhibit them alongside the original media they have been adapted from, so as to further push that second goal. And even if the first and second aims of the project are undetermined in their success, the third one has already been achieved. That being to “create unique art-based games.”

You can play or download Lissitzky’s Revenge for free on Game Jolt. More about the Atelier Game project can be found out here.