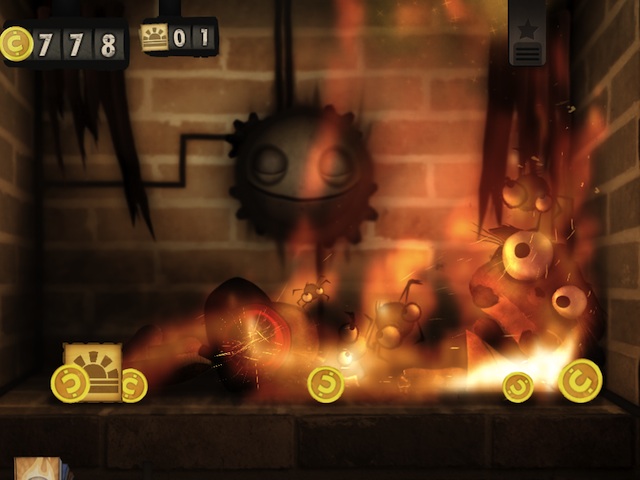 The undisputedly deranged virtual fireplace simulator Little Inferno made its iPad debut a few weeks ago, and since then I’ve set to flame a corncob, letter blocks, a toy pirate with a hook for an arm, a photo of me taken from my iPad’s camera, an analog TV, a floppy disk, a Russian nesting doll, a cello, dish detergent, a grande cup of coffee, a deadly juicer, locust eggs, fashionable sunglasses, and about a hundred more inappropriate things.

We talked to its creators Kyle Gabler (of World of Goo), Kyle Gray (of Henry Hatsworth), and Allan Blomquist (of an unspecified NES emulator) about what it all means and their unhealthy fascination with burning things.

Kill Screen: How did you come up with the idea for a game about burning things in a fireplace?

Kyle Gabler: We loved the idea of creating something that appears to be a silly casual game on the surface–but that gradually becomes a little self aware, maybe a little terrifying, and keeps going. A fireplace simulator seemed like a good, suspiciously simple, cover. It allowed us to forcefully constrain the player’s view, so they can’t look away.

And from that limited perspective, we could dribble in bits of a huge and wonderful and scary world that’s always just out of reach. You can’t look away from the fireplace, even if you wanted to. Strict constraints seem to open up tons of possibilities!

What are you guys favorite fire-fodder from the game?

Allan Blomquist: My wife and my one year old son demand to see Kitty Kitty Poo Poo at every opportunity.

Kyle G.: The Singing Valkyrie. She breaks hearts and champagne glasses! And listeners might recognize her song from World of Goo.

Kyle Gray: I enjoy the screaming food items – they start off benign, but go horribly wrong.

So are you guys pyromaniacs?

Kyle G.: When the N.F.P.A.’s Sparky the Fire Dog cartoon mascot began calling for our removal from Nintendo’s eShop, I think we all had a moment where we stood back and thought “Huh. This game really probably looks like it’s about fire, doesn’t it!” Weirdly, when I think about Little Inferno, and what we were trying to do with it, playing with fire is not even close to the top!

Little Inferno seems to be making a subtle critique of casual games. Was that your intention?

Kyle G.: Especially now that we’ve released on iOS, we’re hearing a lot of the “satire of social games” angle – and some friendly poking at other games is absolutely there in Little Inferno, but it’s not really the payload. Everyone knows social and casual games can be a little terrible, so making a whole game about that would be unnecessary! The familiar casual stuff is a part of Little Inferno in the same way generic 2D platforming was a part of Braid – as a delivery mechanism for something else. There’s a simpler, hopefully more heart-warming, overall message!