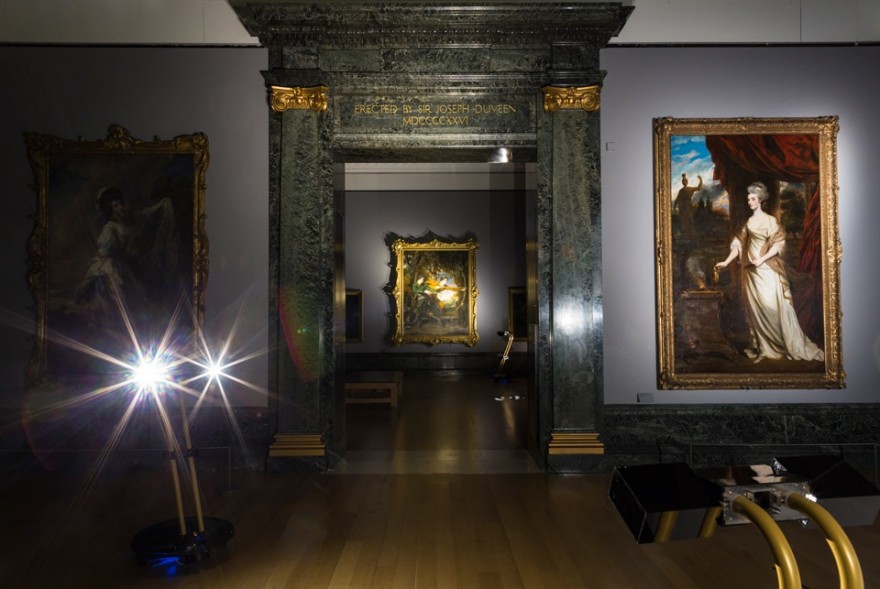 There’s an inherently naughty feeling to being somewhere after hours. No matter the place—a cafe, amusement park, or museum—the emptiness that replaces the hustle and bustle of the day just feels… wrong. In the best way. It’s like being in on a secret that the other plebes who visit during the day aren’t in on. Dark hallways and pin-drop silences somehow manage to feel, in this instance, like an exclusive party only you were invited to.

But, as of last night, everyone’s invited to join the exclusive after dark party happening at one of London’s most historical art museums, the Tate Britain. A slew of live-streaming events are taking place now through August 17th, which utilize telepresence robots in order to allow people around the world to explore all the dark corners of the museum’s galleries. The Workers, the digital design studio behind After Dark and winners of Tate’s IK Prize, hope this experience will form an intimate relationship between the participants and the museum.

Tate Britain holds over 500 years of British art. Though the galleries include contemporary work as well, the melding between 1500 paintings and robots created through space exploration technology should be an interesting clash. All four of these sophisticated robots were created in partnership with RAL Space, to navigate the galleries through on-screen buttons or the arrow keys on users’ keyboards. They’re directionally flexible, able to move forward, turn, as well as look up or down. And for those of you fretting over any trolls logging on in the hopes of knocking over priceless sculptures, these robots are smart enough to sense obstacles in their way and avoid them. Of course, deciding who gets to take control of the robots couldn’t be the chaos of the system Twitch Plays Pokemon uses. So instead, a request form function has been added that, when filled out, adds hopeful navigators to a randomized queue.

The teasers and videos of After Dark definitely play with the sense of doing something forbidden, the spotlight from the robot’s camera providing a cat burglar vibe. Co-creator Tommaso Lanza wanted to provide users with a “different angle and different light, both figuratively and literally,” for viewing these landmark artworks. Ross Cairns also believes that another aspect of After Dark’s distinctiveness is that a visitor could be in a “completely different time zone—you could be waking up in the morning yet exploring the space at night.”

Even if some of you have been naughty enough to wind up in a museum after hours IRL, the collective part of this live streaming broadcast adds another unique layer. Discussion should be lively, seeing as this will be the first time thousands of people around the world visit an art gallery together. Is there an emoticon for chin-stroking?

You can catch the next streaming event here, from 5pm-10pm tonight.