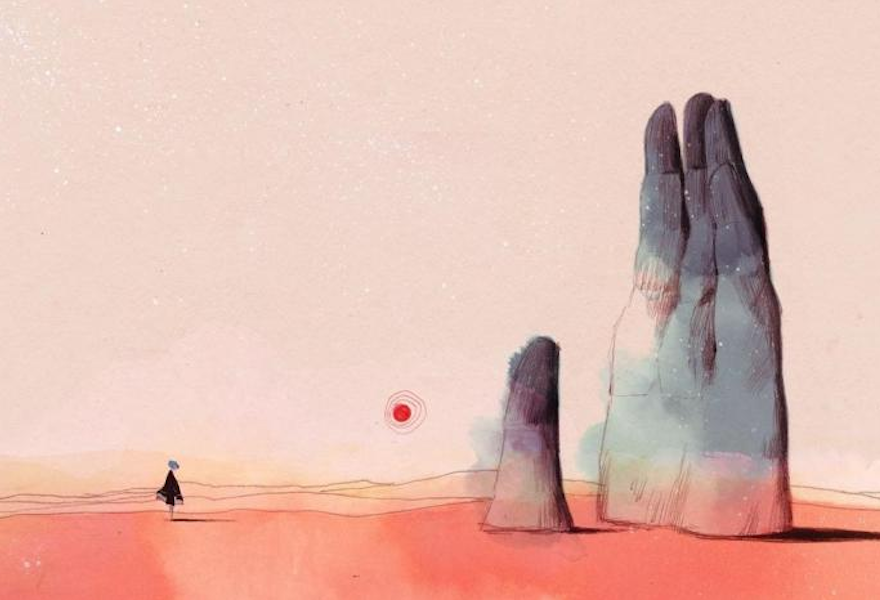 As of right now, there’s not a lot of information about Gris. We know it’s a 2D game. We know it has “zones.” We know it stars a woman clad in a flowing cloak reminiscent of the main character in Journey (2012). We know it takes place in a surreal environment largely dominated by a Mars-like red, and we know it’s being worked on by a team from both Barcelona and Tokyo. More than anything, though, we know it’s beautiful as all get out.

We know this because what has been revealed about the game, mostly through its social media accounts on Twitter and Instagram, has largely oriented around its detailed artwork from Barcelona-based illustrator Conrad Roset. Among it are mountains made of hands, butterflies made of triangles, trees made of squares, and temples that combine various other geometric shapes to make uncanny ruins. All of this works together to convey a type of whimsy one might find in fairy tale films like The Secret of Kells (2009) or The Last Unicorn (1982), but perhaps more impressive is the game’s main character.

A woman with a confident bob and an elegant stroll, she is the dominant presence in the short snippets of footage that have been released from the game so far. Her fluidity of animation rivals that seen in the upcoming Cuphead, and her poses and self-assured expressions evoke the type of feminine power found in the best fashion drawings. It’s no surprise, either: Conrad got his start in the professional art world working for fashion megahouse Zara. “I search the beauty the body exudes,” he writes on his site. “I like drawing the female figure.”

Looking through the work on his site, it largely consists of a series of what he calls “muses,” paintings of women who are similarly arresting to Gris‘s lead. Avoiding the pitfalls of other art in the same style, especially that which attempts to highlight “the female form,” Conrad’s muses represent a variety of body types, emotional states, methods of expression, and fashion senses, and carry themselves with a certainty that does not seek to titillate as much as communicate. In other words, we are there for them, and not the other way around.

Most recently, Gris released its most extensive bit of footage yet, with a swelling piano score and a desolate environment. It’s still not much to go on, but when viewed alongside an earlier preview of the developers playing the game, wherein they glide in the air and follow a trail of leaves to their destination, the Journey comparisons appear to become stronger. However, while Journey‘s lead was always hidden under a hood, Gris‘s protagonist is not afraid to let her visage be seen.

This all makes for an impressive take that not only brings the bold design of Journey to players who never had a PS3, but also furthers the style by adding its own geometric and haute couture flourishes. While a release date for the game is not yet available, its worth it to follow its Instagram, which even when separated from the context of the game, stands on its own as just a stellar collection of artwork. Now if you’ll excuse me, I have some desktop wallpapers to change.