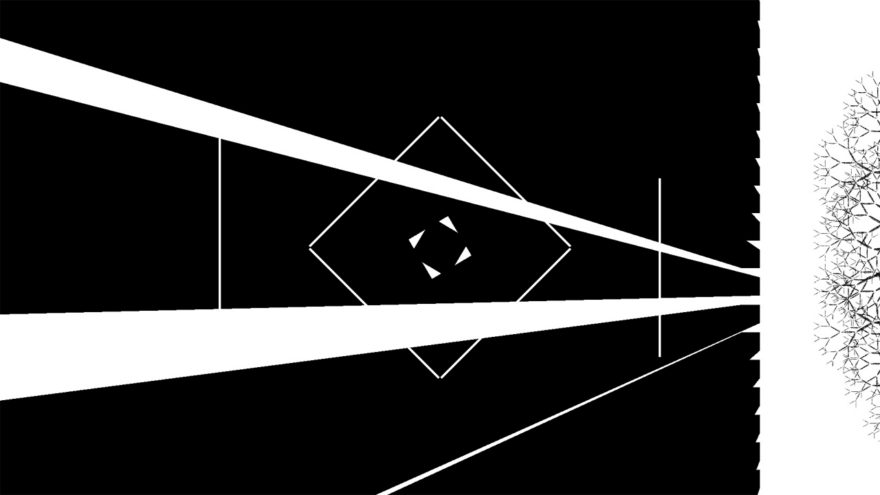 Hessamoddin Sharifpour’s upcoming game Lone Light draws its puzzles from the timeless dance between light and shadow, telling the story of a lone light finding its way through the cosmos. Sharifpour is an Iranian programmer living in Toronto; come September, he’ll be attending the University of Toronto to study computer science. At 19, he is already the recipient of two awards—Best Idea and Jury’s Special Choice—from the 2014 Iranian Indie Game Developers Festival, as well as nominations for Best Indie Game of the Year and Best Design.

there will also be hints of evolving cosmologies

This early recognition for his hastily made 2013 prototype encouraged Sharifpour to pursue the idea further, though he decided to gain more experience by first working on a handful of smaller games over the last couple years. “I actually came up with the initial concept when I was 16,” says Sharifpour. “I was playing around with the Construct Classic engine, and came up with the idea when trying out the program’s light tools.” He finished the prototype in just two weeks and then uploaded it to Game Jolt. His original build of the game was “poorly designed” and “really difficult,” however—the result of an experiment that merely gestured toward the essence of the project.

A month ago, Sharifpour submitted a more purposeful, more sophisticated version of the game to Steam Greenlight, where it was greenlit within the first 12 days. At the moment, he’s raising funds on Indiegogo to help pay for audio design and publishing costs, with the aim of releasing Lone Light on Steam and Xbox One in late summer.

The game’s shadow-play focus, Sharifpour says, was inspired by some mixture of world philosophy and the kinds of intricate, puzzle-driven games that drove him to learn programming and game design in the first place: titles like World of Goo (2008), Machinarium (2009), and Braid (2008). Compared with his initial prototype, he intends to provide a more accessible experience by gradually teaching the player to find the light source using the surrounding shadows. But, in the course of the game’s level progression, he says, there will also be hints of evolving cosmologies, and various notions about light and dark from throughout the history of astronomy.

With a month to reach its funding goal on Indiegogo, Lone Light is slated for release on Steam and Xbox later this year.