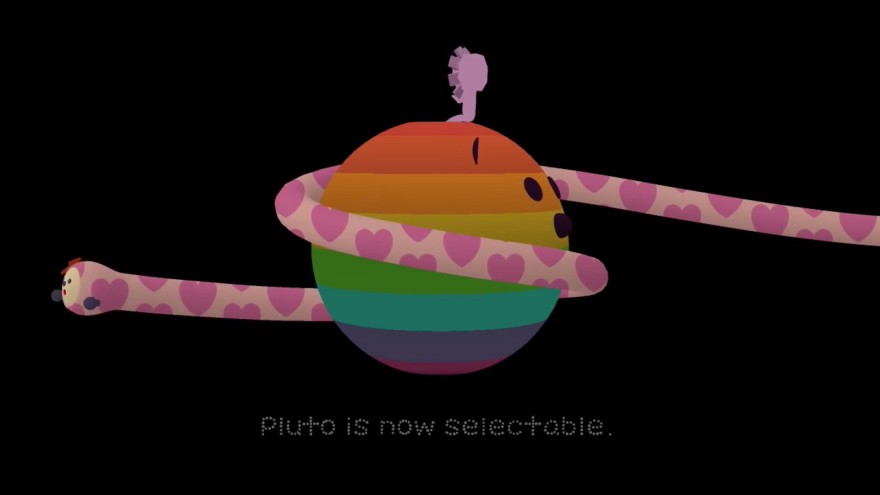 It’s been a rough ride for Pluto ever since it was demoted in 2006 by the no-good scientists who deemed it unworthy of the proper “planet” classification. It lost its confidence, became altogether uninterested in life, and has been revolving in its own sorrow ever since. After the demotion, all of Pluto’s accomplishments were diminished by the “dwarf” planet prefix. No matter what it did—whether completing an orbit around the sun or being visited by a spacecraft—big brother Neptune and his ilk would always outshine him (you know, since they’re closer to the sun).

Fear no more the heat of the sun, Pluto

But fear no more the heat of the sun, Pluto, for you need not suffer through life alone anymore. Noby Noby Boy, the delightful little sandbox game by Katamari Damacy creator Keita Takahashi released back in 2o09, is about exploring planets and stretching across the solar system. Here’s how it works: players control a worm-like character known as Noby Noby Boy, raking up points based on how far they can stretch his body while exploring the environment. Every player’s score is then added up and transferred over to Noby Noby Girl, as she makes her solitary journey to the end of the solar system and back.

From last we heard back on March 6, 2014, Noby Noby Girl had finally reached the blue beauty Neptune. Yesterday, six years after the game’s initial release, she arrived at the very edge of our solar system. As evidenced by the video capturing the momentous occasion, Pluto looked frankly shocked to be receiving such a guest at this hour. Mouth agape, he couldn’t believe his luck. A friend! Not just any friend—a girl! Pluto readied himself to graciously receive Noby Noby Girl, but he was in the middle of revolving, and wound up embarrassingly turning his back on her (a faux pas in planetary social circles). But Noby Noby Girl was super chill about it, wrapping her wormy, heart-patterned tendrils around him in the cross-planetary embrace Pluto he had waited all his life for.

Reaching Pluto means that the planet finally opens up as a playable environment for players. Now, Pluto will be able to keep himself entertained for the years to come. Yet his moment in the sun with his love, Noby Noby Girl—who brought all this good fortune upon him—was sadly brief. It seems like almost as soon as she arrived, she already had one foot out of the door, turning back to make way for the sun again.

Heartbroken, Pluto will remember his momentary flirtation with Noby Noby Girl for the rest of his dwarf planet existence. And I guess, like the rest of us, he’ll have to wait quite a few more years before finally reconnecting with his stretching beauty again.