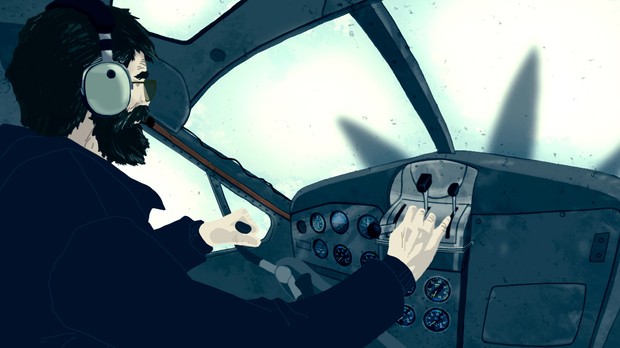 It can be tough to remember just how many Canadians work in videogames. Development studios span the country, teams from Alberta’s BioWare to Québec’s Ubisoft Montréal creating some of the best loved and most influential titles in the medium. Despite this, players would be hard pressed to find any scrap of Canadian national identity in domestically developed games like Far Cry 3, Mass Effect, or Sleeping Dogs.

Raphael van Lierop, Founder and Creative Director of Hinterland Games, is looking to change this with The Long Dark, a recently crowd funded first-person survival game that celebrates its developer’s culture.

Hinterland is made up of an impressive group of industry veterans, members of the team having worked on games like League of Legends and Warhammer 40,000: Space Marine as well as entries to the Company of Heroes, God of War, and Saint’s Row series. When it came time for the newly assembled studio to begin working on its own debut, however, van Lierop decided to create a game that is decidedly different from any of the projects members of his team had been involved with before—one that reflected his own background and cultural identity.

The studio is located in a place where bears lumber past the office during the autumn months.

“Hinterland is headquartered in Cumberland, British Columbia, which is an old mining town nestled at the foot of a mountain range,” van Lierop says. The studio is located a five minute walk from hiking trails that twist through the woods, a 15-minute drive from the coast of the Pacific Ocean, and is a place where bears lumber past the office during the autumn months. This setting isn’t so different from the one currently being created in The Long Dark, a game that puts players in the boots of stranded bush pilot William Mackenzie as he attempts to navigate the perils of a Pacific Northwest where all technology has suddenly stopped functioning. Though the game’s setting is an imagined blend of real-world locations rather than an exact facsimile of Hinterland’s B.C. home, van Lierop admits that The Long Dark‘s wilderness is “very much inspired by Vancouver Island” and includes “many familiar references” that will allow “any Canadian [to] recognize the game as being set in Canada.”

This wouldn’t be particularly noteworthy if van Lierop was directing a film or writing a novel, but in a videogame industry where games set anywhere outside of major American cities are an anomaly, The Long Dark‘s distinctly Canadian identity makes it unique. “Let’s be honest, this game could have been about anything,” van Lierop says. “But I’ve always been frustrated and irritated by working as a Canadian in an industry that does everything it can to polish off any kind of cultural identity that might find its way into a game.” For him, the decision to set The Long Dark in an environment that so closely resembles his Cumberland home was a natural one. “We have art, music, literature, philosophy, etc. that is distinctly Canadian. Why not a game?”

Despite the existence of so many noteworthy Canadian developers, the nation is almost never used as a setting. “You can’t justify giving a massive blockbuster multi-million dollar game a clear national identity because you need it to sell to a worldwide audience,” says van Lierop. Canadian studios like BioWare, Relic Entertainment, Eidos Montréal, and United Front Games release their work through international publishers such as Electronic Arts or Square Enix. Van Lierop believes that, in the interest of creating titles that are as widely acceptable as possible, a developer’s cultural identity is often sacrificed in the name of commerce.

The Long Dark is an extremely fresh concept. But its plot is very much in the tradition of Canadian storytelling.

“I’d like to think that if [The Long Dark] is successful, we can inspire other developers to approach their projects from more of a thematic, emotional place, versus thinking about them like a product,” van Lierop says. “Games are made by people, not robots. If you don’t feel the presence of the creator in the work, you are missing something really profound from the experience.”

This is certainly true for Hinterland. The Long Dark is, for videogames, an extremely fresh concept. But its plot—an isolated person desperately hoping to survive an indifferent nature—is very much in the tradition of Canadian storytelling. Setting the game anywhere other than Canada would take away from a work that is, in essence, an exploration of a phenomenon embedded in the national consciousness. Northrop Frye’s Conclusion to a Literary History of Canada and Margaret Atwood’s Survival, two seminal pieces from Canadian literary criticism’s belated formation in the 1970s, identified a recurring theme in Canadian art dubbed “garrison mentality.” Both Frye and Atwood see Canadian work as preoccupied with the influence of the more powerful nations, like the United States and United Kingdom, that dictate the country’s fate. They also, just as importantly, point to the prevalence of an anxiety that centres on the vast wilderness that comprises so much of Canada’s geography.

The garrison mentality is at the core of The Long Dark, a game premised on the idea of civilization slipping off, as van Lierop puts it, the “knife edge” between the comforts of technology and the harsh indifference of nature. Canada, a large country with a population concentrated in a few widely dispersed urban centres, is always aware of just how fragile its best efforts at warding off the natural world can be. “Our national art is defined by being in a vice, with the massive imposing wilderness above us, and our fears of being assimilated into American culture below us,” Van Lierop says.

“I think we suffer from [a] terrible inferiority complex.”

Nowhere is the latter worry more pronounced than in Canada’s contribution to the increasingly influential medium of videogames. By refusing to submit to the homogenizing influences of the mainstream industry, though, Hinterland may be able to show a new way forward where developers can feel free to create games that express their cultural background.

“I think we suffer from [a] terrible inferiority complex,” Van Lierop says. “And it’s not that I think we should brag more, but we should feel proud of who we are and the fact that we are different and have our own point of view and our own things to say about the world. I think [Canadians] feel small because we define ourselves in relation to other countries [instead of] putting forward a clear identity of our own.