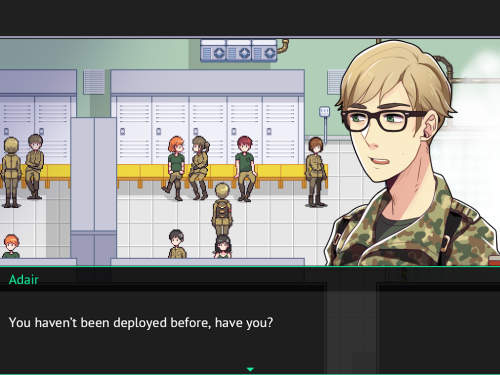 If a dystopian novel was written about the world that we live in right now, what would it look like? Chilean game maker Camila Gormaz wants to explore that in her upcoming game Long Gone Days. Unlike dead-Earth dystopias, where human society has overreached to such an extent that what remains of our planet is barely recognizable as the remains of what we see today, Long Gone Days takes place… soon. Say, the next 10 years. Rourke, the protagonist, abandons his post as a military sniper and ventures out into the world. He’s in an isolated area and the war proves inescapable, so what that means for the ruins of 2016 to 2026 remains to be seen. Rourke, whose story is described as “looking at mundane things […] through the eyes of a child” will discover it right along with us.

Long Gone Days will have a significant number of battles, though, they’re not the focus of the story. Two different kinds of battles—turn-based combat and a “sniper mode”—are augmented by a body-targeting system familiar to anyone who’s ever played Fallout 3 (2008), both of which are on display in the trailer, while Morale is a tracked factor that can be affected by your interactions with your party members. Each NPC is different; it’ll require more than just a pep talk to get your characters through every battle alive.


However, another mechanic may prove more interesting. Long Gone Days won’t follow the convenient practice of a universal language that makes other “international” games so dull. Instead of giving characters clumsy accents to signify their country of origin, Long Gone Days has them speak in their native language and requires you to recruit interpreters to interact with them: this includes buying items, accepting quests, etc. A small role, maybe, but an important one.

Translation is a notoriously overlooked skill. True, the best translators should be invisible, but society can’t function without them. How much of our modern, globalized world would be accessible without translation? More specifically, if you were thrown into a foreign country where you didn’t speak the language and had to buy bullets for your little pixelated gun, how much use would you be?

That’s where Long Gone Days’ interpreters come in handy. Not only do they add realism to a game that deals with international military, but they bring into the spotlight something that people often forget: it’s not only the soldiers shooting guns that are crucial to a war. Translators, like countless other unarmed roles, play a role that bigger and better guns can never fill, not in any science-fiction future—Uhura is a translator, y’all—and not today on Earth. Long Gone Days will make sure the importance of this role isn’t being forgotten.

Check out Long Gone Days’ demo on GameJolt and itch.io, and back it on Indiegogo.