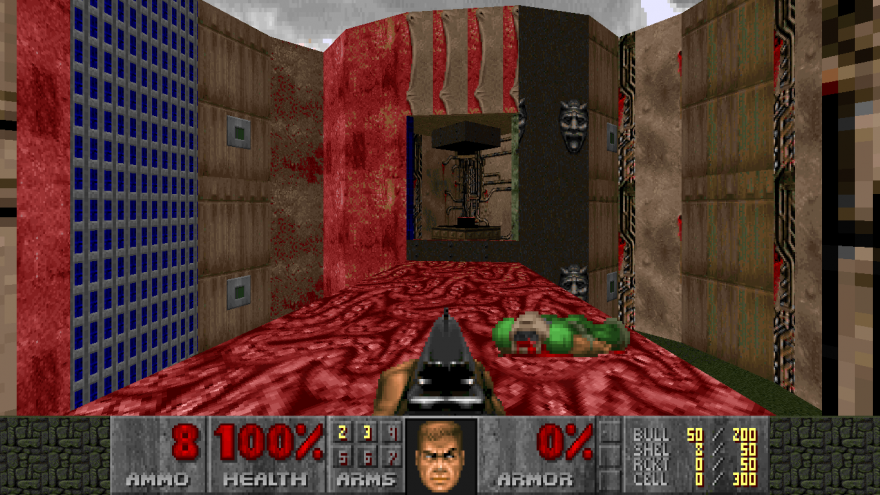 If you were to ask me what my identity is these days I might arm myself with a single syllable and shoot it at you like a bullet out of my mouth: “DOOM.” I’d really emphasize the ‘oo’ of the word too, growling it out like a war cry, as if your question was code for a call to arms. I’d be referring to the 1993 videogame and you’d probably take it for a mockery of what you might deem a straightforward question. Before, when I actually have given this as a response to that query, it was a jokey way of avoiding the train of thought that it invites. But now it might be the only sincere answer I could think to give.

It’s not that I’m obsessed with Doom (even though I am), it’s more a case of my identity being too confused to put into words. Any satisfying explanation would require hours of arresting you with a staccato beat of “um” and “ah.” Doom, on the other hand, is a sharp and singular concept that has been one of the only constants in my life. I’ve moved from place to place, re-learned my sexuality, joined and left organizations, and changed my circle of friends continuously over the years; yet Doom has been at least a yearly retreat for me. If anything, my love for Doom is the one piece of me that hasn’t budged in over 20 years. No matter my surroundings, I’ve always been able to start it up and shoot some hell beasts, fearing those familiar environmental growls and passing those same tech columns in my routine bullet blitzes across its geometry.

The increasing complexity and subsequent decentralization of identity is a topic that Ella Shohat and Robert Stam wrote about superbly. In Unthinking Eurocentrism, they noted that “the global circulation of images and sounds, goods and peoples” have altered our understanding and connection to national identity and communal belonging. Christina Noble applied this thinking in her introduction to the “Architecture & The Body” issue of The Architecture and Design Journal. Noble’s idea is that our identity is more and more affected by our access to an ever-increasing volume of mediated and digital experiences.

Noble argues that through the internet, television, and movies we expand our experiences through an indirect means. And so our identity isn’t attached to where we live or who we’ve met, it’s an “amalgam of all our own experiences combined with the experiences of others shared through various media.” In this, she includes (though does not mention) phenomenon like Let’s Plays on YouTube and live video streaming. Videogames, especially, have become shared experiences as we pass around tips, guides, and even first-time playthroughs with one another. And so we’re increasingly seeing people associate identity with their third-party experiences of these games. The top gaming YouTubers reinforce this by giving their fans a collective name: if you watch PewDiePie you’re a “bro,” or if NerdCubed is your host then you’re a “procrastinator.” This may go towards explaining why people seem to enjoy watching others play games more than they do playing them firsthand.

the sights and sounds of Doom as a kind of home.

This concept is also informed by the rise of the term “netizen”—a person that habitually spends lengthy periods of time on the internet. The idea of a netizen is that your closest association to home is the internet. The implication is that the real world has become so unpredictable—as various cultural boundaries break down, and our bodies experience space in an ever more transient manner due to technology—that the virtual world acts as a convenient and comforting surrogate. We may move house, relationships may crumble, but we can always return to our communities on the internet. It helps that location and time matter much less there than they do outside of it.

In my case, that solid foundation upon which I can construct an identity is found in Doom. And what has kept me playing this rugged shooter over the years is its community that still, to this day, is heavily involved in remixing it. It started over 20 years ago as fans of the game made their own editing tools in order to build levels and modify data. This was necessary as the game’s creator Id Software didn’t officially enable this by making the source code public for a number of years. This communal effort has continued to expand ever since it started with some dedicated fans capable of completely altering the game so that it barely even resembles the original. And so Doom exists as a granfalloon: a mass composed of and sustained by many people, united in their identity and purpose, which is to continuously improve and reshape the game. These people exist all over the globe and many of them pass through Doomworld.com and its forums, sometimes abandoning it and then returning years later.

One of those people is London-based music and videogame tinkerer Jazz Mickle. He’s been involved in the Doomworld forums for a while and contributes tools and maps of his own creation to it. Many others also do this, but Mickle’s recent efforts are different in that they encourage others to rethink their approach. Mickle made and shared a bunch of “tiny dumb tools,” two of which help toward randomizing the textures in Doom maps to “help mix things up a bit.” Talking to me about his texture randomizer, Mickle describes it as “curated destruction,” noting that it was important to him that the results were still readable and palatable. “The tool works in a specific way, only randomizing textures from the level it’s in, and ensuring textures are swapped one for one instead of just making a huge mess over the entire level.”

This balance of control and chaos that Mickle aimed for is interesting in that it tries to remain faithful to Doom while providing enough change for it to have an alien quality. To go too far and create an “unreadable glitch world,” as Mickle put it, wouldn’t retain the Doom identity of a map. This is very important. Consider that the people this tool is serving are those that, perhaps like myself, have come to see the sights and sounds of Doom as a kind of home. Mickle’s tools, then, are akin to repainting the walls of your house. You want a change but not one that entirely removes the connection you have with those walls. In the case of Doom, instead of a new wallpaper, Mickle’s tools offer “buildings made out of doors, hallways built out of switches, and pillars made of tekwall.” This is a change that may give even a veteran player pause as they take in the new arrangement. It’s an uncanny reconfiguration of Doom that helps to keep the game surprising and creepy without losing its recognizable traits.

This semi-destructive mission is pointed at the thousands upon thousands of custom maps that manage only an unremarkable reassembly of Doom‘s virtual spaces. Trawl through enough of them and they start to lose their appeal. With that comes disinterest in the game and its community over time. And if your identity, or at least part of it, is formed through a connection with Doom then this does not bode well. Trying to encourage others to avoid this repetition is why Mickle also made a map theme generator. Every time you load it up it’ll spew out a selection of words from its curated database, which are meant to inspire wilder custom map designs. It also has gameplay style and rules generators to further inspire those who use it with extra demands or restrictions. The links at the bottom of its page are maps that were made using the theme generator as a starting point.

As with the texture randomizer, Mickle’s map theme generator deliberately avoids churning out results that have been seen many times before. “It came from many discussions about how the vast majority of mapsets made using the same Techbase > Tech/Hell > Hell progression, which—while still being able to bring some surprises with some imagination—has been done to death.” This theme progression acts as the blueprint for custom content as it’s what the game’s stock textures were intended to serve, but as Mickle points out, artists have contributed countless texture packs that allow for more creativity within Doom‘s format, and it’s those he wouldn’t mind being used more.

One question that’s worth asking regarding the Doom community is: why Doom? The game is nearly 22-years-old now and there are signs of its community-made content becoming saturated. So why are people still playing it, and why are there still loads of them gathered around it, continuing to make new content for it? Mickle reckons that even the upcoming Doom 4 and its SnapMap editor, which seems primed for harboring a community with its quick and easy map editing, won’t pull the original Doom‘s community away. Mickle reasons that “the people around making levels nowadays have passed on Quake, Half-Life, Source, and Doom 3 editors to make levels for the original Doom. They chose a specific target, when there are much more powerful games out there to mod.”

The reasons for this are probably as numerous as the people that make up the Doom community. But my gut tells me that a primary reason is that people have grown identities there, trading ideas with Doom as their medium. Doom‘s popularity 20 years ago and the fact that it led to one of the first widely used community-made game editors has meant that people grew attached to the shared experience it cultivated. There are those in the Doomworld forums who have known each other through their usernames for years. Some are held up as experts and artists that helped to direct the creativity of the entire active community. There’s a history there that is maintained with the annual Cacodemon Awards. Some contribute to the Doom Wiki, detailing as much of the knowledge gained from two decades with the game as possible, handing it down to new members to read and learn. For anyone that has significantly been a part of this to suddenly abandon it all would be to lose part of who they are.