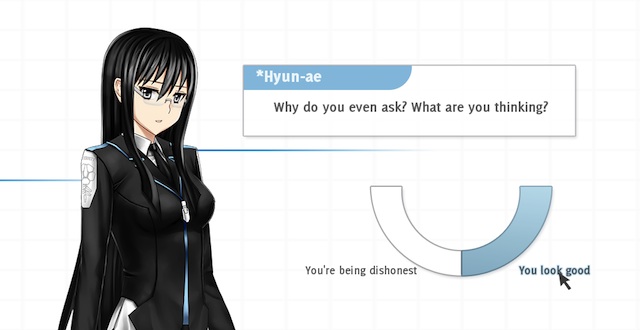 Last week, in his typical chauvinistic air, the conservative talk-show host Rush Limbaugh, a man who never met a right-wing Republican he didn’t like, caused controversy when he called a Georgetown student a slut. Her offense? She testified before Congress that employers’ insurance plans should include the cost of birth control.

Limbaugh’s remark affirmed what I had been reading in Christine Love’s latest creation Analogue: A Hate Story, an impressive work of digital fiction with a strong feminist stance. As a heterosexual male, sexism is not something I’m 100-percent comfortable writing about. I thought I was just signing on to play a videogame. Yet here I am, writing about feminism. So what does Analogue say to the straight male? That sexism is such a big part of human history that sometimes we don’t even notice it—I think. And to solve it, I need to get over being straight?

Analogue works under the assumption that sexism is the residue of outdated marriage customs. It has a point. The world has long operated under laws and etiquette that match one man to one woman (and sometimes to many), almost always showing favoritism to males. The past can indeed seem like “a hate story.”

In the popular television drama Mad Men, set in 1960s America, the wives stay at home and cook roasts while their husbands drink cocktails and hit on secretaries at the office. Go back to the Middle Ages, and you find men punishing noisy women by locking them in branks, metal contraptions that went over their heads to stop them from talking. In ancient Egypt, pharaohs commanded their entire harems, made of hundreds of women, to be buried alive alongside them in mastabas.

Analogue is an alternative take on ancient Korean society. Love lays it on thick. The subject matter ranges anywhere from domestic violence to miscarriages. It’s a small miracle that Analogue remains enjoyable—that it doesn’t come across like watching a daytime talk show, Oprah’s Next Chapter, or a tragic segment on Dateline. While the plot is fitting of Euripides, and dwells on the very low position of women, the vibe is strangely upbeat. It helps that it is narrated by cute cosplay girls. Love’s personality—and her bright pink hair—shines through.

It feels more relevant than a game, and more plugged-in than a book.

The game begins when you activate the hibernating computer system of a long-abandoned spaceship. You are greeted by an artificial intelligence, a long-legged schoolgirl in a short skirt. She opens the ship’s computer log for you. The log serves as a window into a terrible past. This past takes place in the “2000s,” so it is still in our future. Yet, for some reason that isn’t fully explained, it resembles 15th-century Korea. If that’s confusing, just think of the episode of Star Trek where the crew of the Enterprise is enslaved by the Greek god Apollo.

As you rummage through the digital relics of a lost civilization, you begin to piece together the “hate story.” You eavesdrop on a terrible past where women are not even second-class citizens. But occasionally you find a silver lining. In one email thread you read, two women, who are madly in love with one another, laugh wholeheartedly at their master’s impotence, despite the helplessness of their romance.

While the moral is that society is uncomfortably straight, the narrative structure has issues with straightness too. Analogue is navigated on whims. One of the first things you are shown is a royal family tree. Similarly, the narrative unfolds like a diagram. As you dig through the digital archives, new plotlines open—revealing different sides of the story. You follow up on arranged marriages, girls hatched from incubators, and the disastrous case where a bride is unable to produce an heir. (Of course, the woman is to blame.)

The result feels fresh. Novelists such as William Burroughs made strides toward writing nonlinearly, but were confined by the margins of the page. Burroughs’ prerogative was to “destroy all rational thought.” Though Naked Lunch cannot be described in terms of plot, it is nevertheless read from left to right, straight through. Theoretically, a digital work of fiction could move in any possible direction. Analogue takes the first step, arranging the plot in a web-like interface.

The shift recalls Petronius’ Satyricon, a racy work of poetry and prose written in the times of Nero. Satyricon broke away from the conventions spelled out by Aristotle in Poetics, putting priority on its characters—not the plot. Instead of sticking to the rules of a tragedy or a comedy, it focused on the personality of three young men in a love triangle. It followed their homoerotic adventures, lingering on the heartbreak and rapture of their affairs.

Analogue makes a similar break, distancing itself from the modern novel. Here, we see the promise of the digital novel, which emphasizes form as well as story. I can read about a courtesan, quiz my artificial-intelligence sidekick about her, and then hop onto a computer terminal to retrieve more information. While the gaps in Satyricon’s manuscript have been lost to time, Analogue’s missing pages are part of the fiction. Its past is revealed through diaries, blog posts, and emails—some deleted—that give a partial view.

This arrangement is something anyone in the First World is familiar with: clicking on links, reading emails, and researching on a computer. When trouble arose, it felt perfectly natural for me to go on Twitter and ask Love how to solve one of the game’s few puzzles. Analogue maintains a pretense that its story is happening over a network similar to the internet. It also addresses a socially relevant topic. And it involves a degree of choice. Because of these things, it feels more relevant than a game, and more plugged-in than a book. It was able to speak to me more directly.

I must admit, at first this newfound directness was a turnoff. I wrote in my notes, quite nastily, that the quality of writing was equal to first-rate fan fiction. Little did I know that I was being set up. Later, when the character Mute, dressed in a traditional Korean hanbok, said, “There’s a reason why men’s poetry is what gets studied and taught, and women’s poetry is just used for seduction,” I felt like a heel. Had I insulted the writing because I am male? Had my preconceptions about women influenced my opinion? I hoped not, but the fact that I had been fairly rude to the female narrator, for no apparent reason, didn’t ease my conscience.

The past can indeed seem like “a hate story.”

Mute is another of the game’s AIs, whom you summon from the database. She fetches files for you and frequently throws in her two cents. Lesbianism is “gross.” Women excel at scheming. So-and-so is a “bitch.” And a “whore.” This was deeply ironic, once I learned that the androgynous Mute was, in fact, a woman. She is Analogue’s Huck Finn character, the boy from Twain’s controversial book who refers to his best friend as the N-word. Like Huck, Mute has warped morals. As do the majority of the characters in this backward society, which occasionally looks like our own.

“She’s got the biggest tits I’ve ever seen,” remarks one man to another in the game, reminding me of a group of businessmen I recently overheard sizing up women at a bar. “Is she ugly or not? I can’t tell from here,” one had said. And I did look, too. Was that sexist? For that matter, why didn’t I reference a single female author in writing this review? Can I pass that off on society?

Obviously, when Rush Limbaugh calls a woman a prostitute for speaking up about contraceptives, it’s sexist. But what about using the word “bitch”? Isn’t that just as bad? Is it a case where it is OK for women to say it, but not men? I’m not exactly sure where gender biases begin or end. Analogue left me with more questions than answers. And that is an accomplishment. It makes me think, without telling me what to think. In a revealing letter found in the game, a lesbian writes to her friend, “Was I playing the man’s role, or were you?”