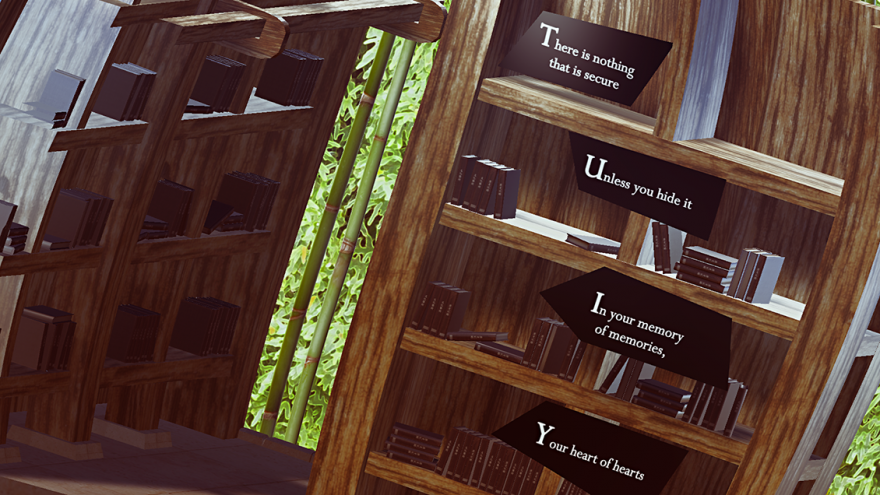 The world of Solace State opens up before me, its buildings cross-cut and becoming transparent as Chloe, a “woman of many [identities] who gets caught up in a journey of dissent, deception and redemption” navigates a foreign, 21st century cosmopolitan city-state. “An isometric camera cuts in, and you’re hacking into the building,” says Tanya Kan, the lead designer and founder of Vivid Foundry as she demonstrates Solace State for me. “It’s a way of depicting open-societies, or of trying to reveal more of the world.” As 2D art is overlaid on 3D environments, I’m reminded of origami: detailed, delicate, intricate. Compartmentalized facets combining to form structures, just as conversations can combine to inform identities and cultures.

Solace State takes the form of a 3D visual novel. In it, characters traverse physical, political, and ideological divisions to reach one another as all around them a population bristles under the thumb of a surveillance state. The game is interactive by way of infrequent dialogue trees, but the predominant mechanism of the game is listening. Chloe gains trust by listening to other characters’ stories and observing foreign urban spaces and cultures as they transform from the unfamiliar to the familiar. It’s in this that Solace State is evocative of Christine Love’s “Love Conquers All“ games, or Peter Brinson and Kurosh ValaNejad’s The Cat and the Coup (2011). These games sit at the intersection of identity politics, power, and technology, to explore real-world relationships and events.

I caught up with Kan as she was returning from a talk about Solace State and the politics of affect at the Different Games Conference in Brooklyn. “The idea is that you affect others and others affect you consistently and continuously,” she said about Solace State. “There’s not one root cause of events, as is in contrast with, for example, Marxism and its modes of production. It’s much more indeterminable. What this means is that politics [are] very open and political change is bound to happen.”

Solace State creates both the conditions for a dialogue about post-colonialism, and provides an example of that dialogue in action. Its characters represent a polyglot against a backdrop of an encroaching surveillance state. The aesthetic is futuristic in a way that invites comparison to Blade Runner (1982), taking place in the near future in a fictional city-state called Abraxa Harbour, where an elite live far above the worker class. And yet the themes of privacy, security, economic inequality, and technological empowerment should feel hauntingly familiar, timely, almost urgent to anyone who occasionally browses the news. Across cultures these stories are increasingly universal. “The concerns of poverty and of the shrinking middle class echoes across generations,” says Kan. “That’s why the story takes place in an imaginary city, so that people can’t say “this is only about Asia. It’s happening everywhere.”

If this sounds like heady content, it’s because it can be. In the course of our discussion, Kan references “Rebel Girls: Youth Activism and Social Change Across the Americas” by Jessica Taft, Deleuze’s rhizome, Foucault’s panopticon, Baudrillard’s hypermodernity, as well as a play by Bernard Shaw and the films of Wong Kar-wai. The theoretical framework informing Solace State’s development is, in a word, robust, and the game sits at the confluence of aesthetics, dialogues, states of being and political positions. But Kan insists the player doesn’t need to be versed in post-structural or post-colonial theory.

“It’s very accessible. If you like the theory, you’ll be able to sense it, but if you’re a person who likes to read the news you’ll enjoy the game,” Kan says. “I like having this reflect the norms of our time, and so it’s open-ended. I hope that people come away from this as a self-reflexive piece and that it starts a discussion.”

Solace State is currently in the making for PC. You can read more about it on its website.