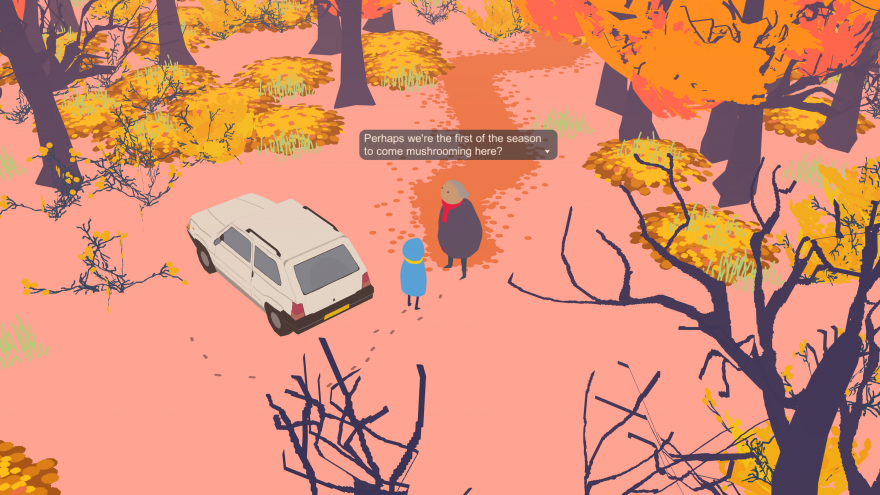 “My grandmother is probably the most important person ever to me,” writes illustrator and game maker Florian Veltman. This text appears on the website for his latest game—it’s to be called Lieve Oma, the Dutch for “Dear Grandmother”—which Veltman confirms to me will very much be framed as a letter to his grandmother. But rather than have us stare at an inked page, Lieve Oma gives us an autumnal forest to explore, in which we play a young girl who goes mushroom picking with her grandmother.

Lieve Oma originally started out dedicated to the people in our lives who give us the stability and space we require as a child to grow. But this basis only lent itself to hitting generic, broad notes and lacked a distinct personality. Hence Veltman decided to spin it with an autobiographical angle, basing the interaction between the two characters on his relationship with his own grandmother.

Due to this, Lieve Oma will be dialogue-heavy, as it is mostly in the words, but also the behavior, of the grandmother in the game that the child finds a form of comfort. Importantly, this dialogue isn’t there to create a narrative arc; it exists only to divulge the sensitivity of the moment. Indeed, Veltman further says that the mushroom picking is only a pretext used by the grandmother to help the child get her mind off other matters. It seems there are shades of something darker happening off-screen, probably back at home, away from the joyful mounds of shrubbery and fallen leaves. The text on the website tells us that this little girl knows that grandmother only brought her to this forest “to get [her] to talk about what’s actually going on.”

Beyond the dialogue, Veltman is finding that drawing, sculpting, and “grooming” the game’s forest is serving as another way to pay tribute to his grandmother. “[I] feel like working on the forest is probably the closest I get to actually making a portrait of my grandmother,” he tells me. “Not because of the ‘autumnal sunset colours’, but because despite what it may evoke on the surface, everything still seems very vibrant, warm, and pleasant.”

The forest is surely the game’s biggest immediate draw, with a range of blobby auburn afros sitting atop the trees, and golden brown pools of leaves dotting the ground. It’s all meant to evoke the “bittersweet mood” that Veltman chases, especially as these seasonal colors visually contrast (though not harshly) with the peachy-pink ground. That almost any shot taken directly in-game is pleasant is testament to Veltman’s work here.

Speaking of which, being an illustrator who learned the craft among the vibrant scene in France, Veltman is especially interested in what every color selection and object placement brings to the image and the eye. He’s found this process relaxing, helping him to recover after a burn out, which occurred as he worked on making a new version of his team-built game jam entry Endless Express. He needed something comforting to help him through the aftermath, and as if by instinct, he turned to the softly-spoken solace of his grandmother.