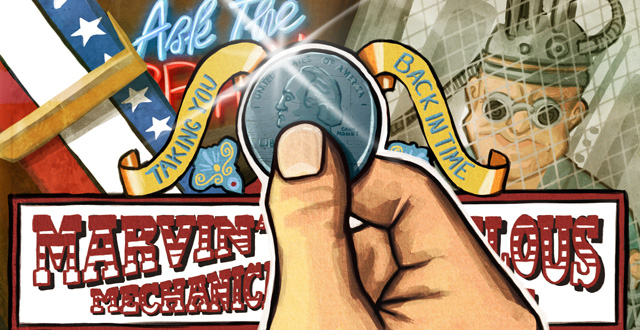 Come to Marvin’s and you will lose in Tic-Tac-Toe to a chicken. You will see two wooden marionettes dance a polka. You will witness the morning routine of an invisible woman and watch a man bathe in a tub filled with spaghetti (“Parmesan from one tap, and sauce from the other. How sensible!”). You will have your hand chopped off at the wrist by The Great Chopandoff, fake blood gushing out from the unseen wound in pulsing fits of hemoglobin. You will touch your fingers to brain wave sensors and follow the instructions—“THINK HARD”—but will you make the wine glasses shatter? Only The Mind Amplifier knows.

Two decades ago, before the Best Buy across the street opened, before a GameStop entered the same plaza, a pharmacist named Marvin Yagoda rented space to hold his growing accumulation of eccentric oddities and old-world diversions. To pay the rent he added a few popular arcade games and invited in the suburban youth of Farmington Hills, MI. I grew up miles away. My buddy’s grandfather would often take us. I still remember the ancient man’s wallet, thick like sirloin; he’d flip open the leather and displace two bills from what looked like thousands, giving one to each of us. We’d run off to change the paper into a handful of coins.

Now, when I come home to visit family, I also visit Mr. Yagoda’s treasury of wonderful machines. My youthful favorites—NBA Jam, Mortal Kombat II—are gone. But what remains offers a kaleidoscopic window into how we used to entertain ourselves: before capacitive touchscreens, before CRT monitors, before the mighty pixel itself.

My first coins go into a menacing box called “Three Trials of Terror.”  First shown in 1930 at the London Tower, it’s less a game and more a test of courage. I stick my hand through an opening, hold a button down, and peer into a set of goggles. Through the glass I see that hand, now encased in what looks like a cage. Soon the first trial begins. A circular blade, limned with red, spins and falls slowly down. Spears enter in from both sides, nearing important veins. Even though I know it’s a gag, the danger feels imminent; I keep my hand firmly on the button. The box goes dark—the first test has been passed. Trial No. 2 involves darting rats and a flurry of unseen tendrils tickling my palm; Trial No. 3 sees the floor opening up, revealing glowing embers and assorted bones burnt by Hellfire, as a fan blows warm air from underneath my fingers. Chuckling and nervous, I keep that button pressed down. A deep voice says, “You are invincible.” Deemed fit by the ancients, I progress deeper into the museum.

“Much of this cloud of visual images fades at once, like the dreams that leave no trace in the memory, but what does not fade is a feeling of alienation and discomfort.”

On a Wednesday afternoon, the population exploring this strange space is much like the objects held within: eclectic and charmingly mashed together. A bald gent sits at a picnic table, an oxygen tube running into his nose. Behind him, the “Improved Patented Electronic Passion Tester” runs through its sequence of vertical colored lamps. A young woman with the deep tan of the Mediterranean and a yellow tank-top walks by, her phone somehow a plausible alternative to all that surrounds her. A solo fellow in his mid-40s holds two steel bulbs, testing his resilience to 10,000 volts of electronic sizzle. Two skinny hipsters gaze into the glowing eyes of a giant cobra. An African-American father helps his daughter onto a miniature carousel, complete with golden poles and manicured horses. Her shirt depicts a recognizable damsel-in-distress clad in pink. “This Princess saves herself,” the shirt says. All appear satisfied, even as they stroll haphazardly, their gaze wandering from ceiling to shoes. One gentleman pumps a quarter into Dr. Ralph Bingenpurge’s “County Food Inspector” station no fewer than five times in a row. All Ralph does is vomit dark fluid into a basket of empty wine bottles, his chin stained with years of repeat performances. Its allure is perverse, unquestionable: I can’t look away. What strange magic is this?

Clues and more questions abound. Enormous posters for mid-century illusionists cover the high walls. A distressed mannequin rests in the very electric chair used at Sing Sing Correctional Facility in New York from 1921 until the 1950s. Odd quotations, non sequiturs from beyond the grave, bombard my sliver of brain still cognizant. They Laughed At Henry Ford, Too… Do The Dead Materialize? A puppet-band of monkeys erupt into motion, waving their instruments in time. Zeppelins and biplanes fly overhead, suspended on a moving track attached to the ceiling. The massive overflow of kinetic energy impossibly melds into one seamless spectacle. I envision Marvin the Mastermind behind a velvet curtain somewhere, pulling levers and swiveling dials with the practiced mania of a submarine captain down far too long.

I sit down, come up for breath. Walk through the labyrinth of glass cabinets and automated puppets long enough and you feel differently than if you’d just plugged a Jackson’s worth of quarters into The House of the Dead 4. But why? I spy a mechanical diorama of tiny wooden folks sitting at a bar. Twenty-five cents later, their chunky movement and imagined repartee beguiles more than its artistry should afford. What makes these ancient shadowboxes so compelling?

Noted Italian writer Italo Calvino wrote in 1985 about the importance of certain values as we approached the new millennium. In a chapter on “Exactitude,” he writes, “We live in an unending rainfall of images. […] Much of this cloud of visual images fades at once, like the dreams that leave no trace in the memory, but what does not fade is a feeling of alienation and discomfort.” Twenty-five years later, his steady showers have turned to our constant downpours. And the screens these pictures play out on have multiplied, with resolutions sharp as razors and as likely to cut your attention. It dawns on me then—looking at this box home to thirsty marionettes—that the scene will stay here as long as my eyes remain. No commercial break interrupts their reverie. Pushing the button does not bring up a menu of alternate options, but allows them a repeat performance and nothing else.

Most everything in Marvin’s relies on its physicality, encourages tangible interaction: hold this metal grip for as long as you can withstand the shock; place your eyes in this viewfinder and watch if you dare…These antiquated amusements still have the capacity to astonish decades after their creation simply because they are objects in space. Moreover, we are the ones granting them this sudden vivacity. To a thrill-seeker in the 21st century, inoculated by an ever-changing display of burning pixels, the sight of a jerking animatronic Gypsy spouting its wisdom in pre-recorded snippets can inspire awe. Old world hokum becomes modern day holiness. To breathe life into corpses with a circle of silver—few entertainments offer greater joy than this semblance of creation, faked or otherwise.

Not everything here inspires religious beatitudes. Past the snack counter is a poster of Burt Reynolds. A wooden fig leaf is attached to the wall, covering Mr. Reynolds’ groin. A small handwritten note explains this is the centerfold of a 1972 issue of Cosmopolitan. “If you like,” the note continues, “you may lift the fig leaf.” Curious, I pick up the carved wood, and just when the hinge tilts high enough a large spotlight shines down on me, accompanied by the loud ringing of an alarm bell. I drop the leaf and skitter away.

Yagoda is constantly adding to his collection. He’ll buy antiques from vendors or stumble upon a rare find in the street. Frequently he has friends build unique creations just for his museum. The newest addition is a large container, emblazoned with faux military warnings, pretending to hide away some relic of Area 51. Pump in your 50 cents and the doors slide open, revealing an E.T. lookalike and revolving disco lights. You are now a contestant on Alien I. Q., a space trivia game played against BOB, a wrinkled animatronic puppet, whose canned insults are surprisingly effective at throwing you off. Later this month he plans to install “AutoWed,” a converted parking meter that “marries” any couple with enough change in their pockets.

Today’s digital toys will be tomorrow’s quaint keepsakes, no doubt. But will our grandchildren tug on our sleeves to go to “Randy’s Repository of Retina Displays?” Do their thousands of pixels really show us more than we already see? Calvino notes that, “as far as I know Italian is the only language in which the word vago (vague) also means ‘lovely, attractive.’” Marvin and his mechanical machines remain so enticing because of their requirement for messy, analog attention. Future Jon Jr. can have his ultra-fine resolution gizmos. As long as I can still have my fortune read by Louie the Cigar-Chomping Love Shrink.

Before leaving I buy a T-shirt. The DVDs were cheaper, but a wearable souvenir seems more appropriate. I ask the girl behind the counter if Mr. Yagoda ever comes in. She laughs. “Whenever he feels like it,” she says, adding, “He’s here frequently.” She’s worked there for the past four years. An older gentleman behind me overhears my question. “Marvin?” he asks, as if I’ve blighted the playful nature of this man by using the more formal surname. When she nods yes, he answers: “Genius.”  He looks up and around, wide-eyed, taking it all in. Then the man stumbles over to Alien I.Q. and loses a trivia contest to a plastic extraterrestrial.