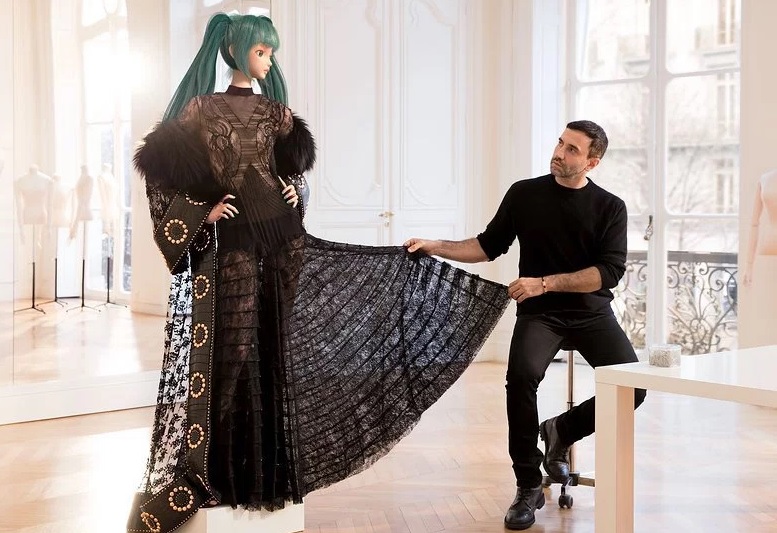 Fashion, like everything else in the age of technology, is about fear—fear of what is coming next; fear of looking silly in the long run; fear of trying something new. How else to explain the often-underwhelming interpretations of “Manus x Machina: Fashion In An Age Of Technology” theme for last night’s Costume Institute Gala at the Metropolitan Museum of Art? Technology is complicated, and a little scary.

To be fair, dodging the theme is a Met Gala tradition. Like a Top Chef contestant who can turn any prompt into a crudo, designers will always find ways to subvert the event’s theme. But the peculiar failings of this year’s Met Gala are particularly instructive, because the Manus x Machina prompt at least raises an interesting question: What does fashion look like in an age of technology?

A rosy @blakelively and @Burberry's Christopher Bailey just arrived to the #MetGala. pic.twitter.com/KIsU9aNKC1

But let us briefly suppose that “Fashion In An Age Of Technology,” though not the most precise of descriptors, actually has some meaning. (In the case of the actual Met exhibit being unveiled, it refers to fashion since the 19th century, encapsulating the field’s evolution since the sewing machine disrupted hand-made couture and offered different modes of production.) The subject presupposes that technology seeps into every crepuscule of our lives; it’s technology’s world and fashion is just living in it. How, then, to reconcile technologies of the future with designs that nod to couture’s past. Apparently, the answer to this question is to ape Fritz Lang’s Metropolis (1927)—one of those brief, iconic moments where futurism was actually wearable and overlapped with design in a way that no Google Glass, Apple Watch, or VR headset has yet to do. In other words, this:

Just wait—@KimKardashian and @kanyewest are about to step onto the #MetGala red carpet. pic.twitter.com/FTzjDADrIS

Or, if you’re Taylor Swift, the answer to this question is what might generously be described as “goth Metropolis???”:

All of which is to say that fashion in an age of technology is something you wear, but it isn’t really about wearables or any of the other buzzwords making the rounds. It’s a vibe as opposed to the thing itself. There is something to be said for this general disinterest in overt gadgetry, but it can easily veer into simple conservatism. At least we’ll always have Claire Danes’s majestic glow-in-the-dark Cinderella:

(Mind you, Katy Perry would like to have us know that she wore a light-up dress in 2010. The future can be fickle—and tacky.)

It is interesting, however, to note that the same cautious coexistence between fashion and technology also exists with virtual characters. Lightning, the protagonist of Final Fantasy XII, appeared in a Louis Vuitton campaign last summer. The idea of a videogame character “modeling” clothes was edgy, to be sure, but the fashion itself was remarkably staid. (Months after covering this campaign for Kill Screen, a poster of Lighting popped up on the Louis Vuitton shop near my home; she only looked mildly less lifelike than the other models):


More recently, in the days leading up to the Met Gala, Vogue asked Givenchy designer Riccardo Tisci to design a gown for the Japanese hologram musician, Hatsune Miku. While not something you might wear on a day-to-day basis, it is relatively tasteful and traditional—staid, even, considering it is worn by a hologram with fluorescent hair:

This, above all else, is what fashion looks like an age of technology. It is a weird series of collisions between traditional forces and crafts and modern influence. It is not a fitbit or a series of neon bulbs given the form of a dress, but the coexistence of various influences. Hatsune Miku is of our age and none at all—so too is her dress.