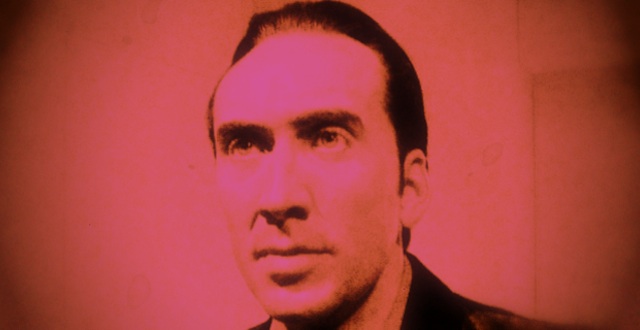 “It doesn’t matter how far you run,” Nicolas Cage’s character says in the trailer for the soon-to-be released Ghost Rider: Spirit of Vengeance, “there are some demons you just can’t escape.” The same could be said about the inability to escape some actors. Nicolas Cage has been in more than 60 movies to date. Even if a few are gone, from your mind, in 60 seconds, the man and his career need no introduction. Los Angeles artist Brandon Bird has paid homage to this cultural icon with his Nicolas Cage Adventure Set. As Mr. Bird says in his description of the playset, “The fate of Nicolas Cage is in your hands!” In a world—where I had questions—questions for Brandon Bird—Brandon Bird—had answers.

When I went to see Drive Angry 3D, the toothless man at the counter said, “It’s called Drive Angry 3D, but that’s just the title; we’re not showing it in 3D.” I think that really sums it up.

As Dr. Stanley Goodspeed from The Rock, Nic Cage said, “I love pressure. I eat it for breakfast.” Do you believe that?

I usually save pressure for lunch, or as a mid-morning snack.

Can you share some scenes from when you, or others you know, have played with the Nic Cage adventure set?

Playing with the Nicolas Cage Adventure Set is an intensely private and personal experience.

As Seth in City of Angels, Nic Cage said, “Some things are true whether you believe in them or not.” Why do you think he said that?

As shown in a deleted subplot, his angel character is a devout UFO conspiracy theorist.

Are you considering any other people for new adventure sets? Or is it all Nic Cage all the time?

No. I avoid repeating the same concept over and over again. I do a lot of silly products, but I try to match a subject with a product to create just the right level of WTF?. In this case, morose Nicolas Cage is something no child should ever want to play with. That said, I kind of want to make a sequel or expansion pack. Nic Cage needs his rocket boots.

While developing the Nic Cage Adventure Set, did you research other paper doll sets?

Colorforms—vinyl pieces you can stick and rearrange on a background. They used to make one for every single character and television show in the ’70s and ’80s, but by 1995 they were gone. My research was conducted largely between the ages of two and four.

As Ronny Cammareri in Moonstruck, Nic Cage said, “What’s wrong can never be made right.” How much did that line impact the design choices that went into the Nic Cage Adventure Set?

There is no wrong way to draw a Nicolas Cage.