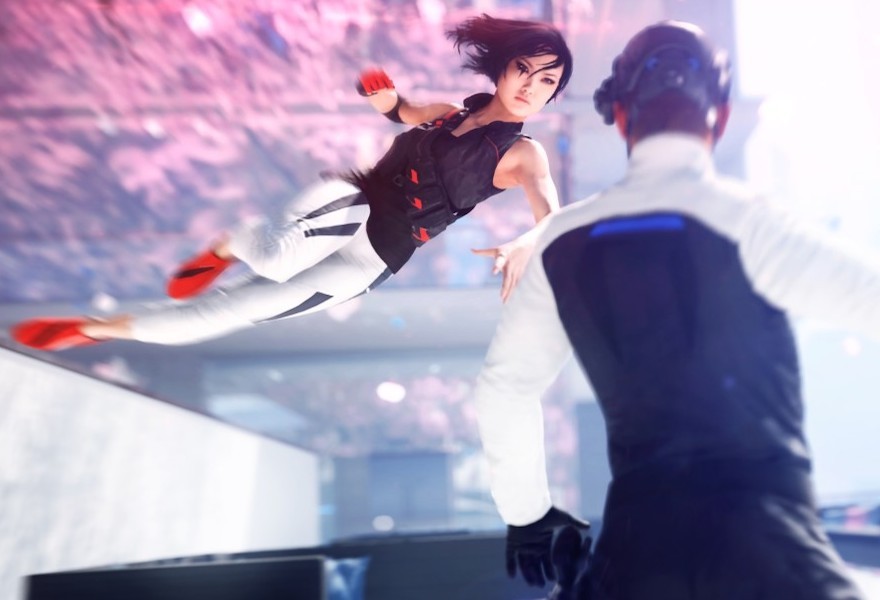 “Don’t get into any scraps,” a voice tells Faith over her comm about a minute into the latest trailer for Mirror’s Edge: Catalyst. Yet, by now, we’ve already seen Faith take out three guards, with more to come. Though most of the trailer is focused on the series’ signature parkour, it does bookend itself with combat sections, opening and closing on notes of violence.

It’s all thrilling enough to look at, but also a little dispiriting, at least for some of us. The first Mirror’s Edge was an exciting departure for DICE, most well-known for the Battlefield series, as it told a smaller and more personal story focused on movement and (mostly) non-violence.

With a first person perspective rarely seen in platforming games, it challenged the player with working out how to navigate cryptic urban environments (look for red!), and executing their solutions with hair-trigger timing. The game was at its best when presenting the player with open-ended obstacle courses, but it occasionally broke flow with jarring gunplay sections that felt at odds with the rest of the game.

Wisely, Catalyst has ditched the gunplay entirely, as was revealed at E3 earlier this year. This new trailer shows that in its place are now acrobatic takedown moves that allow Faith to eliminate enemies while still keeping her forward momentum. The idea seems to be to combine parkour with combat to deliver a distinctly more Mirror’s Edge experience that doesn’t break the flow of movement. It’s a wise decision that seeks to improve upon the first title, but is it enough to make punching dudes feel appropriate for someone who’s supposed to be a runner? We’ll have to wait and see.

Mirror’s Edge: Catalyst will be out in February 2016 for PC, PlayStation 4, and Xbox One.