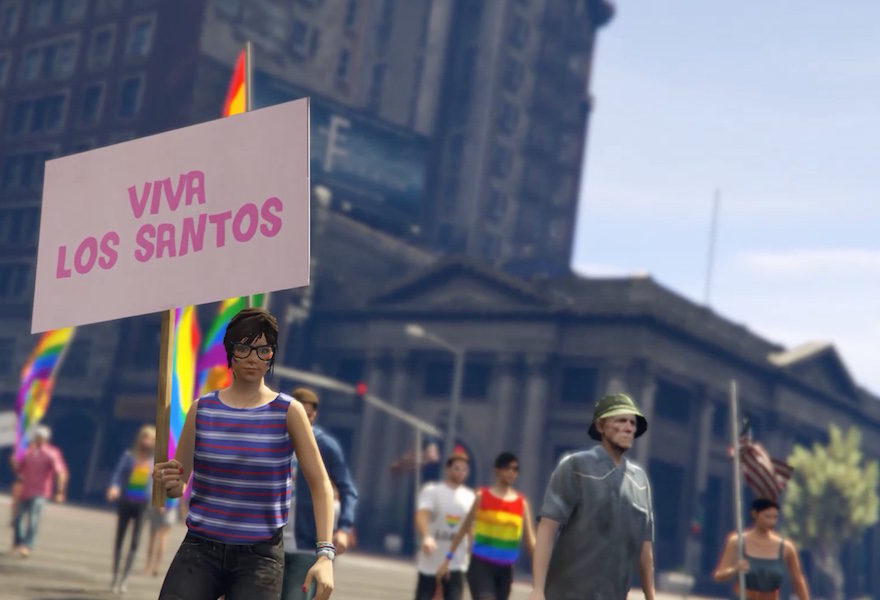 “Almost fooled me, bro-she!” says Grand Theft Auto V (2013) protagonist Franklin while passing by a group of trans women. “He’s so deep in the closet, his friends call him mothballs!” yells the game’s parody of Simon Cowell at a contestant on his singing competition. “Post Op: No Longer Just Mail” says the side of one of the game’s UPS stand-in brown delivery trucks as it drives by. Grand Theft Auto V has about one of the most open worlds in gaming, but in jokes like these, much of that world is made inaccessible for all but the most heteronormative of players.

Enter “Los Santos Pride,” a mod from Sweden’s Stockholm Pride festival that hopes to queer the digital city and make its already impressive space even more open by making it welcome to all. “GTA 5 takes place in Los Santos, a city that offers everything from burger joints and night clubs to supermarkets and fashion outlets,” the group writes on its website. “In short, Los Santos has everything you can expect from a real city. Well, except for one thing: a Pride parade.”


Created in collaboration with modders such as scripter JulioNiB, whose previous work includes bringing Hulk and Iron Man to the game, the mod adds a new rainbow-clad parade to the virtual city’s streets, complete with matching flags, DJs, dancers, people carrying signs like “love comes in all colors,” and plenty of attendees watching from the sidelines.

Of course, given Grand Theft Auto’s tendency to break into violence at any point and the difficulty that poses for celebration in light of recent events like the Pulse nightclub shooting in Orlando, Stockholm Pride president Christian Valtersson writes “We’ve made the parade indestructible. Not to moralize, but rather to show that love will always triumph over hate.” Looking at the YouTube comments on the mod’s trailer, that’s probably not a bad idea.

“love will always triumph over hate”

Towards the end of the trailer, pansexual protagonist Trevor, whose sexuality is arguably treated within the game proper as just yet another facet of his unstable personality, leads the parade with his typical gusto, standing on top of a float and waving his arms back and forth without shame. If his queerness was treated as a quirk or wacky detail before, here it is an important and valid part of who he is.

“The game has generated several controversies related to its violence and depiction of women,” Stockholm Pride writes in a press release. “Today, the game is about to get more colorful and inclusive.”

The parade isn’t perfect, as it only features rainbow flags rather than representing a wider cross-section of the LGBT community, but the mod does mark a significant widening of the types of players Los Santos is built to suit. Grand Theft Auto is known for the detail and care put into its spaces, but with mods like “Los Santos Pride,” the game’s more frequently ignored LGBT players are finally getting some of that care as well, even if it had to come unofficially. Your move, Grand Theft Auto VI.