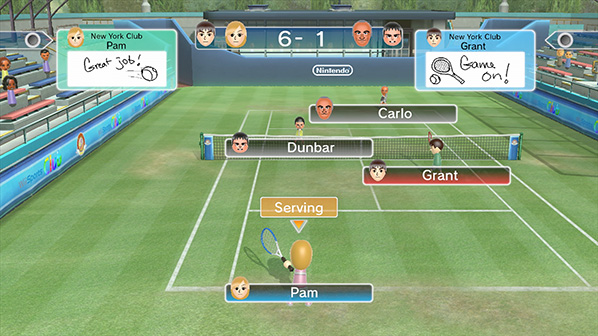 Wii Sports was kind of a big deal. The seminal argument for motion-control, this collection of five demos is the largest selling game of all-time, the result of Nintendo of America’s keen decision to bundle each Wii console with the disc (it was sold separately in Japan). At the time, swinging the Wii Remote to smack an ace or pick up a spare felt alien and new: moreover, it felt good. When curious folks learned the same full action could be replaced with tight wrist jerks, colloquially known as “waggle,” the luster wore off for some. Still, the system and this game sparked a phenomenon. Over 100 million sold, et cetera. My brother bought one. My wife’s grandmother bought one. These are now-familiar stories, but the sheer onslaught of mania for this humble little diversion cannot be overstated. Its popularity may have even damaged the system’s long-term viability; for many the Wii was only Wii Sports, and vice versa.

The battle for attention this holiday season is fierce, the aisles packed with flashy boxes and hefty promises.

Seven years later and the landscape has changed. Microsoft and Sony are releasing uber-powerful machines capable of great feats: video-streaming, play-as-you-download, renewable fossil fuel generation (patch forthcoming). Apple’s tablet and phone dominance continues to shift developer resources into projects soon to be swallowed up by the gaping crevasse known as the App Store. Valve lingers on the outskirts, teasing revolution with game-computers that slide next to your BluRay player. The battle for attention this holiday season is fierce, the aisles packed with flashy boxes and hefty promises.

And into this miasma steps Nintendo with, lo and behold, the ol’ giant-killer itself: Wii Sports. They’ve added a word—“Club,” referring to players’ states or provinces acting as geographic teams, breeding loyalty and cross-border rivalries with a legion of strangers. They’ve smoothed out the edges, giving the simple visuals a sharp HD sheen. And they’ve opened up the party to those beyond the living room: Now all sports can be taken online. Bowling ain’t just for nanna anymore.

But here’s where the obvious, low-risk decision looks more like a full scale attack, albeit one with rose petals for bullets. One week prior to Wii Sports Club’s release, Nintendo launched Wii Fit U as a free download-only trial for owners of the original Balance Board. You know, that bathroom scale that Nintendo sold for $90 and now sits in over 40 million homes? There’s a new version of the game available looking mighty familiar to its Sports cousin: smoother, sharper, with refined community features and a low-entry price point. One week prior to that, Nintendo released Wii Party U, a brand-new game bundled with a Wii Remote for $49.99, effectively a $10 add-on cost to the controller itself.

The Wii U’s holiday line-up is the ultimate exercise in counter-programming. In the span of a month, Nintendo has refreshed two years worth of its last system’s signature software for their new, still-undernoticed hardware. All this in the face of looming leviathans pushed by Sony and Microsoft. Competition supplies the guns, cars, and noise? We’ll give you the serenity of yoga, the calm found in a shined bowling alley and its echoing lanes. The tactic often occurs in film release schedules: big-budget action movies release alongside slow-burn drama, or grisly horror gets pushed up against a touted romantic comedy. Different strokes, as they say.

The Wii U’s holiday line-up is the ultimate exercise in counter-programming.

Evidence of Nintendo’s quiet reluctance to play third-fiddle this holiday shows in their release dates for their two most popular franchises. Super Mario 3D World for Wii U and The Legend of Zelda: A Link Between Worlds for 3DS come out on November 22: the same day Microsoft launches their new Xbox One. (I worry for the United States’ energy grid on that day, keeping up with all those pulsing ions.) But it’s the preemptive trickling out of motion-controlled, experimental stalwarts in the Wii series that strikes the stranger note, and shows Nintendo’s hand. They don’t intend to give up on the massively mainstream audience they catered to and found in droves seven long years ago. Whether they’ll put down their iPads and pick up their Wii Remotes again is yet to be determined.

The problem is that most Wii U owners are the committed faithful, and not those curious onlookers who dabbled in trends. And after a year of slim support, Nintendo’s newest console owners are getting antsy. In this way, Wii Fit U and Wii Sports Club are surprising call-backs, pre-chewed bones on which to nibble for a hungry audience. Yet each cater to a demographic who, if my math skills from 9th grade Algebra hold up, have not yet re-upped and bought the HD successor. Stranger yet, the games most suitable for “casuals” (pardon the despised term) are accessible only through the download store, tucked away in press releases only read by the most diligent.

Will we all play Wii Sports again? Can a nation of health nuts and tub-tubs find the courage to step back onto their Balance Boards, or even find them in the first place? Nintendo sure hopes so. But this clandestine push for a pair of motion-equipped retreads smacks of laying out feed for a stable of horses long sent to the glue factory. Which begs the question: If nobody eats a sugarcube, is it any less sweet? Nay.