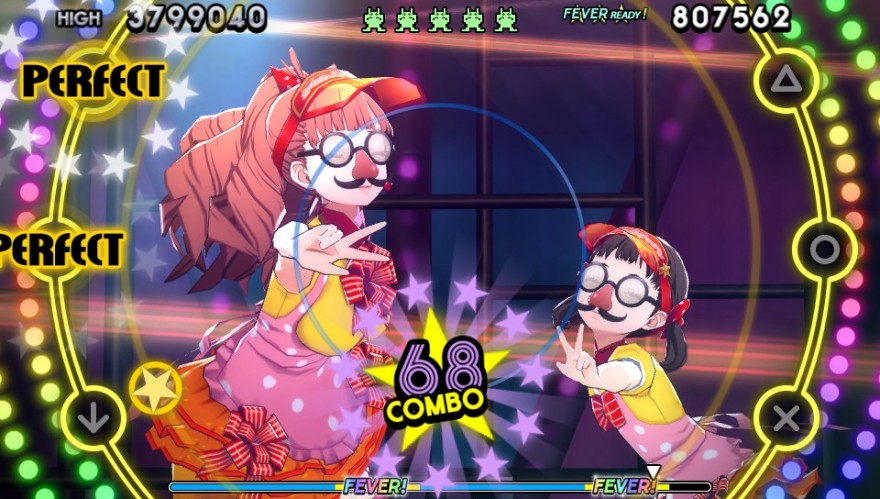 To talk about the PlayStation Vita is to talk about Persona 4. There is, in the marble-tiled Halls of Videogame History, a special gallery of games that serve as the perfect explication of all a videogame system’s finest attributes. Think of the way the big flat disc of the original Xbox controller made sense while lugging an assault rifle through Halo’s Library, or how naturally we connect the N64’s spongy joystick to sleepovers spent playing bighead mode in Goldeneye. In that fern-filled Gallery of Console-Actualizing Games, there exists one game stranger than any other: that is, the sprawling teen-angst fantasy of Persona 4, which was not designed for the PlayStation Vita but is nevertheless the game it was built to play.

Because the Vita is a bunch of things—it has a touchpad on the back, for no fucking reason—but what it really is is a big, beautiful screen that you can put on sleep mode really easily. Persona 4 is a massive game, its murder mystery saga built in discrete little chunks that can take up a five-minute bathroom break as easily as they can swallow a whole weekend, and it is also a massively beautiful game, a pop-art wash of anime surrealism and impossibly crisp little menus. These qualities, combined with the fact that almost nothing else of note has ever been released for the Vita, make it the only reason to own the system, but it is a truly beautiful reason all the same. I spent a handful of weeks popping into its world, taking history quizzes while waiting for onions to caramelize and picking my way through sprawling random dungeons when Thursday Night Football got boring. I sprinted through that game’s 75 hours, thanks in no small part to Shoji Meguro’s limber J-pop soundtrack, which took cues from American boom-bap hip-hop and schmaltzy lounge jazz as as much as it did the traditional videogame soundtrack reference points of “other videogames.”

And now, four years after that game’s release, comes Persona 4: Dancing All Night, which is not so much a sequel as a dancing game that is weirdly committed to the idea of also advancing its predecessor’s story. This is okay, though: “weirdly committed” is sort of the unifying thread among the larger Shin Megami Tensei series, of which Persona is but one branch. Taken together, the SMT games comprise a whole multiverse of sprawling games that invest an apocalyptic, quasi-pagan mythology with sprightly characters, whiplash plot twists and obsession-inducing mechanical depth. In that context, much of Dancing All Night falls flat, particularly the story mode, about which I don’t really have anything to say even after dozens of hours of playing. If you like visual novels, well, so be it, but even as a visual novel Dancing All Night lacks the verbal snap of something like Danganronpa. Its writing is markedly worse than a normal Persona game, but that is also the case for both of the Persona 4 fighting games, which I hadn’t mentioned yet, but yeah, they exist, and also the Persona 4 anime adaptation, which, yeah, also exists, but don’t worry about it. There is a lot of Persona 4 shit out there.

much of Dancing All Night falls flat, particularly the story mode

What Dancing All Night underlines is that, perhaps, there shouldn’t be. Persona 4 is not a universe unto itself, worth exploring and returning to a billion times. It’s not Star Wars or Shaolin or even Midgar. Removed from the alchemical magic of Persona 4, I confess that I cannot truly care about the trials and tribulations of this group of friends; stripped of the constant tiny decision-making so important to that game, tough guy Kanji seems dour and angry, Teddy and Yosuke feel like smartphone-RPG detritus, and the demure Yukiko who once so beguiled my protagonist and in whose embrace I spent a many-splendored year feels as paper-light as, well, any other “demure girl” archetype one might find in a videogame. The game is committed to telling a story but not committed to the characters within it, which, in the case of Persona 4, leaves you with damn near nothing. Similarly, that sparkling relish with which Persona 4 shuttled the player through menus, maximizing each stat with a show-choir flourish, here becomes something a little listless and muddled. When you realize that you have to exit Free Play mode to go buy an item to then go back to Free Play mode to equip the item to get enough points to get a passing grade on a track, you will sigh mightily upon your little Vita.

But wipe that fog off the glass to get a look at what’s underneath: the actual dancing here is intoxicating to play, to look at, and to listen to. Meguro’s fresh, chintzy compositions are all accounted for, but so are remixes from a murderer’s row of J-pop producers, and as someone who finds J-pop more interesting as a musical influence than something to wade through—shout out to Grimes, Friendzone, Baths, etc.—it’s an intoxicating survey. “Your Affection” is biomechanically enhanced into a thudding EDM fantasia by Daisuke Asakura, and “Pursuing My True Self” is melted out into a frankly insane low-tempo workout by Shinichi Osawa. Other game composers, including Silent Hill’s legendary Akira Yamaoka, pop by, as does the Japanese dance auteur Tetsuyo Komura, whose involvement is a coup on par with, say, securing a Yeezy verse for a Madden game.

the actual dancing here is intoxicating to play, to look at, and to listen to

The accompanying dances are surprisingly traditional—here’s Teddy doing a straight-up Charleston to pattering, barely rhythmic synth drops—but presented across the Vita’s screen with the endless colorful invention of a great anime credits sequence. Even the actual interface through which the player performs the moves—with buttons flying out of the center and toward their actual placement on the console—feels like a tribute to its wide-angle screen. As the game scopes ever-upward in difficulty, it can only be played with a glazed, bullet-hell stare at the exact center of the image, where Rise is hop-stepping while dressed as a French maid. (Pervy Persona fans, of which there are many, will be delighted by the game’s many costumes.) The rest, blissfully, is rhythm. All of which leaves Dancing All Night as a rare mix: at once a good dancing game, a bad Persona game, and a Vita game. The original Persona 4’s story revolved around rescuing various beautiful teens from a hell hiding behind their TV screens, and, while I played it for the long haul, bypassing a couple of easier endings to ensure everyone lived happily ever after, at this point I’m not so sure I succeeded. They’re still grimacing behind the glass, dying to entertain me. I am duly entertained, but for their sake, I’m also ready to let go.