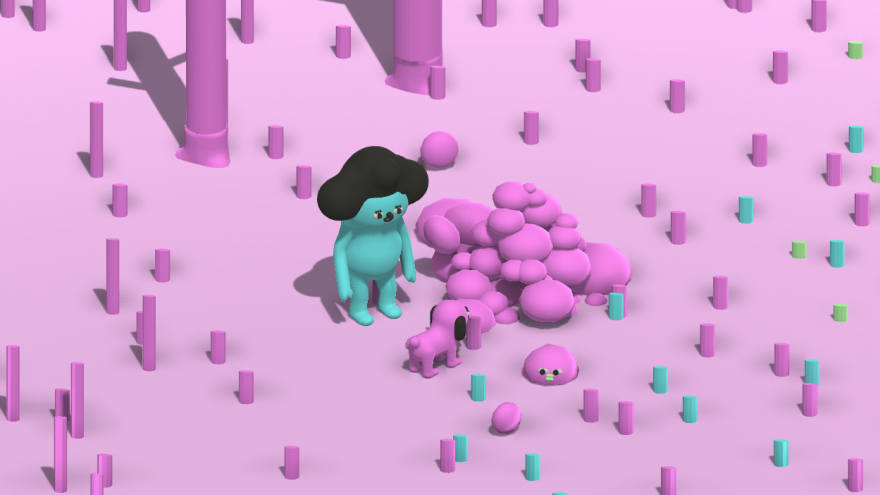 Julian Glander doesn’t need to glamour you with guns, collectables, obstacles, death, or sex. He has the weather, a lovely pink dog, and rocks for you to kick around. The vibrantly colored world of Lovely Weather We’re Having doesn’t take you back to a specific time necessarily, but to a mind set, when the world seemed bigger and brighter and more mystifying. Though you can cast Lovely Weather under of the wide net of an “exploration game,” it focuses on a more organic discovery instead of the forward, chronological beats of a walking simulator. By mimicking the same forecast as the one outside your window, Lovely Weather creates an abstract experience with direct parallels. In it, you survey the twists and turns of the world’s inhabitants rather than just the environment itself.

You can vote for Lovely Weather We’re Having on Steam Greenlight and/or visit the official website.

KS: Why make a game about going outdoors? I’m sure the irony isn’t lost on you, but what do you hope to achieve specifically?

There’s a huge disconnect between our platonic idea of “outside” and what’s actually out there. We think about tranquility, oneness with nature, new experiences. In reality it’s mostly cars, and harassment, and people trying to sell you stuff, and bugs crawling on you. So, Lovely Weather We’re Having is sort of the heightened fantasy version of going outside.

A lot of games are designed around this cycle of conflict > resolution > conflict. I have enough of that in my real life, so when I play games I don’t really get anything out of accomplishing tasks or winning things. In my opinion, it’s more appealing to move around a space and see what’s up, on your own terms.

I got a really nice message from a girl who said she used my first game to calm her down when she would start having panic attacks in public. That really drove this one forward.

KS: Do you have any favorite or most influential moments from being outdoors?

Not necessarily cherished moments, but these are some different moods and weather vibes that keep coming to my mind:

KS: How do the weather systems work in the game?

Long answer: the program grabs a rough location from your computer (within a few miles, nothing too personal), and checks that against the OpenWeatherMap API which throws back a big pile of data. The main variables are temperature, time of day, cloud coverage, and precipitation. That affects the appearance and sound of the environment, as well as the mood of the NPC’s and the conversations they want to have.

KS: How does the weather affect you personally? What’s your favorite kind of weather? What about the characters in the game?

As it happens, today is the first time all year I can put on a huge sweater, so I’m really pumped up. It’s so corny but nothing beats the beginning of Fall: drinking coffee, reading in a cemetery, listening to Belle and Sebastian. It reminds me of the start of a school year, the air of possibility (before everything goes wrong).

Even though they’re not necessarily human, the characters in the game are affected in the same way. Some of them are tired at night, some of them want to party, and some of them think that’s the right time of day to divulge their darkest secrets to you. Exploring these characters is a pretty central part of the game, but I should emphasize that there aren’t really any mysteries to unlock or goals to accomplish— at least not any that the the game rewards you for.

It’s a cool challenge to write these characters, knowing that they’re non-linear and everyone will explore them in a different way. But it’s the same when you get to know a person in real life, right? We hardly ever discover each other chronologically.

KS: Do you think people have lost touch with natural cycles like weather?

I hadn’t thought about that. Our relationship with weather is certainly changing. When we make small talk, the weather is a neutral, lowest-common-denominator basis for conversation. But with the climate crisis, even saying “sure is hot for this time of year” is a bit politically charged, and it hints at the really gloomy anxiety that we’ll be underwater in a few decades. Yikes.