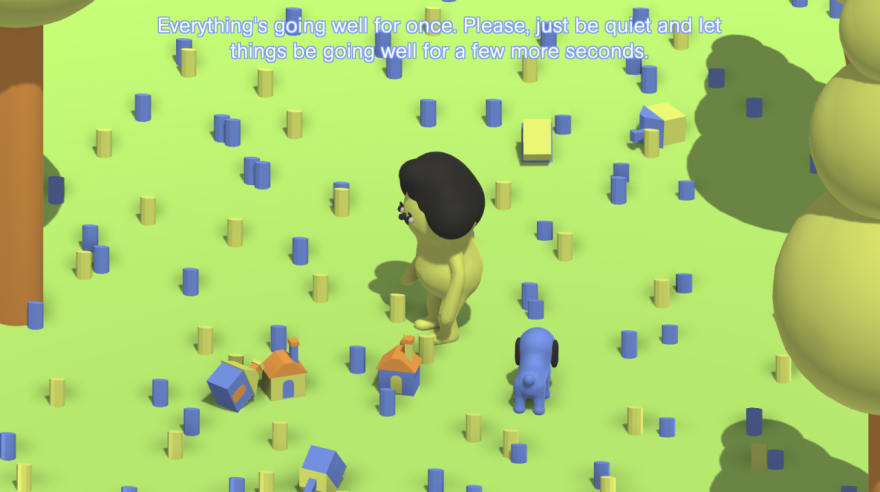 I forgot my keys in grade nine. Without a local haunt to hang out in or a nearby relative, without cellphones catching on as commonplace to see who else was around, I sat by a large tree that grew right on the property line at the end of the front yard. I sat there and read some math exercises, until a light rain began and decided that I should spare the sheets of paper a dampness I couldn’t spare myself from. A woman I didn’t recognize passed by and glanced over as I slumped with my coat and bags. She asked if I was alright, I told her I was just locked out. “Damn girl,” she said, “you must be cold!” At this point in time I had a long paintbrush of hair that I thought was an attractive way to be a defiant teenager. In her defense, new neighbors often mistook me for a young woman as well.

a simulation of being locked out of the house

It rained a few days ago, early in the morning, a light drizzle just like that day. I sprang out of bed and opened Steam, because, unlike the time when I was locked out of the house in the real world, I was hoping for a rainy day so I could get locked out in the virtual. Julian Glander’s Lovely Weather We’re Having (Glander made that fun interactive Celestial Shores video) is a small digital village that synchronizes with the local weather—it’s a simulation of being locked out of the house, and accurate to the real deal, presents you with the confrontation of small talk.

Toronto has been uncharacteristically lovely for most of November, which somehow became a pain in my ass in reviewing a videogame. Every visit to Glander’s world was nearly identical. A cool teen hangs out against the wall. A caterpillar hovers around its tiny town. A computer person asks you to guess a number. The party pig keeps it real in the pond. One villager, a multicoloured bee hive with googly eyes, wishes it was just a few degrees warmer, but it is fall now, hive dude, and it can’t be summer forever.

Some villagers seem to pop in and out depending on the time of day, and some conversation trees do seem to change in the sunshine or the rain. A talking rock who is generally a curmudgeon finally opened up to me to air about its life anxieties during the downpour. There is talk of a monster in the mountains, a conspiracy supported by a lone door sticking out of the rockface. At night no one is around, other than you and your little puppy, because I suppose you still haven’t found those keys. Everyone else is sound asleep.

Glander’s world is pretty. Everything is made of marshmallows. The colors of the soil look like mirrors to the hue of a sun you never see. You can have a conversation with a bundle of grapes about the strange glow of the tall grass, regarding if it is magic or weird science. The roaming cast are a combination between Patrick Kyle’s shapes and Aardman’s Rex the Runt. Walking through or over some parts of nature make synthetic drum blips akin to the musical geography of Proteus, though that symphony seems less of a priority to Lovely Weather and more of a function of the strange toy it happens to be. This game is an action-figure playset for the zine scene. We don’t have a He-Man doll fighting the Joker, we have wads of clay shaped like Ray Smuckles asking Hopey Glass if this hat makes him look like a clown.

Lovely Weather is Animal Crossing without all the stuff

The weather, the concept that is the game’s biggest ambitions, is interesting, but instead of making me connect the virtual snowglobe to the atmosphere outside my window I only end up contrasting. It was sunny and warm throughout the week, which the game knew, but it was also windy with leaves strewn everywhere, while the game was devoid of litter. When the snowy seasons begin, I will check back in to see if the magical white specks stir up hopeful sentimentalities in me, and it probably will (I am a big sucker when it comes to Banjo-Kazooie’s Freezeezy Peak), but it won’t remind me of the grey slush mountains that plague my hometown throughout the season. Lovely Weather We’re Having is the idyllic cartoon version of whatever is happening outside, the variation where you can always hang out amidst it. Only details are ugly.

Gavin Volure, played by Steve Martin on 30 Rock, once called Toronto “New York without all the stuff.” Lovely Weather is Animal Crossing without all the stuff. There’s no consequences for your actions or chores to complete. You can kick all of the caterpillar’s tiny homes into the ocean and topple all of the trees and the world will reset, you still locked out, the next time you play. Change comes to the game when change comes to your clouds and sun and moon, when you hover around the tiny village making small talk, at times about the weather, but mostly quirky facetious comix-speak. And, like a sun shower, that’s nice—if small.