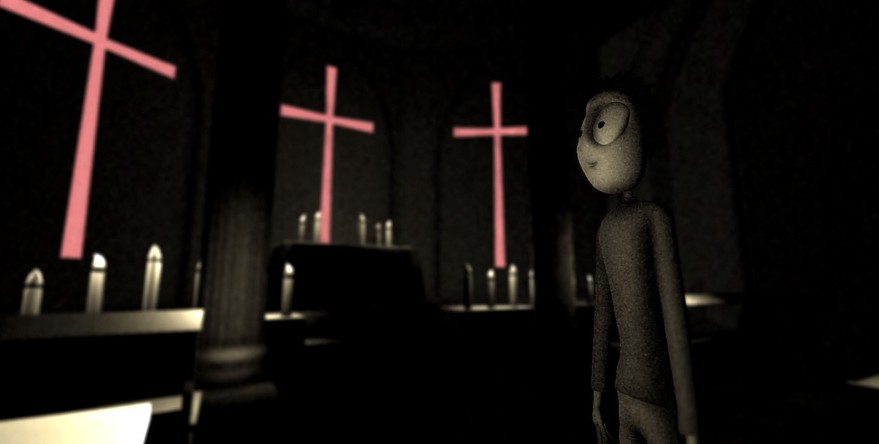 In the past decade or so, the young vampire romance genre has inspired a couple of foreign films that speak to the classic motif while also seeing beyond it’s modern trappings. Let the Right One In (2008), a Swedish title depicting a young twelve-year-old boy who winds up finding an unexpected match in a centuries old immortal child, is an earlier example of the trend. More recently, the first ever Iranian vampire movie, A Girl Walks Home Alone (2014), told a similarly unlikely but visually perfect tale between a male human and his vampire dream girl.

Game designer Kristian Kronstrand‘s Shih Ho mimics the dynamics of these moody yet sincere takes on a—by now—overtired trope. In the game, a boy finds himself seduced by “Her,” an unknown entity that seems connected to a string of murders that happened recently in his slumbering little town. Like Let the Right One In, Shih Ho comes from a Scandinavian mentality that tackles vampiric lore in a very specific way.

As The Guardian points out, “three of Scandinavia’s greatest artists, the Swedish playwright August Strindberg, his friend the Norwegian painter Edvard Munch, and the Danish director Carl Dreyer were fascinated by the subject. Virtually all Strindberg heroines are vampires. Munch’s most famous painting after The Scream is his Vampyr, while Dreyer’s Vampyr is arguably the greatest of all horror films.”

Let the Right One In carries one distinct similarity with another Swedish vampire film as well. Anders Banke’s Frostbite, set in the Arctic Circle town in Lapland, demonstrates how a vampire can move around freely in a place like Finland, where long winters leave practically no sun to worry about. Let the Right One In director Tomas Alfredson even says the claustrophobia of the small town was central to the essence of the film. Similarly, the town in Shih Ho proves to be all but empty, while the static-y art style conveys the dark and impenetrable winter.

Meanwhile, the young romance sparked in Shih Ho recalls the themes of being pushed and pulled toward good and evil. In Let the Right One In, an innocent-looking yet secretly violent boy falls for a seemingly violent vampire who is actually pretty innocent. The role reversal is also evident in Shih Ho, though in the interactive version the player must decide who he or she is willing to become.

an undercurrent theme of lacking acceptance

Mimicking the beautiful stillness that carries throughout each shot in Let the Right One In, Shih Ho rewards those who know the value of inaction. At one point, a puzzle requires the player to stop moving entirely—”give up”—before it allows her to move forward. Like the other vampire titles, an undercurrent theme of lacking acceptance and even flat out neglect from a parental figure. The kids in these movies find themselves in violent dispositions as a direct result to the brutality of the adult world running parallel to them.

Though the interactivity of Shih Ho leaves some room for an individual player’s choice, it captures that Scandinavian sensibility which just might be responsible for the recent revitalization of the young vampire romance genre. Certainly as a film, it’s left a lasting impact, which may have even crossed over to games.

You can play Shih Ho for free on Windows, Mac, and Linux here.