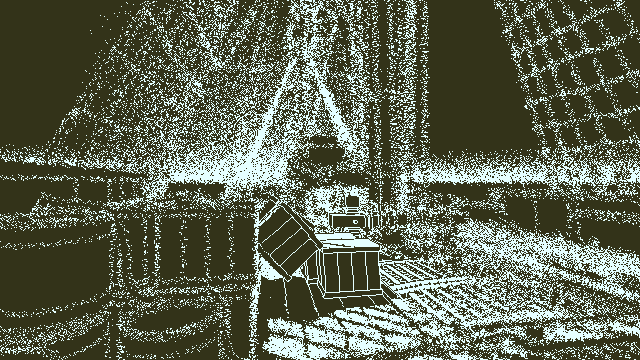 Return of the Obra Dinn is an upcoming Lucas Pope game with visuals so quietly gorgeous and ghost-like that only a haunting story about being lost at sea could match it. Pope, seemingly having observred the beautiful 8 to 16-bit games coming out over the past couple years, has decided to double down, using 1-bit graphics that recall early Macintosh visuals from Apple’s gray, boxy glory days.

Unsurprisingly this design choice has left Pope with some unique problems throughout development. In his latest blog post on TIGSource, he takes readers through one such issue step by step. After getting the uncanny sense that the art style needed a bit of a retouch, Pope decides to add an effect that would “roughen up the low-poly straight lines everywhere.” But what starts out as an innocent experiment to loosen up the style in Photoshop quickly snowballs into a litany of programming issues (imagined and real) and solutions without clear purposes. “I have been down a dark path,” he warns readers. “Let me take you there.” Yes, Mr. Pope, let us both go down this path of no return.

Of course, Photoshop is not equipped to handle 1-bit graphics. So just slapping on a warp effect erases some precious pixels, which may not be the biggest deal in other games but, as Pope says, “with the low-res visual style here, and just 1-bit to work with, each pixel is important. The ‘wireframe’ lines make lost or doubled pixels especially ugly. That leads to a rule: If we move one pixel, it shouldn’t ever overlap another pixel or leave behind a hole.”

“I have been down a dark path”

Inventing problems for himself for a feature he’s not even sure he’ll use (which, to be honest, is an activity I haven’t known many developers to be partial to), Pope goes down a maze-like path to find the answer. An answer which, as it turns out, is a 2D maze in itself. “The key is that the first pixel move has to go offscreen, leaving a hole—then another pixel can move into that spot, creating another hole—etc. Wind your way around the entire screen this way and you can move each pixel one spot and never overlap or double another pixel.”

But programming the 2D unicursal maze (a single path through without any branches or dead-ends) to shift each pixel one spot along the solution path isn’t enough either. Scaling and adding a sine wave to the track offsets “would mean shifting the white track by 0 spots, the green track by 1, the cyan by 0, the purple by -1 and the blue track by 0, roughly.” Finally, Pope appears satisfied with the effect. “There’s a nice warping which definitely makes it feel more ropey than straight low-poly shapes.” But ultimately, he decides, it’s a bit too distracting. “Maybe it’ll only be applied in the flashbacks. Maybe not. No surprise then that this rabbit hole has only dirt at the end.”

Despite the uncertainty of the effect in the actual game, Pope demonstrates the benefits of curious experiments such as these during development. He transforms one of the failed wobble effects which proved too high-frequency into a focus-blur effect. By scaling between low and high-frequency mazes based on world distance from a hand-placed focal point, he creates a depth of field effect that might be perfect to “highlight the killer/killed in each flashback.” Since Obra Dinn casts the player as the insurance adjuster who must unravel all that happened on the mysterious voyage, the distinction could help immensely. “Or not,” Pope concludes. “After all this work I’m still not sure where or if it’ll end up in the game. I really just wanted an excuse to post those maze-solving animated gifs.”

Well, we’ll leave you to it Lucas Pope, as long as we keep getting more tantalizing glimpses at The Return of Obra Dinn like these.