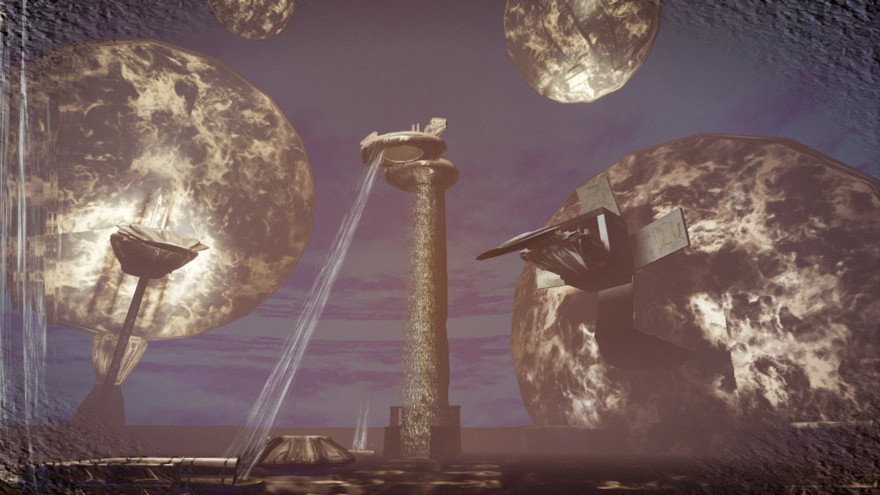 I’m always skeptical when told a videogame is “poetic.” I don’t think that poetry and videogames are incompatible; numerous hypertext poems and novels have already shown how digital texts can open up avenues for poetic exploration. But as far as descriptive terms go, “poetic” is as vague a buzzword as “cinematic” or “immersive,” more useful in cultivating an air of interest than offering genuine insight into the game. After I read Cylne’s description as “a first person surreal exploration game, in the form of a visual poems collection,” I immediately wondered what this peculiar phrasing possibly meant to communicate.

Having played the game, I’m still doubtful that “visual poems” is an apt descriptor for the game’s individual chapters, partly because Cylne is a particularly difficult game to describe. I suppose it belongs to the recently prevalent (and somewhat derisively named) “walking simulator” category. Whereas others such as Gone Home, The Path, The Stanley Parable, or Dear Esther ground their relatively limited interaction with elements of story or purpose, Cylne strips away any tangible pretenses of narrative or player impetus.

Each of the five chapters offer little more than surreal landscapes to explore. Massive boulders decorated with glowing glyphs guard an expanse of desert flanked by two titanic chains. Twisting spires of bone or rock form makeshift bridges and ladders. Levitating doorframes suggest portals to other worlds. All of these environments host equally enigmatic soundscapes populated by the echoes of mournful guitars, clanging bells, crackling fires, the clank of metal of solid ground. Progress, if indeed “progress” is the correct term, only occurs after walking to (or in some cases looking at) certain objects. These entities either cause the environment to change, thereby opening up new avenues to explore, or they transport the player to a new area.

This reduction of gameplay to its basest of elements makes Cylne an alienating experience. It renders the most basic concept of interaction unfamiliar by dropping the player in a world with its own rules, with its own sense of twisted dream-logic. Walking across an ashen wasteland can turn into levitating high above the ground, then into swimming outside the world itself, all with little or no warning. As I played, I thought of Ben Marcus’ The Age of Wire and String, a novel/short story collection/encyclopedia about a world built from the detritus of structures both physical and social. Marcus, much like Cylne, places his reader within an unfamiliar world made from familiar parts, and only by sifting the wreckage of language can the reader make sense of the world she glimpses on the page. Cylne asks something similar of its player: a willingness to abandon assumed operational functions to embrace alternate paths to meaning.

Only by sifting the wreckage of language can the reader make sense of the world.

Like the surrealists that inspired it, Cylne attempts to unify the waking tangible world (here recognizable in the simplicity of movement controls) with the abstract movements of the unconscious (here again the apparent dreamscapes and bizarre interactions) in a way to hunt for an ideal mode of expression. The surrealisms of Dalí and Ernst rely heavily on juxtaposition of familiar objects presented in unfamiliar ways—for instance, combining object and animal or confusing environment and perspective—to reproduce the functional mysteries of thought. Cylne works with juxtaposition and constant misdirection as well, measuring misdirection against revelation and constantly asking the player to come to her own conclusions about why the different worlds exist in their current states.

Cylne breaks into the more active aspects of surrealism as well. In his “Surrealist Manifesto,” André Breton theorized that the best way surrealism could access the complexities of thought was through “pure psychic automatism,” a way of allowing the artist to create from (or to simulate) randomness and error as manifestations of the unconscious. Cylne certainly has the appearance of randomness in that the environment changes in unexpected ways by responding to the player’s minimal actions. The dreamscapes seemingly create themselves as the player explores them, and the results reveal an unexpected lucidity surrounding the physics that govern the world.

This revelation lies at the heart of Cylne’s surrealism and its promises of accessing some sort of digital unconscious. The comparisons the game invites with other artists may be a bit too bold, however, given that it never strives to be about more than the game itself. Surrealism, having splintered from the politically charged Dada movement, speaks as much about the culture of its day—the disillusionment after the first World War, the role of art in the age of machinery, the advances in science and shifting social structures—as it does its formal experiments. Cylne remains content to confine its exploration to digital spaces, rarely attempting to use the text to say anything about the world outside it.

These criticisms, though, are relatively insignificant, especially since the game’s aesthetics make for some uniquely beautiful environments as well as some insightful moments of clarity about the nature of play. I still don’t know if that makes the game “poetic,” but to be honest, I don’t think it matters all that much. If games have dreams I’d wager they would look something like Cylne.