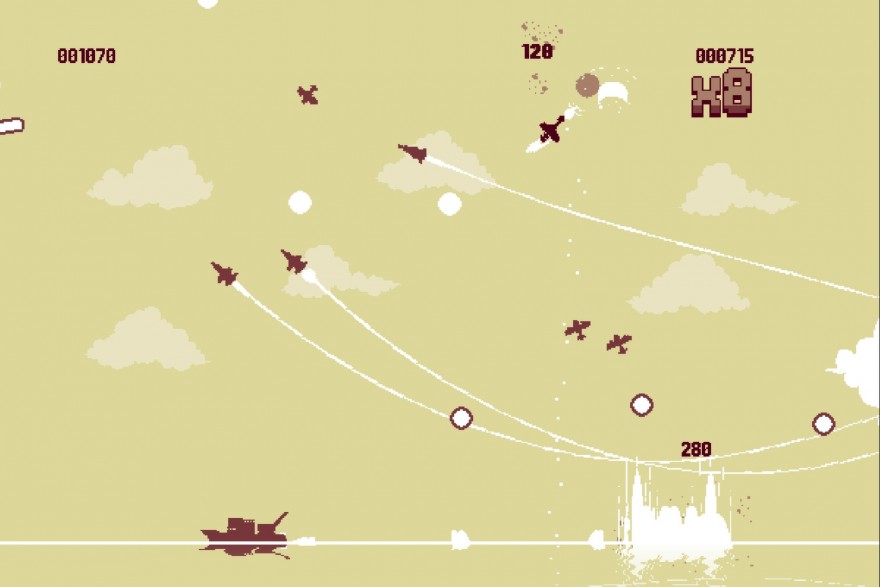 In an arcade, everything is present tense. The Tetris blocks keep falling, the space invaders shuffle towards earth with menace and purpose, and it is always Burger Time. There is no pausing, no letting go of the controls, no recently discovered save file from 2010 (58% completion). Unplug a machine and history is erased, or just put in another quarter and rewrite it. Games end. Games start.

Luftrausers is ceaseless motion. A silhouette of a small 2D plane is launched over the sea and set upon by small fighters. Then gunboats start sniping from the water, which are a prelude to large, imposing battleships that turn the screen into a bullet hell fever dream. By the time I get shot down, the screen is laced with bullets, and skilled enemy aces pirouette around the wreckage. Like everything else Vlambeer has done—Super Crate Box, Ridiculous Fishing, Serious Sam: The Random Encounter—the game is a polished exercise in escalating chaos.

If arcades hadn’t died out with VHS tapes, Luftrausers would be the cabinet in the corner with the worn joystick and buttons smoothed by thousands of taps. Vlambeer are one of the best in the New Arcade movement, and they pay homage to the history they’re indebted to. There’s the faux 4-colour Gameboy palette, and the simple, stark 2D pixel design by Roy Nathan DeGroot and Paul Veer that makes the action easy to read, even as the plane stalls and nosedives quickly to avoid a submarine missile.

Before each round, the player is allowed to pick a weapon, a body, and an engine, each with different abilities and perks. One engine gives speed in exchange for poor turning, one body lets the plane collide into enemy planes without taking damage, but at the expense of health. The guns all seem like something out of an early NES shooter like Contra. There’s the gun that shoots out a solid laser, another that sprays five bullets at a time. Vlambeer takes the look and feel of older games, but makes use of modern design. Health regenerates when not firing weapons, for example. And the developers take the focus off of pure score climbing by setting little mini-objectives (destroy a submarine, kill 5 fighter jets while falling) that unlock new parts.

But Luftrausers’ main pull remains that score-attack—again, those arcade roots—but it’s within that system that the game has a very narrow, specific problem. The way scoring works in the game is that each enemy has a fixed point value and killing enemies in quick succession makes a multiplier go up in value, raising the value of every kill after that. If a kill isn’t made fast enough, the multiplier resets. This means that I have to destroy a lot of low-level planes to work up the multiplier while simultaneously wearing down larger enemies so that they can be effortlessly taken down for huge points when the multiplier is at its highest. The best opportunity to score is early on, because there are a lot of weak enemies and it’s easier to chain things together. Once that initial chain is lost, though, there are fewer weak enemies that work as connective tissue in combos, and the playing field is filled with large enemies that soak damage and don’t die quickly enough to get anything going.

A good arcade-style score-based game should leave the door open for miracles.

The action doesn’t stop—there are still bullets everywhere and enemies moving around the screen—but it’s hard enough to pick up the thread that it kills the motivation to keep going. Even tackling a large enemy won’t net enough points on its own. What’s the point? A good arcade-style score-based game should demand perfection but leave the door open for miracles. Like any other element in a game, score contributes to its meter, its feel, its momentum. Luftrausers is still a good game, but there is something missing here. It is a symphony with the wrong conductor. A football game with no referee. Luftrausers is an arcade game that is not in the present tense.