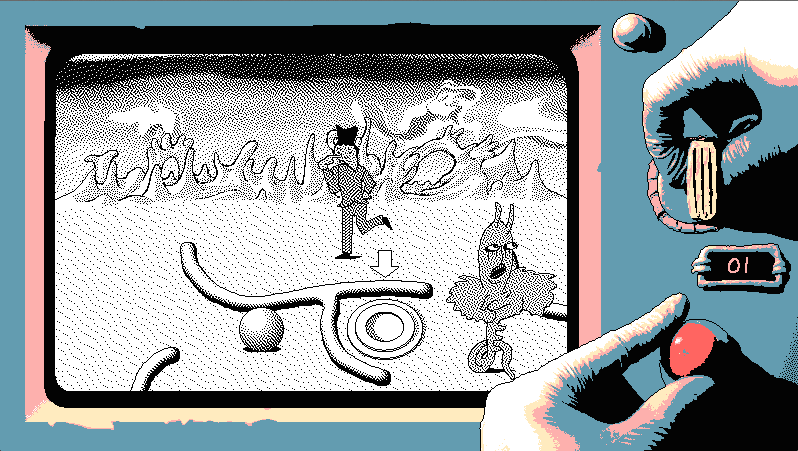 What can’t Mason Lindroth do with his hands, some clay, and a computer? Silly question: the answer is nothing, it seems. As expected, Lindroth’s latest interactive peculiarity stands out even among the other 2,538 entries to Ludum Dare 30.

The “Connected Worlds” theme of the game jam suited him well, encouraging him to bring together all the hallmarks of his signature style into a single game called Lullaby. That includes his recognizable dotty black-and-white visuals, the strange clay creatures from Weird Egg & Crushing Finger, the dance parties in Journaliére, and the sprites of real hands from Beachcomber.

as mesmerising as animated abstract art tends to be

Playing with virtual analog controls operated by a pair of gloved hands, you flick through the channels on a simple device that appears to be the offspring of an Etch-a-Sketch and a portable TV from the ’80s. The 25 channels available vary between a few different types, not all of them are interactive but are nonetheless all portals into Lindroth’s surreal and strange broadcast.

Some channels resemble a more artistic recreation of TV noise with swirling patterns drifting across the screen. They’re as mesmerising as animated abstract art tends to be, but lack the character of the channels dedicated to Lindroth’s hand-drawn people kicking their knees up and bopping along to music you can’t quite hear. One channel plays just like the top-down driving scenes in Journaliére, except there’s nowhere to go on its wiggly lone road, and nothing else to do except try to encourage the other vehicles to a round of bumper cars by barging into them.

The channels that most closely resemble a traditional game involve dribbling a ball through a course and into a hole. In these, you push the ball with the lower mandibles of a creature that I can only describe as a gnarled musical note combined with the neck frill of the spitting dilophosaurus in Jurassic Park.

This task is made tougher by the toe-tapping clowns and estranged cheerleading aliens that populate the track. Imagine trying to play crazy golf in another dimension where it’s custom practice for folk to dance upon the course. Mind you, they’re as endearing as they are maddening, dressed up in gigantic jumpers, party hats, and puffy outfits.

Once you have rolled the ball into the hole, that channel stays locked that way even after changing the channel. This becomes a pattern that suggests something will happen once all the balls are aligned. That much is true, but you’ll have to be attentive if you wish to see it.

Surprisingly, considering its seemingly endless playfulness, Lullaby does have an ending. You’ll come across it eventually by falling right into its perfectly set-up trap. This is Lindroth’s most playful game so far as it speaks so fluently to our curiosities. In particular: what’s on the other channel? You really don’t need more of an excuse than that to slip further into Lindroth’s fantastic imaginarium.

You can play Lullaby in your browser. Its Ludum Dare page is here.