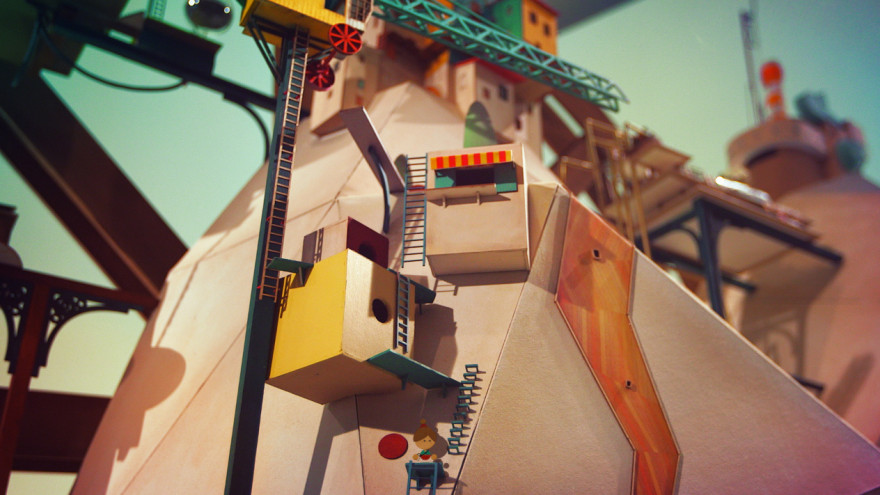 About a third of the way into Lumino City, you set aside your curiously slowpoked search for your kidnapped grandfather to play messenger for two pairs of neighbors who live in cliffside apartments. Rather than intrude upon them with your drama or even comment on the absurdity of their domiciles, up and down you climb to relay messages for people who could lean outside and talk to one another. If they wanted to.

In true adventure-game fashion, you want them to help you with something to further your own agenda (in this case, to operate a crane), so up you go to tell the baker that his neighbor three ladders down wants a bun as payment for helping build his shop. But you can’t even ask, since the shopkeep has problems of his own: His inventory system is all fudged up so would you mind helping him first? Once you get that squared away, you have to help the other neighbors: Tell the lady two ladders down that the guy another ladder down needs to borrow her can opener to eat some food. She won’t do it without a guarantee that he won’t lose it.

So down you go, getting his word. And up you go, assuring her. Then down you go again, with the can opener. Finally, up you go, returning it.

You get the crane running. You leave the neighbors behind, presumably never to speak to one another again.

It’s that latter thought that Lumino City is indirectly exploring: What is the world like if we don’t communicate with one another?

“But wait,” I’m sure you’re likely thinking. “This is no different than any of the other roundabout interactions you have in most point-and-click games. Aren’t you just thinking way too much?”

It’s possible, and I thought that too until the above setpiece. The vast majority of your exchanges in Lumino City are like this —transactional and fractured, but wholly critical. There’s the man who forgot his wife’s anniversary (and pants), and he needs you to learn their song on guitar to soothe her sour mood. There’s the lonely ship captain who misses not human companionship but the ocean blue. And, of course, there’s your character, Lumi. As you progress and meet a handful of other characters she feels comfortable opening up to, there’s a revelation: You don’t even know your own grandfather’s real name.

The world is beautiful and important, not its inhabitants. They’re just things to ask to do other things.

I’m paraphrasing, but Lumi shrugs this off as no biggie: “He just always wanted me to call him Granddad.” Stranger still, everyone else in Lumino City knows him by another name. A code name: “The handyman.” He gets nabbed in the beginning of the game while telling you a story, and without dispensing spoilers, you find him in the end but you never hear the rest. It’s curtains down and you never get to to hear the point. You never get to deepen that relationship.

Granted, a little girl freaking the fuck out over her missing carekeeper is tonally out of whack with the game’s storybook aesthetic and, anyway: look at this game. It’s truly gorgeous,  but what’s interesting about it is the contrast it marks. The world is beautiful and important, not its inhabitants. To wit, the four people you help up above? You need them, literally, only as a brute mass to pull the serpentine lawnmower-style cord on a massive crane. They don’t even ask why you need their help. They’re just things to ask to do other things.

Funnier still, adventure games are always about things. Inventory. Clicking on everything everywhere not bolted down, then the bolts, because you might need them later. But Lumino City doesn’t necessitate bringing things with you, it’s about getting things working. Or, perhaps more aptly, trying to make things work. Putting gears in the proper sequence. Constructing homemade batteries. Assembling a darkroom.

Then again, it’s not a huge surprise that Lumino City is about stuff: That’s all it is. Dispensing with pixels first, Lumino City was almost exclusively built by integrating physical objects into the game. The designers literally constructed a world out of cardboard, glue, and miniature electric motors. You can see nails in wood. Fabric with actual wrinkles. All I could think while playing was: Pepperidge Farm.

Well that, and how striking the camera moves are. Because you are navigating a man-made physical space that was captured using a specialized camera rig, moving around the space feels more like you’re discovering something new. Compare this to, say, Skyrim, which gives you a thunder of war drums and onscreen text acknowledging “Yeah, you found someplace new,” or even what we know of  No Man’s Sky, which cheapens exploration further by doing that, then ascribing brave new frontiers’ discovery to screen names.

Here, the spirit of splashy ‘60s opening credits in movies is applied to that typically fussed-over but not ruminated-upon aspect of games: the camera. That is, movie credits don’t have to be fun or interesting, but The Pink Panther and all those old James Bond movies sure are more memorable because of them, yes?

In Lumino City, it’s theatrical when you click around even to the side of a building and there’s a big push and zoom to reveal it. It never gets old. Why? My best guess is because, unlike Fez —which has the closest approximation to this sort of perspective shifting as a core principle —this is a world that humans built first with their hands, not hands dragging and clicking things attached to computers. You have to make sure things like your shot compositions and framing are solid when you’re using real cameras on real scenery and sets.

And so it’s a strange mix. Lumino City is a real world filled with relationships as thin as its papercraft inhabitants. Whether intentional or not, it seems to be the focus, given that there’s not much in the way of “adventure” in this point-and-click adventure. You roam a path and rarely if ever see the same characters more than once. Is this, then, largely a showcase for the miniatures and tiny art? A comment on how we objectify each other in getting what we want from one another? I suspect it’s somewhere in between: Another one of those bedtime stories that, when you stop to think about it later, is actually kinda grim.