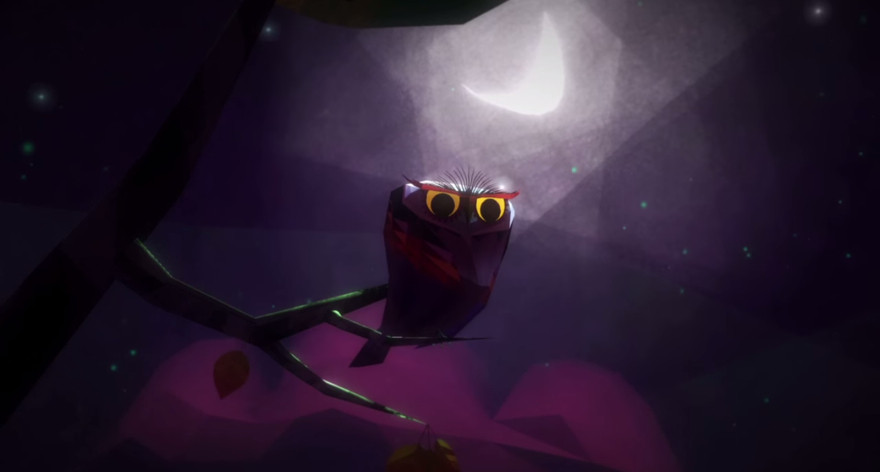 These birds are not angry. Even though an owl persuaded a young bird to eat the last bit of the moon, the birds in Luna aren’t angry. Irked, maybe. But not angry.

This was a bad summer for owls, those most unfairly maligned of birds. In July oui chun wen released a series of Angry Owl games: Angry Owl, Angry Owl Halloween, Angry Owl Space, and Angry Owl Mid-Autumn. In the Angry Owl games, the titular angry owl flies about, satisfies his rapacious appetite for apples or pumpkins or whatever the tie-in object may be. A month earlier, ASUS released the Strix Pro headset. Its headphones were designed to look like intensely angry owl eyes. At this very moment, you are only a click away from multiple angry owl meme generators.

Luna is not a corrective to the portrayal of owls as angry but it is a game concerned with anger and owls. Described as a “tactile puzzle game” in its teaser, Luna is structured in a way that encourages problem solving as opposed to violence. Much as the Sunday crossword may make you wish otherwise, you can’t shoot your way out of a puzzle. This is not an accident. As Funomena’s Robin Hunicke told Kotaku, “In a lot of games if you make a mistake or are the victim of a mistake that’s unfair, you get revenge but that’s not how it works in real life.” Anger and its manifestations are of limited use, even for owls.

And who could be angry in Luna’s world? Its origami-like aesthetic makes for a real sense of depth. Its teaser, which gives no hint at how the game will be played, is made up of a series of vignettes. Hunicke describes Luna as a fable. With its soothing qualities, its teaser brings to mind a less plot-driven children’s classic: Goodnight Moon. In a world this beautiful, even the beleaguered owl can avoid a bad rap.