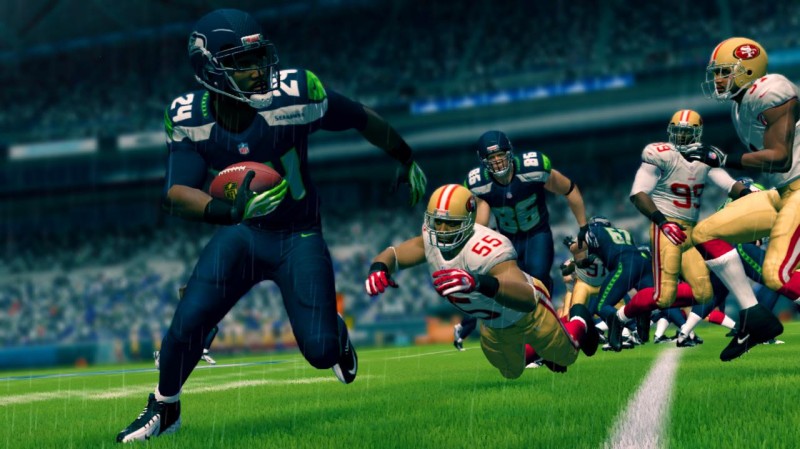 When I first graduated college in 2003, and lived back home with my parents for a while, I used to frequent a restaurant called Super China Buffet in Worcester, Massachusetts. Inside was an enormous dining room, always mostly empty, with maybe ten full buffet tables of steaming hot food. They offered a full range of sticky-sweet staples of americanized Chinese food: garden variety Sesame Chicken and General Tzo’s next to a plethora of noodle dishes and even some fresh fruit. No single menu item was ever spectacular, but that was never the point. Super China Buffet was about value, about maximizing caloric intake per dollar. I usually left the restaurant feeling really, disgustingly full.
Were all of the features in Madden NFL 25 outstanding, there would be more to celebrate. But the truth is these features are all good, but unremarkable.

Madden NFL 25 is the Super China Buffet of videogames.

It is, first off, bloated. Even as a fairly literate sports videogame player, I found myself overwhelmed by the game’s main menu. There’s an expanded Connected Career mode that you can play online or off, there’s the deck-building-cum-franchise Ultimate Team mode, there’s ranked Head to Head play, there’s local quick play, and all of these run deep in terms of customization and features. I whiled away a few hours building my Madden: The Gathering deck for Ultimate Team, playing a few online games to earn coins but spending most of the time posting and bidding on cards at the built-in auction house. It’s all the wondrous joy of eBay, with that unique thrill that comes from satiating capital desire by way of a bargain. This is not so unlike the impetus that drives a car to Super China Buffet.

Were all, most, or even just some of the gratuitous features in Madden NFL 25 outstanding, there would be more to celebrate in this silver anniversary of our marriage as player and game. But the truth is these features are all good, but unremarkable.

At the heart of the whole Madden experience is the simulation of the game on the field. That remains fine, just fine. It feels like what I imagine controlling an NFL game on TV should feel like. This year, the EA marketers are emphasizing the newly tuned running engine, and they are right to do so. It feels responsive yet weighty. I can recognize when I’ve generated some momentum, and while sometimes the character movements seem superhuman—like a sideways juke that sends my player nearly 10 yards laterally—most of the time the running game feels more rooted by Newtonian axioms than ever before. Similarly, the graphical statistical overlays, the introductory sequences, the between play camera movements, and even the streamed in-game advertising all faithfully mirror the sport on television.

But so much of the game, despite being 25 years old, feels dated and unremarkable. The character models, though fine during the action of the game, look unconvincing and awkward during camera cuts between plays. The coaches especially look like glassy faced hunchbacks, as though the model designed to look good under pads was just copied for them. The computer AI, which accounts for a lot of the game considering football is played 11 on 11, is decent, but still makes lots of mistakes. Blocking, in particular, is clumsy and unintelligent. In addition to 25 years of features, they’ve left 25 years of awkwardness in the game as well.

Each year it represents a sum of all iterations, a remarkable body of game design work.

As likely the last Madden game of this console generation, this year’s iteration is peppered with callbacks to the quarter-century history of the game. Loading screens feature blurbs and screenshots of the many different versions of the game, often highlighting which unique “back of the box” feature was the revolutionary change being marketed that year. As someone who has played almost all, and bought most of these games over the years, it does make for nice moments of nostalgia as I wait. No doubt the designers hoped that the romp down memory lane would compel players to wonder at just how much has changed over all this time.

I played plenty of Madden NFL 2004 ten years ago, probably after trips to Super China Buffet. I remember sinking hours into the revolutionary new “Owner Mode” that let me change prices on hot dogs, relocate a team, and upgrade my stadium, a feature that was revamped for the newest installation of the game. I marveled at the depth, at just how deep the world of the NFL had become. Madden as a videogame franchise has grown significantly over the past 25 years. Each year it represents a sum of all iterations, a remarkable body of game design work.

But videogames have also had a coming of age. Many of us are no longer satisfied just pulling the trigger; we ask, to what end? With our demands that videogames be considered as important cultural products comes a renewed effort to dissect them, to read the games as the meaningful texts we argue them into being. Sports enjoyed a similar transition, from banality to academic relevance, over the last century in America, much like videogames themselves. Sports videogames, though decidedly different from many other genres of videogame, are neither beyond nor below critical analysis. And so we ought not brush aside Madden NFL 25 as “just a sports videogame,” nor hold it to any less rigorous of a standard than we would games such as Bioshock Infinite or The Castle Doctrine.

I want a sports videogame that feels complete, and not a grab bag of whatever is available.

And so here is the rub: Madden NFL 25 meets and exceeds superficial expectations for a football videogame. It’s engaging, deep, televisually accurate, and at times exciting, and I’ll likely keep playing it, especially as the NFL season picks up steam. But what I really want is cohesion. I want a sports videogame that feels complete, and not a grab bag of whatever is available. Madden NFL 25 is an all you can eat buffet, overwhelming you with choice, and underwhelming you with quality and experience. This is not a problem that only Madden NFL 25 has. Most sports videogames suffer from design by addition, catering to the quintessentially American desire for more and for bigger, for the Super Size and for Costco, for the Big Gulp and for Chevy Suburbans, and all for less.

My dormant inner 22 year-old—that same grinning idiot who ten years ago would waddle out of the Super China Buffet with pride—loves the excess of Madden NFL 25. And yet, when I power down the Xbox, and scurry upstairs to check on my sweetly snoring toddler son, and contest for bed space with my sprawled out partner, I’m left with an uneasy feeling, like I’ve stuffed myself silly. Growing up, I’ve learned these past ten years, is about managing priorities. It’s time for Madden’s developers to make some decisions.