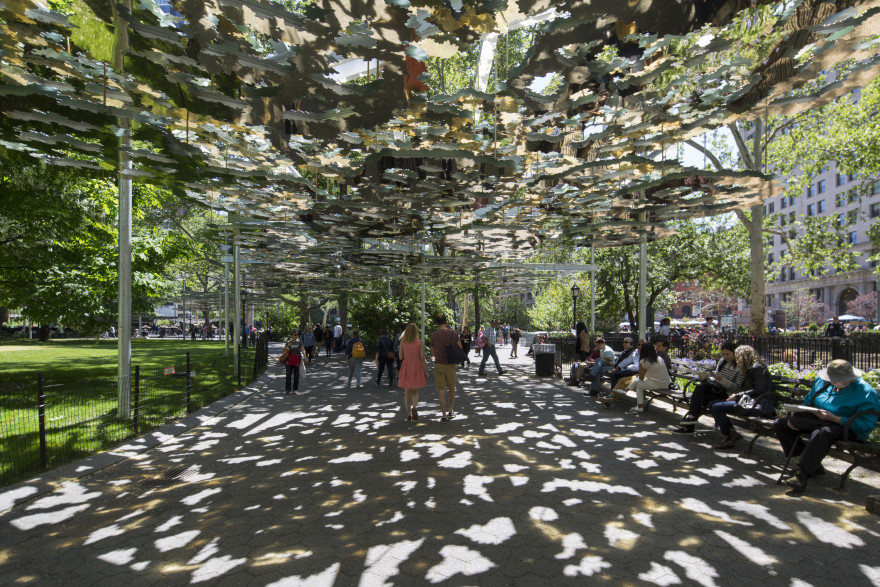 It’s June. The trees are in full bloom. That can only mean one thing: it’s time to start worrying about this foliage’s looming disappearance.

This is particularly the case in New York’s Madison Square Park, where the park conservancy’s contemporary art program recently unveiled Fata Morgana, a 500-foot-long installation by artist Teresita Fernández. The polished metal sculpture is perforated, achieving the appearance of leaves that have been fused together. Indeed, it serves the function of a high-tech arboretum, providing a measure of shade while allowing light to glimmer through. A local resident complained to DNAinfo New York that it “looks like they’re building a shelter,” but isn’t that the point of foliage? Rendering an arboreal canopy out of metal ought not necessary change its social function.

Fata Morgana takes its name from a form of mirage where objects appear to float above the horizon. To wit, its reflections make it hard to determine where, exactly, light is coming from. The line between ground and sky becomes blurry. Yet that is not the only way it subverts our expectation of where things would be.

“My concept,” Fernández explains, “was to invert the traditional notion of outdoor sculpture by addressing all of the active walkways of the Park rather than setting down a sculptural element in the Park’s center.” This concept, which harkens back to Christo and Jeanne-Claude’s 2005 Central Park installation, The Gates, reframes the idea of what it means to center art. Fata Morgana argues that art shouldn’t be at the center of spaces so much as it should be at the center of our experiences.

In New York City, trees are annually denuded. Fata Morgana, which is scheduled to be on display “through winter 2015-16,” will outlast most of its traditional brethren. Consider it one last mirage from a project that reflects and twists nature at every turn.