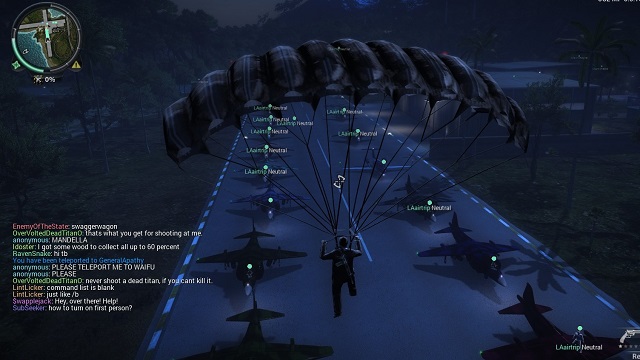 Just Cause 2 exists on the periphery for a lot people. It’s a three-year-old game that, similar to Minecraft or Skyrim, you tend to hear about more than actually play. Its community gets up to all sorts of crazy shit but it’s a small minority that actually gets to participate in any of the group formation skydives, land/sea/air races, or road trip with hundreds of other Ricos. The barrier to entry is especially high for Just Cause 2 because the game doesn’t support an online mode. The multiplayer aspect of the game is entirely controlled by a mod that, like some sort of digital Whack-a-Mole, has been popping in and out of public beta for more than a year. No longer!

The developers are planning to release it onto Steam by the end of this year, where it will work with friend lists, have its own community workshop, and pull all the other tricks that come with Steam integration. In a way, what happened to Avalanche Studios’ Just Cause 2 is what Rockstar wants to happen with GTA V’s so-far lackluster multiplayer. With the recent unveiling of GTA V‘s content creator, it seems like Rockstar is just handing the tools over to their players and saying “Here, find a way to make it more fun.” Avalanche didn’t even have to ask.