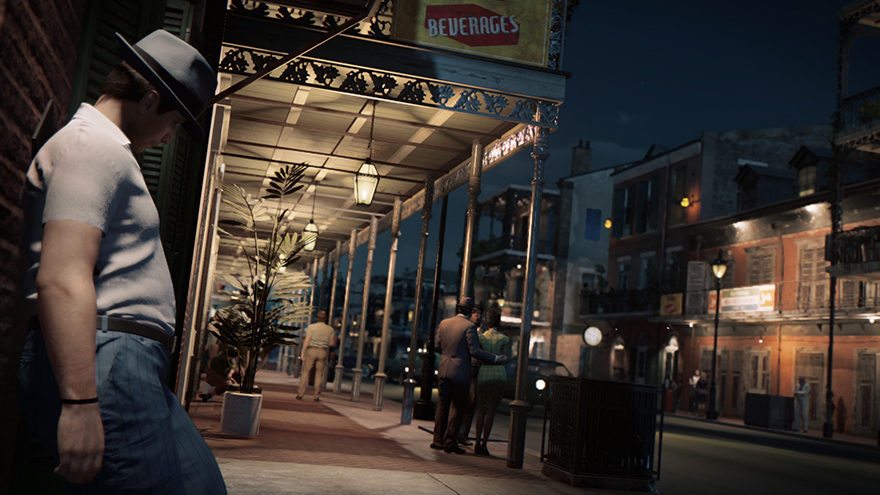 One of the currents running through Faulkner’s Absalom, Absalom!, and indeed the Southern literary tradition at large, is the difficulty of telling about the South. In the quote above, Quentin Compson relates a story from his home in Yoknapatwpha County, Mississippi to his Harvard roommate Shreve. As Quentin attempts to untangle a web of hearsay, gossip, legend, and myth, he ruminates on his tired apostleship about “Southernness” as if it can be explained through a complex body of literatures—much less a dorm room conversation. Talking about the South is, more often than not, an exercise in frustration because it is such a loaded symbolic place with a guilt-ridden and complicated history.

This is why I approached Mafia III with a sort of cautious optimism. As a native Mississippian, I’ve often thought of the American South as a place neglected by videogames. Sure, The Walking Dead Season 1 (2012) and Season 2 (2014) offer some good Southern gothic horror, touching on themes of race and place only tangentially in an post-apocalyptic South. Kentucky Route Zero (2013-16), too, takes the player on a tour through the mythic South in a way that draws from the works of Flannery O’Connor or the Appalachian fiction of Cormac McCarthy.

But Mafia III’s New Orleans-style setting (New Bordeaux in the game) and Dixieland crime story potentially offered a digital South from a perspective I hadn’t yet seen. Lincoln Clay, an African American Vietnam veteran, has returned to his home in New Bordeaux only to have his friends and family murdered by the Italian mob for whom they worked. Lincoln recovers, then starts carving his way across the city and claiming turf to weaken the mafia leader Sal Marcano. It’s a revenge tale as direct and simple as they come, but its Southern setting was promising enough to engage with the region’s history and the legacy of its literary giants. Even its narrative structure of a story told in flashbacks and documentary-style interviews show something of a Faulknerian approach to the slippery concept of truth amid rumor in Southern fiction.

All that unique setup steadily erodes, however, when Mafia III settles into a routine that reveals it is not a game about the South but, rather, just a game that takes place there. My first clue was the music. As soon as I got in a car, I fiddled with the radio stations hoping to find some New Orleans jazz. The closest I came across was John Lee Hooker playing his muddy Mississippi delta blues—no Kid Ory, no Professor Longhair, not even a bit of Dr. John. The radio scrambled out a collection of Motown hits and some rock n’ roll anyone could identify as “authentic” for its 1968 time period, but the flavor, the sense of place, wasn’t there.

a guilt-ridden and complicated history

This feeling sank in deeper as New Bordeaux began to look like every other digital open-world city I’ve visited. For every street that approximated a real-world counterpart like Canal or Bourbon, I found something in the city that felt off. The people lacked uniqueness, or the accents did not vary enough. I walked Lincoln around the French Ward, the game’s version of French Quarter, and found it not all that distinct from other digital cities I’ve visited. It doesn’t help that Lincoln never seems to appreciate New Bordeaux as his home rather than a series of sections to conquer, and, consequently, all the trappings of New Orleans serve as set dressing for his war of righteous anger and revenge.

The truth is Mafia III could have been set anywhere because it’s not about the South or even the racial tensions of 1968. Mafia III uses this time and place as guilt-free context for some contemporary catharsis. While there are certainly problems in using the Civil Rights-era South as shorthand for a racist time and place, Mafia III’s deplorable gangsters are so cartoonishly bigoted that the taking of the city can becomes an exercise in guiltless glee.  Few videogames can match Mafia III’s  grindhouse exploitation thrill of driving a truck decorated with a painted Confederate flag into an upper-class garden party and unloading several clips into members of the Southern Union, the game’s version of the KKK.

The scripted sequences in the game, too, show some understanding of the South’s unique potential for videogame storytelling. A shootout on a riverboat, for instance, spills out into the swamp and ends with the public display of a political influencer’s corpse hanging from the game’s version of the equestrian Andrew Jackson statue in Jackson Square. In another mission, Lincoln blasts his way through a theme park haunted house built from racist depictions of Haitian people complete with zombies and what I assume are rougarou (werewolves from Cajun folklore)—a cheap, vulgar monetization of black and Cajun cultures for white entertainment. Even the sitdowns with Lincoln and his lieutenants take place in an old plantation to mark a shift in racial power for the city. In these moments, the game uses those symbols we associate only with the South to dismantle their established narratives of white supremacy.

it’s not about the South

Unfortunately, between these clever pieces of Southern-fried righteous anger with the rote trappings of modern open-world games, Lincoln accepts missions to disrupt Marcano’s control over the city from stock characters that are met and forgotten in a way that seems at odds with the Southern setting. In killing his way up the mafia tower, Lincoln never comes across as more than a tourist in his own city, going through the motions of every other open-world protagonist: drive to a place, assassinate the gangster, interrogate the snitch, smash or steal the target. Lather, rinse, repeat. Even though Lincoln’s goal is the destruction of New Bordeaux’s Dixie Mafia rather than climbing through its ranks, any sort of pretense of profundity in his revenge-porn rampage gets lost in the numbing patterns of open-world tedium.

Ultimately, Mafia III is a game that’s held back by its conventional anchors. It wants to be game about the South but remains content to use its setting rarely as little more than a local color curiosity. It proposes a radical representation of race but falls prey to the conventional chores of open-world banality. Though it initially seems eager to “Tell about the South,” Mafia III does not have the patience or interest to do so. Its violence and exploitation-style racial politics, however, make the trip to New Bordeaux worth effort—as long as the person heading down South isn’t looking for anything more than a sightseeing tour.