Final Fantasy VI (1994) is deeply concerned with the relationship between human beings and technology. The game liberally borrows elements from Western heroic fantasy and science fiction, yet the story and action are centered around two young female protagonists, Terra and Celes, who are variations on the “magical girl” and “beautiful fighting girl” archetypes of late-20th century Japanese pop culture. Placing Final Fantasy VI within the broader context of Japanese society in the 1990s can give us a new perspective on a classic and iconic videogame while also enhancing our understanding of many of the narrative tropes and conventions of JRPGs.

Final Fantasy VI uses gender as a lens for its exploration of the intersections between biology and technology. The social otherness culturally associated with young women provides a powerful analogy to anxieties surrounding changing definitions of fundamental humanity, expressed in debates concerning issues from organ transplants to oral contraceptives. As in many pop cultural texts in contemporary Japan, Final Fantasy VI explores its posthuman themes through the bodies of its female characters, using Terra and Celes to represent optimism concerning the possibilities for the future of the human species in relation to seemingly magical biotechnologies.

The plot of Final Fantasy VI contains many story elements common to contemporary fantasy and science fiction. A thousand years after an unspeakable cataclysm, the human race is once again on the cusp of an industrial revolution. At the beginning of the game, a technologically-advanced nation referred to as “the Empire” is making territorial gains but is being undermined by a small rebel group. The atmosphere of Final Fantasy VI owes an aesthetic debt to the retro-speculative genre of steampunk, which American author Jeff Vandermeer calls a subcultural movement that “embraces divergent and extinct technologies as a way of talking about the future.” In the world of the game, magic co-exists with technology, but it is not used as a direct analogy for technology, nor is it antithetical to technology. Magic also does not serve as a clear allegory for nuclear power, as it arguably does in Final Fantasy VII (1997), and other games in the Final Fantasy series.

That being said, the games consistently link magic with femininity. The female characters of each Final Fantasy game are associated with a unique system of magic that drives the plot and ultimately saves the world. It’s interesting to note that almost all of these women are only half human, if they’re human at all. For example, Aerith Gainsborough from Final Fantasy VII is a descendent of an alien race and is thus able to communicate with the magical energy of the planet, which has been exploited by a corporation whose activities threaten human and natural ecosystems. Likewise, Lightning Farron from Final Fantasy XIII (2009) becomes a l’Cie—a being granted supernatural powers so that she may restore the balance between the natural world and the technologically-advanced society of human beings. In Final Fantasy games, there is a connection between magic, the nonhuman, and femininity. This is also the case in Final Fantasy VI, whose story is centered around the intertwined quests of its two protagonists, Terra and Celes. 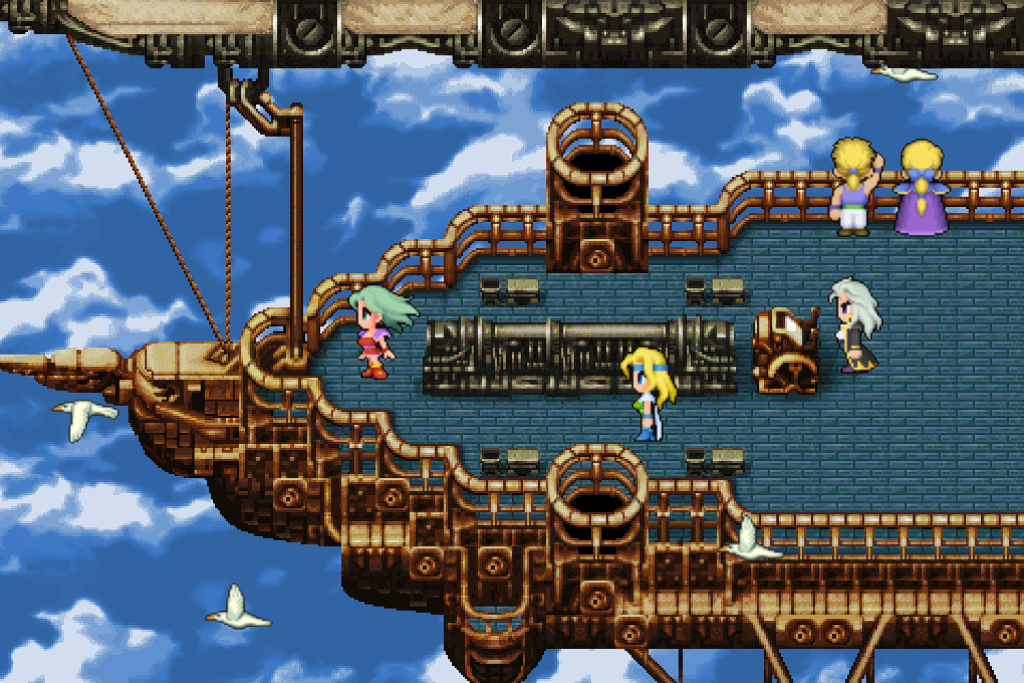 Terra and Celes in Final Fantasy VI for Android

Terra is the daughter of a human mother and an Esper father. Espers are creatures that were engineered to serve as living weapons in an ancient war, and their magic is so powerful that they unwittingly brought about an apocalypse in the distant past. After the Empire finds the last remaining haven of the Espers, Terra is kidnapped and brainwashed into becoming a soldier. At the beginning of the story she is repeatedly referred to as “an imperial witch” and feared by the other characters, who only gradually come to appreciate her ability to use magic. Terra, whose existence symbolizes the possibility of a peaceful relationship between humans and magical power, is the focal point of the first half of Final Fantasy VI, in which the player’s goal is to help her gain knowledge of her origins and act as a bridge between humans and Espers. She is characterized by her ability to invoke a transformation from her normal human persona into her bright pink and glowing Esper form—an ability that associates her with magical girls (mahō shōjo), who can invoke powerful magical counter egos at will.

The second half of the game focuses on Celes Chere, a general in the imperial army who has been artificially infused with the essence of captured Espers, a process that has given her the ability to use magic. Like Terra, Celes is 18 years old, but she is powerful enough to have already attacked and burned at least one major city prior to the events of the game. Unlike the other characters, Celes is not frightened of Terra’s magical abilities, nor does she wish to exploit them. Instead, she demonstrates concern over Terra’s humanity, seeing her as a person instead of as a means to an end. Celes’s lithe and slender form, when juxtaposed against her sword and the geopolitical conflict in which she has become a key figure, calls to mind the conventions of the “beautiful fighting girl” (sentō bishōjo), whose female-coded compassion is often portrayed as the solution to an otherwise unwinnable war.

In Final Fantasy VI, as in other Final Fantasy games, the ultimate fate of the world rests in the hands of young women who wield extraordinary magical powers. Given the conventions of many works of science fiction and fantasy in the 20th century, in which the main protagonists have typically been male, the game’s narrative emphasis on Terra and Celes is striking. Where do the “magical girl” and “beautiful fighting girl” archetypes come from, and what do they signify?

The 1990s were a high water mark in a tide of magical girls and beautiful fighting girls. This is the decade in which the Sailor Moon manga and anime took Japan by storm before being exported to the rest of the world, where it was soon followed by other stories of young women with sparkling eyes who fought evil in colorful miniskirts. One of the most iconic beautiful fighting girls of the decade, Rei Ayanami from Neon Genesis Evangelion, would not appear until 1995, but the eponymous Nadia of Nadia: The Secret of Blue Water was an otaku darling by the time the anime’s last episode aired in 1991. The magical and martial heroines of Hayao Miyazaki, such as Nausicaä from the 1984 film Nausicaä of the Valley of the Wind, were easily recognizable to broader audiences as well.

Influential Japanese cultural critics (most notably Tamaki Saitō, the author of an academic monograph on cute girls in anime) offered various interpretations regarding what these young female characters represented to male audiences, who were accused of being pathological, infantilized, and removed from consensus reality. Meanwhile, North American scholars and cultural critics expressed strong feminist concerns over the sexualization and objectification of young female characters, especially as various aspects of an ideal femininity were commercialized as part of a broader transnational market cultures of capitalistic cuteness. 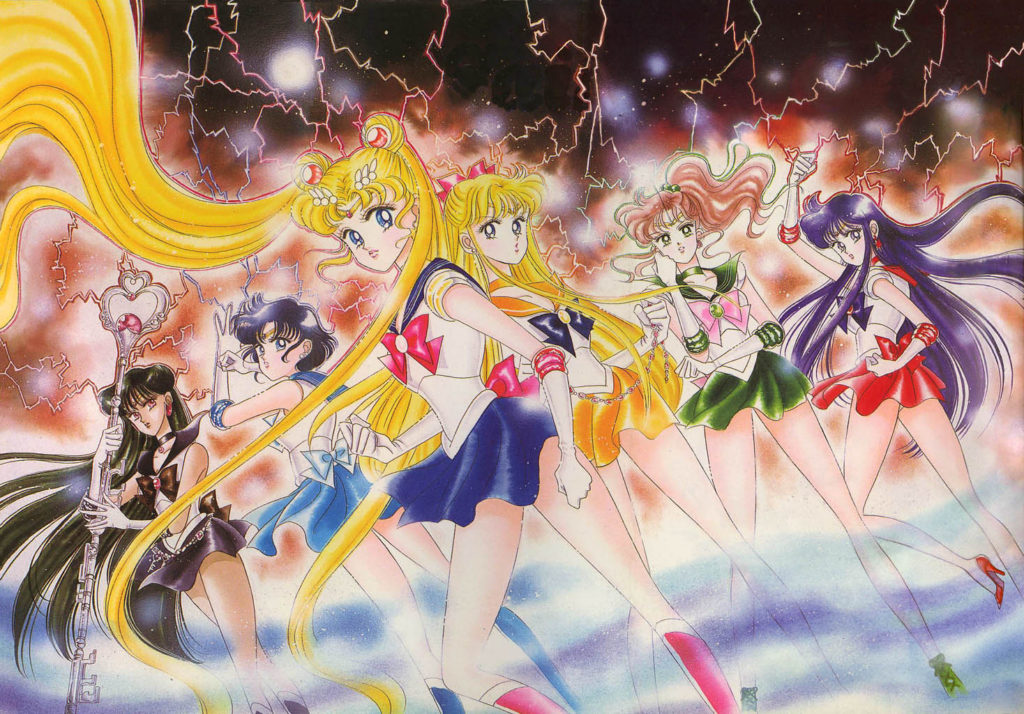 Focusing on the constructions and renegotiations of gender and selfhood enacted by these magical girls neglects broader ontologies of selfhood, specifically as they intersect conversations concerning what it means to be human, less than human, and more than human—or “posthuman.” Videogames are uniquely positioned to explore issues of posthumanism, as they require the player to engage deeply with the digital and the symbolically nonhuman. In videogames, the player must actively identify with and as an artificial construct.

This posthuman identification provides a unique means of engaging with the bioethical debates that shook public discourse in Japan during the 1990s. This era witnessed a number of political and legal upheavals, many of which were related to the boundaries of the human body. In a 1998 article on the disputes over brain death, science historian Margaret Lock demonstrates how the most intimate facets of the human body are regulated by culture and society. Even something as fundamental as death is “conceptualized not merely as a biological process,” Lock writes, “nor even simply as the demise of an individual, but also as a social process, and it is the involvement of the social order that remained the most important signifier for the majority of Japanese commentators.” Other bioethical issues that came under intense public scrutiny at the end of the millennium were organ transplantation, euthanasia, artificial insemination, and birth control by means of oral contraceptives for women.

Videogames are uniquely positioned to explore issues of posthumanism

The movement to legalize oral contraceptives is of particular interest to the study of popular media, as it overlapped closely with images of young women in news and entertainment media. Sociologist Chizuko Ueno has recounted the intensity of the sexism suffusing debates over birth control pills, in which effective and affordable family planning was repeatedly linked with sexual promiscuity and the spread of sexually transmitted diseases, as well as misinformation concerning health hazards. After a strong push by a group of feminist lawyers and politicians, oral contraceptives became legal in Japan in 1999, but not before the matter was dragged through the realm of popular culture, in which antisocial male media fans were pitted against supposedly delinquent teenage party girls, as well as their counterparts in anime and manga. Apparently, neither real-life nor fictional girls were doing the nation of Japan any favors by refusing to settle down into nuclear families.

In short, the animated, illustrated, and virtual bodies of the young women of Japanese media in the 1990s were not merely symbols for changing gender roles; they were also facets of larger conversations in which the physical bodies of real young women became a notable point of contention in public conversations concerning the changing relationships between medical technologies and the social ontologies of humanity that these technologies challenged.

The two protagonists of Final Fantasy VI, Terra and Celes, are strongly informed by their social context, in which young women were positioned as potentially half human and half “other” in bioethical debates. The magic associated with these two women can be read as a type of posthumanism, or the possibility of technologically enhanced humanity that is rendered less threatening by its association with youthful femininity. By the end of the game, the otherness of Terra and Celes has all but vanished as the male characters learn to use magic due to the player’s efforts. Most players will have come to accept the “otherness” of Terra and Celes as natural over the course of the 40-hour story, both because the use of magic confers a definite advantage in gameplay and because of the emotional identification implicit in the active roleplay necessary to advance within the game. The player learns to accept that the boundaries defining what it means to be human are much more porous and liminal than they seemed at the beginning of the story. 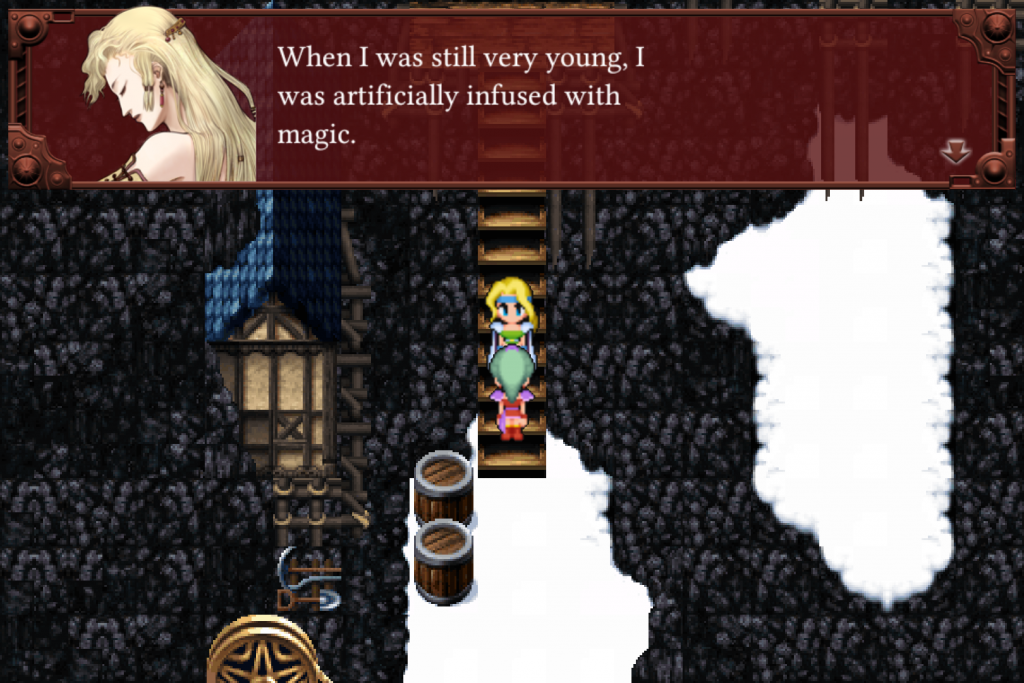 As media critic Henry Jenkins has argued in his seminal 2002 essay “Game Design as Narrative Architecture,” when we read videogames, it can be productive to focus on “examining games less as stories than as spaces ripe with narrative possibility.” Magic and gender in Final Fantasy VI are not merely themes, but active elements of gameplay deeply embedded within the narrative. Likewise, Terra and Celes are not characters to be consumed, but identities to be embraced and managed. The posthuman otherness of magic, which serves as a representation of both the possibilities and the anxieties embedded within debates on bioethics of the 1990s, is enacted through Terra and Celes, who become the avatars of the increasingly sympathetic player.

In Final Fantasy VI, magic—as both a narrative theme and an interactive element of gameplay—functions as a multivalent cipher for posthuman bioethics, while the culturally ascribed nonthreatening cuteness of femininity endows the destabilization of human identity with positive emotional connotations. The end result is that the world is saved, and humanity, in all its forms, can bravely continue on into an optimistic future.