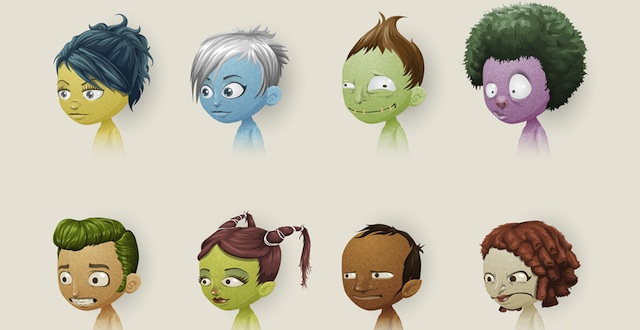 Glitch is a new, browser-based massively multiplayer game that hopes to expose social gamers and burnt-out World of Warcraft refugees to a kindler, gentler, and much weirder kind of experience. With a quirky, hand-drawn visual style and player characters that look more like characters from a Mike Judge cartoon than a Boris Vallejo painting, Glitch already feels quite different than most MMOs. And rather than slay dragons, players explore a surreal wonderland housed in the imagination of 11 giants. They leap around platforms à la Mario and engage in quests embedded with stealthy double entendres—one dubbed “Happy Ending” tasking players with milking butterflies for their precious fluids. This outsider angle may be due, in part, to the fact that Katamari Damacy creator Keita Takahashi is on the design team. But Glitch has always had some counter-culture in its DNA. We talked to Tiny Speck founder Stewart Butterfield on the eve of the launch to learn more about how and why Glitch was made.

Most massively multiplayer online games pull the majority of their inspiration from either Star Wars or The Lord of the Rings. Is there a cultural touchstone for Glitch?

I think there is, but we’d have to point to a lot of things, rather than just Lord of the Rings or something like that. Monty Python, Dr. Seuss, early Japanese games—a whole big variety of stuff.

Scattershot influences make the game a little harder to pigeonhole.

Glitch is pretty sui generis. It’s really its own thing. I think that’s an advantage for us, and it’s also a disadvantage because people have to kind of locate it in their conceptual section all by themselves.

There’s a trend in movies and games to name the product exactly what you’re getting. Plants vs. Zombies.

There are a number of people who have hooked onto that and made that the pun—anytime there’s an error in the game or something goes wrong. I didn’t realize the number of times it came up in the context of games, but [glitch] seems to be the go-to noun for things that are wrong in games.

Are you embracing this decision to take on a difficult name?

The backstory and the name give us a lot of latitude. The whole world is being imagined in the collective imagination of these 11 giants. It’s a good pretext for the world changing styles as you move around. Which is something that we really wanted to do in an art-development sense. And also as an excuse for how absurd things are.

Calling it Glitch and having that backstory means we’re pretty free to do any of those things without having to worry about breaking these notions that somebody studied Tolkien and knows the particulars of how trolls should be, and stuff like that.

You’re also hoping to appeal to an audience who doesn’t have those concerns.

There are people who play in a really serious way, trying to find the optimum combination of skills to maximize the benefit they get in-game and from in-game activity. But they can do that without having to take themselves too seriously. You know they are free to join in the absurdity and the humor and whimsy, and not have to keep in character with their level 13 fire mage.

Those tropes can be unwelcoming to other audiences.

This is also an art style. It looks really different—hand-drawn and using traditional illustrations. There are no 3D models or anything like that, which we thought would be a time saver, but actually makes it a lot harder to upgrade. But it also makes it much more approachable. Sometimes the veneer makes people think it’s for kids. It’s definitely for adults. Not X-rated. I just mean for grown-ups.

Some of the quests in Glitch are spiked with juicy double entendres.

When you make something for kids—specifically for kids—it can be much harder for adults to enjoy it. Some people do a great job on that stuff. The Simpsons has done a great job historically. And Pixar movies and stuff like that can operate on multiple levels. I feel like we do that, to a certain extent.

But Glitch really isn’t a kids’ game. I assume mostly adults will be playing.

If you’re playing a multiplayer game with other people, for many adults it’s not very much fun to play with kids. There are some very mature ones. But kids, obviously, tend to be less mature. They’re not going to be as interesting to talk to.

You could say that for a lot of adults.

How do you encourage adults to behave in an interesting manner? In the old days of online gaming there were people who dedicated themselves to role-play. Do you have to code something into your game to corral players in that direction?

No, we try to leave it pretty open. That’s part of not taking too seriously—being called Glitch and being all absurd. All of those aspects really help a lot. At the same time, I think the people who are getting the most out of the game and doing the most to ensure that other people get a lot out of the game are the ones who are developing these personas.

There’s a player named Don Draper who has already added verisimilitude to the rest of the world because he’s using a Mad Men character’s name. But in the game he’s a big-time Purp dealer. Purp is short for purple flower, which is one of the herbs you can grow in the herb garden. It is mildly hallucinogenic. He plays that up like he’s a big-time drug dealer. He’s cultivating that and giving it to people and trying to get them hooked and stuff. He’s having a lot of fun doing it and he’s definitely creating a lot of fun for other players as well.

Early on one of the richer players formed a bank and created their own currency. There’s a skill in the game called Penpersonship, and you can use it to create notes. And they would guarantee their notes with in-game currency and they would validate them by using time stamps and stuff like that.

Really early on we introduced tree poison. And immediately somebody formed a lumber company and went around poisoning all the trees in public areas. Because once trees are dead, you can chop them down and get planks.

They knew, totally, when they did this it was going to piss a lot of people off. But it sparked a lot of emergent play. Suddenly there was a tree protection group using in-game chat channels to coordinate and run around with tree-poison antidote, following behind the poisoners.

These stories remind me of the stories that come out of EVE Online.

I was just saying that the other day. EVE is my favorite game to read about. Now, I can’t play it. It’s too hard. It is too involved and everyone’s too serious. But reading the stories about what goes on in the game is awesome. I love it.

What kind of stories are you hoping for in Glitch?

My favorite description of Glitch is what one player said: “A massively multiplayer online environment in which you gather resources and learn skills so as to devise ever more creative ways in which to do nice things for each other.” It’s the potlatch. People are getting really rich so they can put on a great feast for all their friends. And what a great feast means evolves over time.

Your contribution is to expose people to beautiful art.

One of the privileges of working on this is that we raised a lot of money, and this is a big ambitious project; and we get to spend more money on illustration then anyone but really big magazines. Our budget for illustration is big. And it’s nice. Because I like illustrators and admire their work. And we get to support them.

Can you talk about specific artists and their contributions?

The guy who designed the Dr. Seuss-y area in Glitch is Chris Leavens. He is an illustrator based in L.A. For people who know him—and he has a following in the illustration community—it’s really distinctively his style.

The woman who designed Uralia and the Iimenski Caverns where people go mining, her name is Zutto. She lives in Miass, Russia. So the names of the locations she designed all have Russian names. In fact, one of them is named for the street that she lives on.

What were you going for with the look of the game’s avatars?

Do you know Reggie Watts? I guess he’s a musician. I’m not sure if he’s more musician or more artist. He has a song called “Fuck Shit Stack.” In the video for it they do some processing so that his head is really big and his body is small. We watched that and were like, “Oh, that’s the perfect ratio.”

“It’s not about how many points it costs you to do this.”

They’re interesting-looking. Mine wound up looking like a depressed metal fan.

We wanted something that was accessible, but not too cartoony. Definitely not huge boobs and tiny waists for the women and giant muscly arms for the guys. Because it’s just been done so many times.

And they’re way more distinctive than the bland social-game avatars.

They all look so generic to me. They all look the same, I mean. You can’t identify what the game is. And it’s obviously a really important aspect of creative expression for people.

I am obliged, now, to ask about Keita Takahashi’s contributions to Glitch.

He has a lot of independence and is working on all kinds of stuff now for us. His English is much better now than it was two months ago when he first started. There’s been deep immersion. He’s not working on the core game mechanics—where we have spreadsheets rigged up to figure out how long something should take or how much it should cost. He’s working on quests, UI, mini-games and, in general, being the spiritual guide and/or muse for the rest of the team.

Anything exciting that he’s come up with?

One of the things he’s working on is iOS games—mini-games. And just last week we released a developer site and there’s an open API. One of the things we’re hoping is that people will make all kinds of games that tie into Glitch but that are playable on mobiles.

I don’t imagine that a design meeting with Takahashi is a typical PowerPoint affair.

He has singlehandedly invented the animated GIF as the design spec. It’s fucking hilarious. Someday we should publish the stuff that he does, because heavily Japanese-inflected English is funny enough to begin with. He’s super-evocative and emotive, rather than game mechanic in a mechanical sense. It’s not about how many points it costs you to do this. It’s about the emotion that’s supposed to be drawing you in toward this, and the emotion that’s supposed to come as a result.