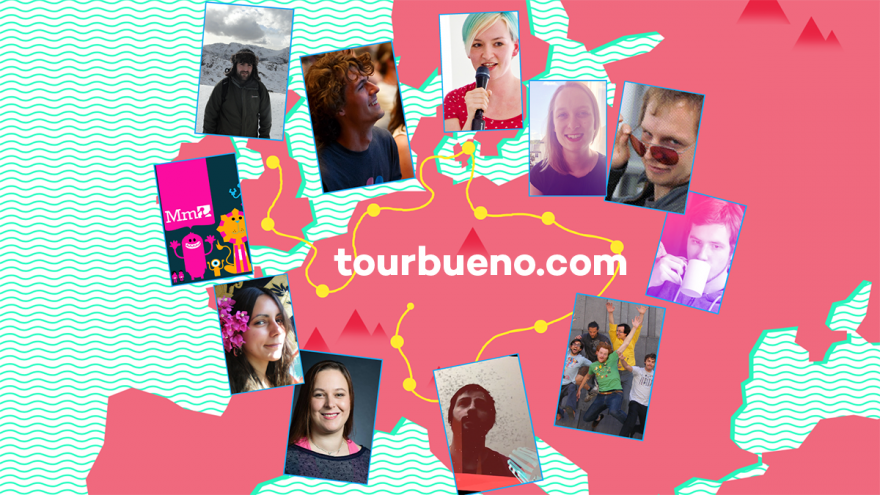 Major Bueno, the two-person team who made big waves in 2013 with their hilarious OneGameAMonth (1GAM) escapades, has finally come back to the spotlight. And, thankfully, they’re beard-ier than ever in the announcement trailer for an upcoming 2015 project.

After a year of virtual silence, Major Bueno is setting out on their most ambitious adventure yet. Tour Bueno will road trip across nine European countries and eleven cities in seven weeks, collaborating with some of gaming’s most well known Euro indie developers to produce eleven 48 hour games that coincide with a web documentary episode detailing the creative process. Phew. Just writing that sentence has left me exhausted—so I can only imagine how many Red Bulls the Major Bueno team, made up of Benedikt Hummel and Marius Winter, will need in order to get through it.

Some of the most recognizable entities Major Bueno will be collaborating with include: Luke Spierewka (SUPERHOT), Pietro Righi Riva (FOTONICA), Broken Rules (Secrets of Raetikon), and Ed Key (Proteus).

But their focus isn’t only on the creatives behind some of the most celebrated grassroots devs in Europe. In the Tour Bueno announcement page, Bene and Marius also admit that they “have no clue how the process of finding ideas and being creative actually works. The only thing we know right now is that there isn’t a clear instruction you have to follow to find a good idea.” Which is why they’re also visiting the crunch-time and brainstorming implementation experts of game making like Sos Sosowski, co-organizer of 7dfps gamejam and inventor of the 0 hour gamejam.

“Trust your feelings and learn from others.”

“We think the only way [to think of and follow through on good ideas] is to try it over and over, to do what you love to do, and follow your passion,” the Major Bueno team writes. While they advise others to “trust your feelings and learn from others,” they hope the web documentary portion of Tour Bueno, capturing a rare behind-the-scenes look at the speedy development process, will provide much more concrete examples of the theory in action.

Of course, while they can always learn for others, Major Bueno is already more than qualified to provide the Internet with wisdom on succeeding in a fast paced development project. As Bene said in an interview published on the Gamasutra blog regarding what they discovered from the 1GAM challenge, “by releasing our games the minute we finished them, we always received immediate response from players, so we would always know instantly how our ideas worked out. That way we learned a lot about game design.”

For a taste of Major Bueno’s fantastically pithy and witty sensibilities, check out their freeware repertoire from 2013. Drop A Beat, Giuseppe! both Bene and Marius’s favorites from the 1GAM challenge, stars the worst pianist in the world attempting to save himself from a crowd’s food-chucking displeasure. “We managed to connect both super enjoyable and unique arcade gameplay with a touching emotional twist,” Bene explains. Marius agreed that “the controls imitate the physical ‘piano bashing’ nicely, and puts you in the right pianist-mood.”

A few of their other most loved games include: the day dream-driven Brawlin’ Sailor, the Tim Schafer-centric Host Master Deux: Quest for Identity, and (my personal favorite) the lion-eating adventures of a judgmental emperor in Caesar’s Day Off. Finally, the team finished their explosive year with Party Bueno, an online celebration and thank you to fans, inviting everyone to submit character drawings that just might end up as a party-goer in their virtual year-end bash. Major Bueno received 750 submissions total and used every one of them, including work from Pendleton Ward (creator of Adventure Time) and Double Fine founder Tim Schafer.