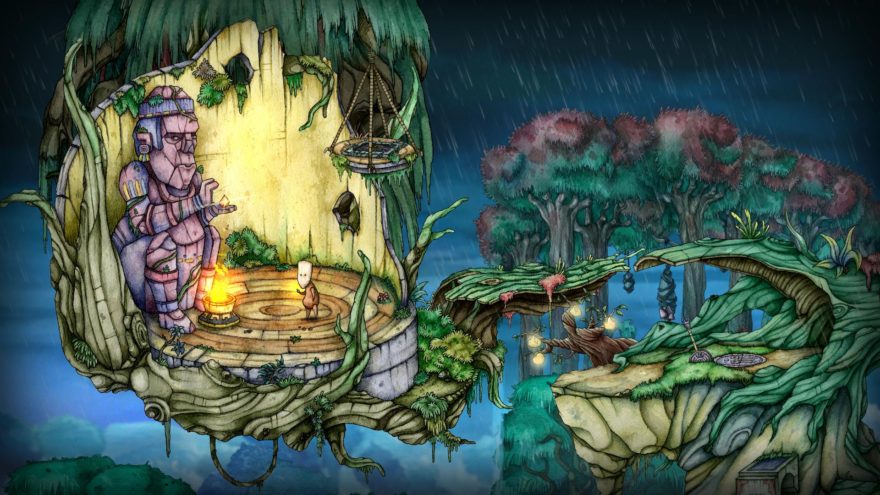 Four years ago, Spanish duo Jose A. Gutiérrez and Miguel Vallés were still at university but had dreams of creating their own videogame. They were naive back then: Gutiérrez had spent years drawing and doing a Fine Art degree but had never done animation before, while Vallés was studying Software Engineering but had never worked on a videogame until then. And what they were trying to achieve is something that Gutiérrez now describes as “absolute madness.”

They had €3000 that they had won for coming first prize at a small entrepreneurs competition hosted by the University of Zaragoza. What they had entered was a comic, originally made by Gutiérrez for an illustration workshop, that outlines the world and characters of Candle—which would become the videogame they worked on for the next four years. It didn’t take long before they “realized why no one had ever made a game fully painted with watercolors and no digital tools.”

That first year was spent with both of them simply learning the processes that they needed to know by heart to make Candle. Any progress was often trashed and begun again as they developed these skills rapidly. But eventually the hard work paid off as the pair had managed to put together something that looked special. “It didn’t look like an animated painting; it WAS an animated painting,” Gutiérrez recalled. The game’s look was enough to land them an office in a business incubator, a bigger team, and funding from another entrepreneurs competition as well as Kickstarter.

you can easily lose the quality of the original paintings

The workflow that they had to establish to get Candle to that point includes finding the right way to paint with watercolors, convert them to digital files, and then import them to the Unity engine so they can be pieced together with code. To fully explain and demonstrate it, Gutiérrez and Vallés put together a making-of video that you can watch below.


What isn’t covered in that video is that one of the main difficulties with creating a game entirely with watercolors is that you can easily lose the quality of the original paintings when scanning them into a computer. The tool that saved Gutiérrez’s and the other artists’ work during the transfer was 2DToolkit, made by Dinesh Kumar, with whom the team worked with to develop further to meet the demands of Candle. “2DToolkit offered us a full workspace to develop all the 2D content for Candle: build all the assets, handle the sprites atlases, create and preview the animations, along with a lot of optimization options to manage the textures’ size,” wrote Gutiérrez.

From there, it was just a case of putting in the hours to finish Candle. And now the team has done that: Candle was released for Windows, Mac, and Linux yesterday. It’s a game that has you control a masked kid called Teku who has to save the Shaman of his tribe with his intuition and the help of the tiny candle on the end of one of his arms. It’s a surprisingly tough little game given how friendly it looks. You’ll need to make sure you examine all parts of the environment in order to survive—a design choice that takes full advantage of the hand-made nature of the game, every detail given due care and attention.

You can find out more about Candle on its website. It’s available to purchase on Steam, GOG, and the Humble Store.